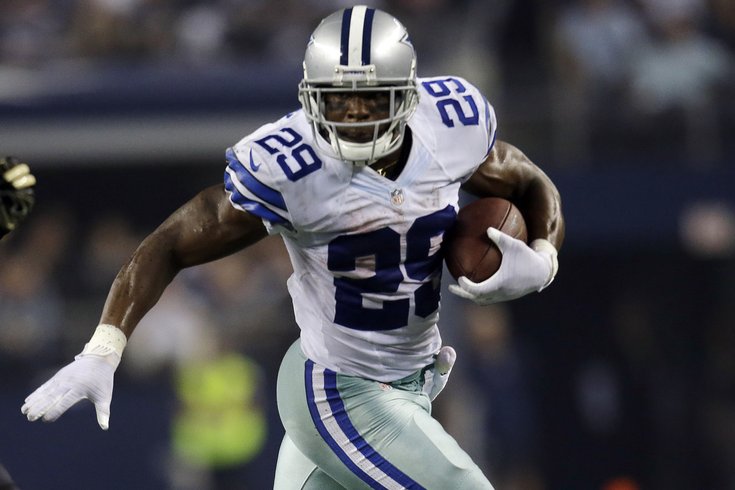 After more than a week of intrigue at the running back position, the Eagles have landed themselves a bell cow. The Eagles announced Thursday night they have signed former Cowboys RB DeMarco Murray after signing former Chargers RB Ryan Mathews earlier in the day.

It is a five year deal worth $40 million in base salary, $42 million max, with $18 million fully guaranteed.

"You have to run the football in this league and that's what we believe in," said Chip Kelly. "That's what we've always believed in. We lost a very talented running back and in making that decision, in losing LeSean (McCoy), how do you replace a player of that caliber? And that's what we did."

“I felt that this was a great opportunity to win a Super Bowl," Murray said. "I’m glad and fortunate to be here. It's a great organization. It's a privilege and an honor … ready to get started.”

The effect of the Murray signing is twofold. The Eagles get an elite back while simultaneously weakening a divisional opponent that won 12 games and the NFC East title a year ago.

Murray said he had better offers on the table. "It definitely wasn't the biggest contract, but there was something about this organization, about the team, that caught my eye," said Murray.

“I felt that this was a great opportunity to win a Super Bowl. I’m glad and fortunate to be here. It's a great organization. It's a privilege and an honor … ready to get started.”

Running behind a very good offensive line, Murray led the NFL in 2014 with 1845 rushing yards, with the next closest player being the Steelers' Le'Veon Bell, who had 1361. That’s a difference of 484 yards.

Murray had an enormous workload last season for Dallas, which was a major key to their success. Including the playoffs, he had 436 carries and caught 61 passes, for a total of 497 touches. The Cowboys sustained long drives by repeatedly feeding Murray and converting manageable third downs. The Cowboys’ commitment to the run kept their suspect defense off the field, and made life far easier on Tony Romo, who led the NFL in passer rating.

Murray’s style of play is a contrast to that of LeSean McCoy. Murray is more of a “see hole, hit hole, run through tackles” type of runner, while McCoy was a more electrifying “make you miss” type of back.

Murray played in college at Oklahoma with recently acquired Eagles quarterback Sam Bradford, who said during his initial press conference on Wednesday that he was trying to recruit Murray to Philly.

The Eagles had their share of running back drama over the last week-plus. First they traded 2013 rushing champion LeSean McCoy to the Bills for ILB Kiko Alonso. And then earlier this week, the 49ers’ Frank Gore had agreed to terms with the Eagles, but eventually changed his mind and instead signed with the Colts. Then yesterday, Mathews had reportedly agreed to terms on a deal with the Eagles, which appeared to be in doubt when Murray's talks with the Eagles escalated. But the Eagles got deals done both with Mathews and Murray.

An updated view of the Eagles’ starters on offense:

And let's update the Eagles' gains and losses, in stick figure form: