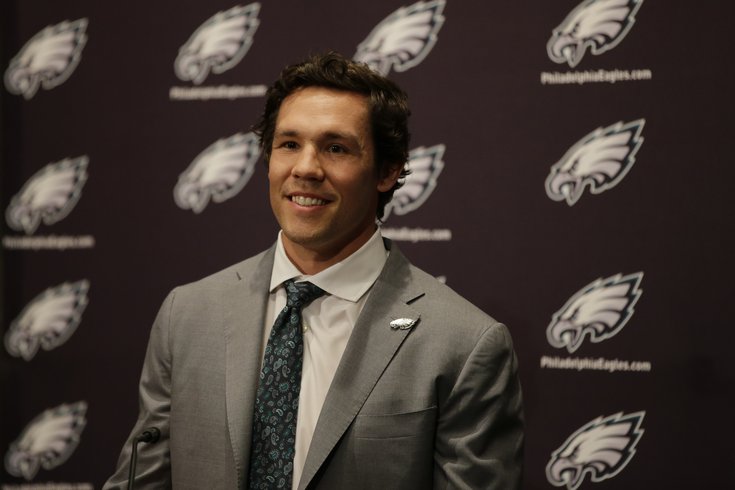 Sam Bradford addressed the Philly media for the first time after the Eagles traded for him yesterday. During his press conference, Bradford revealed that the Eagles and Rams had been working on the deal for quite some time.

"This has been in the works for a while," said Bradford, "so it didn't totally catch me by surprise when it happened yesterday."

"I knew this was a possibility for probably three, four weeks."

The Eagles are trying to sell Bradford as their franchise quarterback. Chip Kelly, for example, tried to "dispel" the notion that the Eagles were angling to move up in the draft to get his former protege Marcus Mariota, and went as far as to say they haven't contacted anybody about the cost to do so.

Typically, when NFL teams trade for quarterbacks, a contract extension follows shortly thereafter. And yet, while the Eagles and Rams have been in discussions for "three, four weeks," those contract extension talks have not yet begun. Bradford was asked if he would consider signing a long term deal if the Eagles approached him about it.

"I haven't gotten that far yet," said Bradford. "I'm still trying to comprehend this. I'm sure that is something that will happen down the line. Until that happens, I really don't know."

Meanwhile, Kelly went out of his way to let the rest of the league know they already had a trade offer of a first round pick for Bradford in hand.

We're in the thick of smokescreen season. If and when the Eagles agree to a contract extension, you can forget about the Eagles moving up to draft Marcus Mariota.

Until that happens, Mariota is in play.