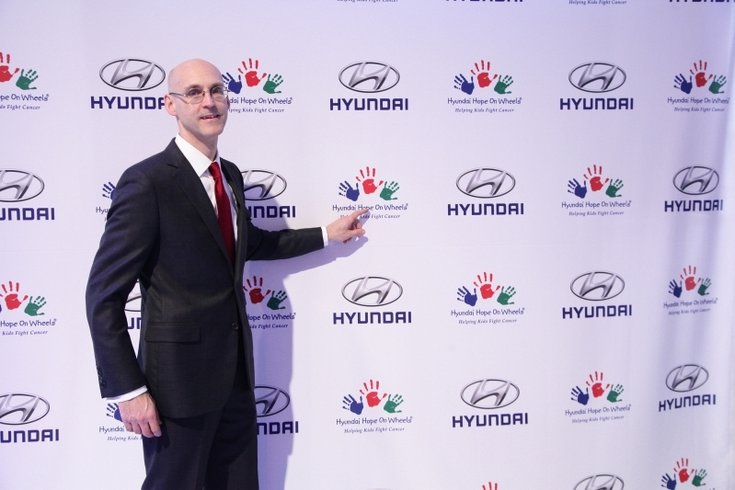 Dr. Richard Aplenc of the Children's Hospital of Philadelphia has won $1 million to study therapies for pediatric cancer.

A pediatric cancer specialist at the Children's Hospital of Philadelphia has been selected among five researchers to receive a $1 million "quantum" grant from the nonprofit Hyundai Hope on Wheels.

Dr. Richard Aplenc, a specialist in pediatric acute myelogenous leukemia (AML), will organize a team to investigate new treatments for the blood and bone marrow cancer. The researchers will specifically attempt to identify surface cell proteins in AML and work toward the development of therapies on the molecular level.

"His work in particular is some very exciting work using immunotherapy and trying to better understand the characteristics of how the body can fight this disease," said Zafar Brooks, the non-profit group's director.

One of Aplenc's very first patients was diagnosed with AML, an experience that changed the trajectory of his career and research. As an associate professor of pediatrics at CHOP's Center for Pediatric Clinical Effectiveness, Aplenc works on improving outcomes for children with AML and other cancers.

In the past, Aplenc received a National Institutes of Health grant to investigate genetic predictors of AML treatment response, including relapse and infection risk. His latest research focuses on discovering genome-wide genetic variations that influence the risk of treatment complications in pediatric AML patients.

Hyundai Hope on Wheels aims to help kids fight cancer by funding innovative research and creating public awareness. Proceeds from every U.S. Hyundai purchase support the nonprofit's cause, which has directed more than $115 million since 1998 toward 700 pediatric cancer research projects around the country.

Two other Quantum Award winners this year are also working to combat AML, but taking different approaches towards a cure. Doctors at the Fred Hutchinson Cancer Research Center in Seattle are investigating therapies that target mutations within cancer cells, while researchers at the Dana-Farber Cancer Institute in Boston are testing a technique to reactivate a protein in the body that naturally suppresses tumors.

Meanwhile, researchers at the University of Florida will use the Quantum money to study immunotherapies for deadly pediatric brain tumors.

"We're very optimistic that what this money is going to do is introduce us to new pathways, to new thinking on how to care for and treat children diagnosed with these very hard-to-fight cancers," said Brooks.

In the video below, Dr. Aplenc discusses his AML research and the honor of receiving Hyundai's "quantum" grant.