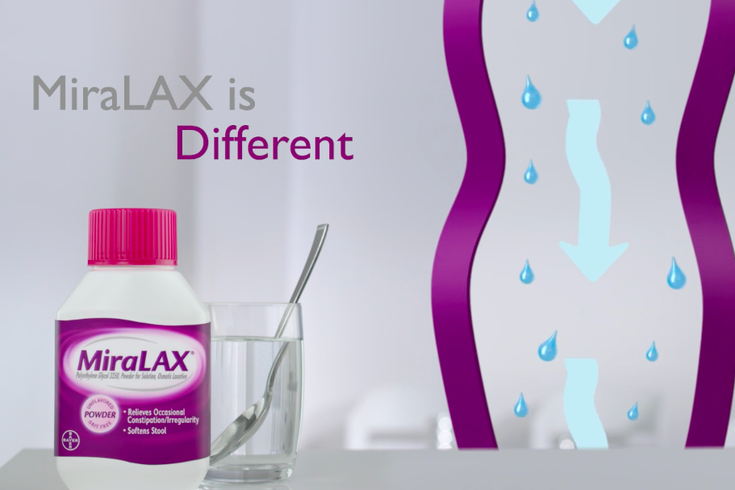 Screengrab from a MiraLAX advertisement.

For the past few years, the Children's Hospital of Philadelphia quietly has been conducting an FDA-grant funded study into parents' reports of devastating side effects from their kids' use of the over-the-counter constipation relief drug MiraLAX.

But until that study is completed, the hospital won't comment on the experiences of individual families.

Many of those experiences have been shared in the private Facebook group Parents Against MiraLAX (PEG 3350), where more than 3,500 people have joined to organize and voice concerns about a particularly worrisome ingredient in the laxative.

"We are a group of parents and family members who are highly suspicious of PEG 3350 and are here to discuss its cons," the group says under its page description. "We discuss alternative options and ways to talk to doctors about our opposition to this very dangerous drug. We are not a replacement for the type of health care you choose, we only speak from experience. You have to make your own choices and decisions based on your child and research."

When the FDA grant was awarded to CHOP in early 2014, the federal agency disclosed that MiraLAX powder contains small amounts of Polyethylene glycol 3350 (PEG 3350), which may under certain conditions degrade into ethylene glycol or diethylene glycol — toxic ingredients found in antifreeze.

"The Food and Drug Administration has received a number of reports of adverse events in children taking PEG products," the FDA said in its grant description. "The Agency has conducted a review that documented a number of reports of neurological and psychiatric events associated with chronic PEG use in children. A number of these pediatric patients received an adult dose of PEG (17 grams) for a duration ranging from a few days to a couple of years."

MiraLAX, manufactured by Bayer, is not recommended for patients under the age of 17, but the FDA concluded that it is often suggested to parents in clinical practice.

Several parents told 6ABC that their children experienced extreme neurological side effects that transformed otherwise happy children into anxious, paranoid and rageful people. Jeanie Ward, a parent who helped author a 2012 citizen petition to investigate the safety of PEG 3350 in children, said her daughter Nicole, now 19, took MiraLAX when she was 3 years old.

Within 10 days, Ward said her daughter became manic and aggressive, symptoms that never entirely subsided even after Nicole discontinued use.

The FDA has found 167 cases of adverse side effects in children who took MiraLAX, including 37 kids who displayed neurological or psychiatric symptoms. To date, however, they have not found sufficient data to conclude that PEG 3350 is linked to serious neuropsychiatric issues in children, according to a statement obtained by Action News.

The authors of the 2012 petition have called for a recall of laxatives using PEG 3350 and a black box warning against use of such drugs in children. They also seek an investigation into the long-term effects form the short-term use of PEG 3350 in pediatric patients, in particular.

Bayer, in a statement, referenced existing clinical studies confirming the safety of long- and short-term safety of PEG 3350 in pediatric patients, though the company acknowledged the product is not labeled for use in the pediatric population.

MiraLAX primarily is recommended for short-term use up to seven days to relieve constipation. Chronic use is not approved by the FDA, although many use it regularly or even daily to treat severe issues with digestion.

The North American Society for Pediatric Gastroenterology, Hepatology and Nutrition (NASPGHAN) says constipation affects about five percent of all children, for a variety of reasons, and can in many cases treated effectively with dietary and behavioral changes. Regarding PEG 3350, NASPGHAN has not found evidence to support serious side effects of MiraLAX in pediatric patients.

With greater media scrutiny of the product, however, NASPGHAN said the issue has caused a wave of concern among parents whose children are being treated for constipation with medications containing PEG 3350. In a response to the New York Times' coverage of MiraLAX in 2015, the group released a statement advising parents and encouraging long-term research.

Parents with questions about their child’s current treatment for constipation are encouraged to consult a pediatrician or pediatric gastroenterologist. The North American Society of Pediatric Gastroenterology, Hepatology and Nutrition and the American Academy of Pediatrics are committed to advancing the understanding of disease and the safety of treatment through data and research and welcome the study of prolonged use of PEG 3350.

A timeline for the completion of CHOP's study was not immediately known.