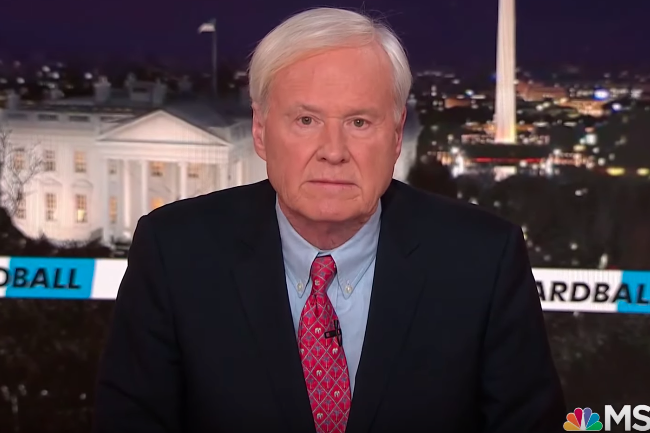 Chris Matthews abruptly stepped down from his show "Hardball" on Monday night following a series of controversial comments and sexual harassment allegations.

"Let me start with my headline tonight: I’m retiring," the Northeast Philly native said at the start of his show. "This is the last 'Hardball' on MSNBC and obviously this isn’t for lack of interest in politics. As you can tell I’ve loved every minute of my 20 years as host of ‘Hardball.'"

In a GQ article published Saturday, journalist Laura Bassett alleged that Matthews had harassed her prior to a 2016 appearance in which she discussed sexual assault allegations against Donald Trump. Bassett's allegation was the latest in a string of sexual harassment accusations made against Matthews.

Matthews allegedly asked Bassett, "Why haven't I fallen in love with you yet?" as she sat in a makeup chair. He also made other inappropriate comments regarding her appearance and asked whether she was "going out" later that night, Bassett claimed.

Several other women also told Bassett that Matthews had harassed them, according to the GQ article.

In light of these allegations, Matthews apologized for his behavior during his final segment.

“The younger generations are improving the workplace," he said. "We’re talking here about better standards than we grew up with — fair standards. A lot of it has to do with how we talk to each other, compliments on a woman’s appearance that some men — including me — might have once incorrectly thought were okay were never okay. Not then and certainly not today. And for making such comments in the past, I’m sorry.”

Matthews also came under fire last week for comparing Sen. Bernie Sanders' win in the Nevada primary to the Nazi invasion of France. He apologized following the backlash.

During a post-debate interview on Wednesday, Matthews grilled Sen. Elizabeth Warren for her support of a former employee who claimed former New York Mayor Mike Bloomberg insisted she have an abortion. Matthews asked her, "Why would he [Bloomberg] lie?" Warren responded, "Why shouldn't I believe her?"

Matthews also had been subjected to sexual harassment allegations in the past.

In 2017, a former assistant producer filed a lawsuit accusing the host of making inappropriate comments while she was employed in 1999.

He also made sexist comments about female politicians, Bassett noted in her article. Prior to an interview with Hillary Clinton in 2016, Matthews joked on camera, "Where's that Bill Cosby pill I brought with me?"

Matthews' departure was "mutually agreed" upon by both Matthews and MSNBC, a network spokesperson told MSN. A series of interim hosts are expected to fill his role until MSNBC finds a replacement.