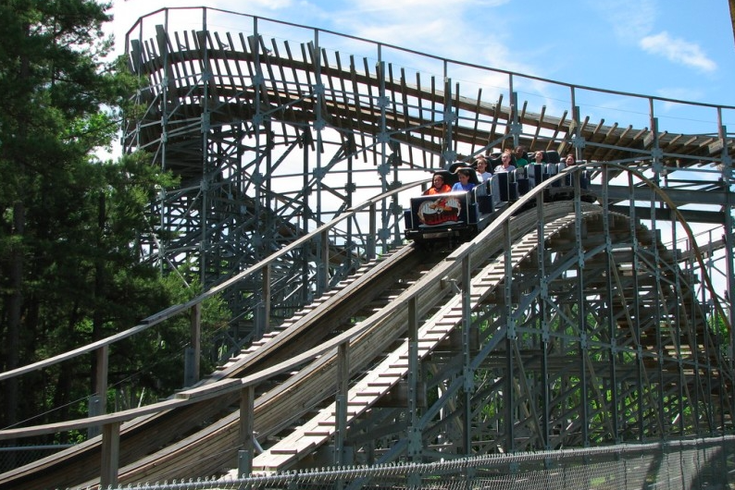 The Hellcat is one of several thrill rides at Clementon Park & Splash World in New Jersey. The 112-year-old park shut down early in 2019 and may be at the end of its run.

The 112-year-old Clementon Park & Splash World abruptly canceled its upcoming Fall Fest event and may be on the brink of closing down for good.

The 27-acre amusement park in Camden County had planned to hold its third annual Fall Fest on Oct. 18, but the event was canceled suddenly and the park closed for the season a week earlier than expected on Sept. 9.

Several other alarming signs point to a murky future for Clementon Park, which is one of the oldest continuously operating amusement parks in the United States. Its grounds feature thrill rides, family rides and a water park with several massive slides, among other attractions.

Amusement park industry news blog Screamscape reported several unusual tidbits about Clementon that don't appear to bode well for it. One anonymous source told the blog that the park's staff was told last week they were being let go:

Today I received a report from an anonymous source ... telling us that on Monday park owner Kieran Burke arrived on site and gathered all of the park’s year-round Full-Time staff and informed everyone that they were being let go, and final checks were handed out ... For all intents and purposes, Clementon Park appears to be NO MORE. But is it closed for good? Or perhaps we have to ask if the park in the middle of being sold to a new owner… or even a land developer?

While Clementon's website remains live, the park's social media accounts have been shut down, and the website isn't advertising for 2020 passes.

In a strange story published last week by 6ABC, a Philadelphia woman who purchased tickets to Clementon Park's "Appreciation Day" on Sept. 17 showed up to find that the place was empty. A security guard told her the park was closed for the season.

Finally, an independent organizer for the Clementon Fall Festival told South Jersey blog 42Freeway that she received information that the park's owners were seeking a buyer. Her company, Circle J Productions, regretfully announced the event's cancelation on Sunday and promised refunds to those who purchased tickets.

The amusement park was last sold in 2011 to Premier Parks, which later sold 12 of its 16 park properties in North America while remaining Clementon Park's operator. Clementon was one of the four not sold, but it's unclear why it wasn't included in that deal.

The park has yet to publicly address the various reports about its closure or provide any indication about its future. While signs point to a probable sale of the property, it would appear at the moment that Clementon Park's future is in serious jeopardy.