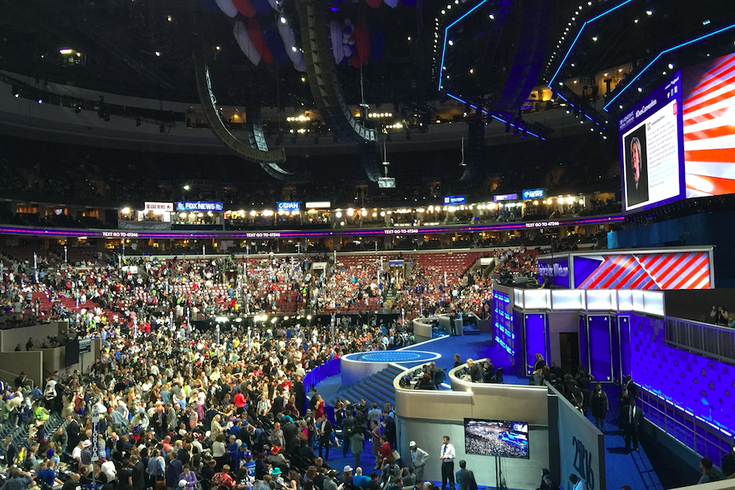 As delegates made their way into the Wells Fargo Center for the first day of the Democratic National Committee, Jake Sullivan – Hillary for America senior policy adviser – fielded questions from a half-dozen reporters inside a tiny media-tent room.

On the agenda for the first of four such regional press briefings was comparing and contrasting immigration policies and quotes from Clinton and her opponent, Republican presidential nominee Donald Trump.

PhillyVoice asked Sullivan to delve into the ongoing controversy over Philadelphia’s “sanctuary city” status, and whether Trump would rhetorically focus on it while the convention takes place here this week.

“The Trump campaign and the Republicans have tried to make an issue of sanctuary cities and I think this is another area where common sense should prevail,” he said. “If City Council and local law enforcement get together and decide that it doesn’t make sense for them to have local police, who have a heck of a lot to do, enforce federal immigration laws, then they should be allowed to do that. The Secretary has been very clear on that.

“At the same time, we believe that we need to continue to enforce the federal laws with federal officials and the key priority we have there is finding and dealing with violent criminals who pose a violent threat to the people of Philadelphia and across the country," Sullivan said. "It is at once possible to give local police the space not to have to do the federal government’s job for it and also be executing an enforcement strategy focused on the most dangerous criminals. Whether he’s going to bring it up this week or not, I’m not sure. I’m sure he’s going to want to distract from the ridiculous, disastrous elements of his immigration plan.”

In a bigger-picture sense, Sullivan maintained the difference between the two “could not be more stark” and laid out a summary of the “Stronger Together” policy agenda.

“Stronger Together means we need to pull together as a country to solve the big challenges we’re facing,” said Sullivan, a former top aide to Clinton at the State Department and Vice President Joe Biden’s former national security adviser. “Whether that’s immigration reform, criminal-justice reform, supporting the efforts of our law enforcement to rebuild the trust with communities and to be able to keep our streets safe, dealing with the consequential global challenge of climate change, which Donald Trump says is a Chinese hoax.”

He then chided Trump’s plan to build a wall along the Mexican border as one that “no credible voice” could stand behind. He then delved into claims that Trump would deport 11 or 12 million undocumented immigrants and contrasted it to calls for comprehensive immigration reform.

“Think about what that means: That means creating a ‘deportation force’ of thousands of thousands of people kicking down doors, rounding up families and deporting them,” Sullivan said. “The sheer magnitude of that proposal in terms of its human cost, and financial cost, not to mention the cost to our communities, economy and values is almost incalculable.

“When people look closely, they will find it completely at odds with common sense while Hillary Clinton’s proposal lies right in the heart of common sense.”