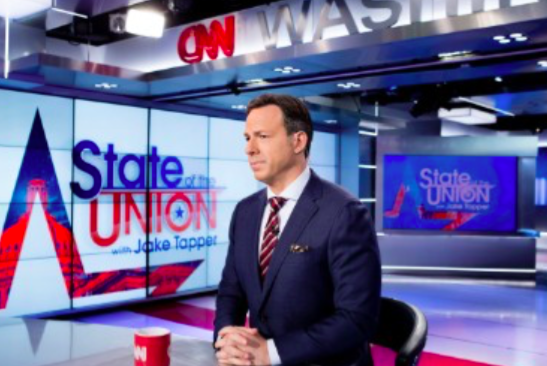 While many on the left see the alleged affair and cover-up as yet another example of the president's questionable character, Trump supporters claim Daniels' story lacks credibility and feeds into a media-driven sideshow.

The funny thing is @realDonaldTrump is still the President and she’s still a hooker. #StormyDanielsDay

Leave it to CNN anchor Jake Tapper, a Jewish Philadelphia native, to put Locke's remarks in perspective. In a series of tweets, Tapper cited the Gospel According to Luke to call Locke's moral reasoning into question.

37 A woman in that town who lived a sinful life learned that Jesus was eating at the Pharisee’s house, so she came there with an alabaster jar of perfume. As she stood behind him at his feet weeping, she began to wet his feet with her tears. https://t.co/k7GIY6NmVF

Then she wiped them with her hair, kissed them and poured perfume on them. When the Pharisee who had invited him saw this, he said to himself, “If this man were a prophet, he would know who is touching him and what kind of woman she is—that she is a sinner.”

40 Jesus answered him, “Simon, I have something to tell you.”

“Two people owed money to a certain moneylender. One owed him five hundred denarii, and the other fifty. Neither of them had the money to pay him back, so he forgave the debts of both.

Simon replied, “I suppose the one who had the bigger debt forgiven.”

“You have judged correctly,” Jesus said.

Then he turned toward the woman and said to Simon, “Do you see this woman? I came into your house.

46 “...You did not put oil on my head, but she has poured perfume on my feet. Therefore, I tell you, her many sins have been forgiven—as her great love has shown. But whoever has been forgiven little loves little.”

Then Jesus said to her, “Your sins are forgiven.”

49 The other guests began to say among themselves, “Who is this who even forgives sins?”

Jesus said to the woman, “Your faith has saved you; go in peace.”

Locke, taken aback, accused Tapper of calling him out merely because he disapproves of the president.

Great passage for sure. He changed her life by love and grace. She didn’t continue living in it and then get on national television to garner more attention for her nonsense. Context is key. The fact is, you hate my support of Trump w/out a Bible.

Tapper wasn't having it.

I have complete indifference to your feelings about any politician. But you might want to reconsider a refresher course. Hint: the passage is not “hey, go throw stones!”

This isn't the first time Tapper has questioned a religious right-wing figure's grasp on the intersection of American society and the Bible. Last December, after Republican Senate candidate Roy Moore was defeated in the state's special election, Tapper reminded Moore spokesman Ted Crockett that there is no Constitutional obligation to be sworn into office with a Bible.

Locke has also seen his incendiary comments backfire in the past. When he lashed out at Planned Parenthood last year after someone made a donation to the organization in his name, a GoFundMe page raised another $3,000 for the cause partly to spite him. He has also mocked the LGBTQ movement and defended U.S. businesses that don't want to serve gay customers.

Complicating matters for Locke this time around is a disturbing Pulpit and Pen interview with his estranged wife, Melissa Locke, who revealed abusive text messages and alluded to physical aggression on at least two occasions. Locke responded to the backlash in a Facebook post.

Tapper wasn't alone in his rebuke of Locke's tweet about Daniels. More than 13,000 comments snowballed from Sunday's "hooker" comment.

Shame on you so call Pastor Greg Locke, to throw dirt on her reputation while lifting up the President, you word should be let Christ heel our need of holiness at this time with POTUS and Mrs Stromy.

let’s all make sure not to confuse Christianity with the narrative white conservative men have decided to push in its place!

yo PASTOR Greg Locke, this sounds like something a disrespectful teenage boy would say for rts ??? https://t.co/oKQ6jXK22s

Let's be honest, he needs repent. This man does not represent Jesus. What a disgusting way to showcase your calling Greg Locke. https://t.co/SHPJhgz1Xt

at least now we know that Pastor Locke's misogyny doesn't stop with sex workers, but extends to his intimate relationships too! Way to be consistent, Greg! *knuckles* https://t.co/HBmYI8Yimv

The fact that he has not deleted this tweet tells you all you need to know about Greg Locke. https://t.co/NxF0aPJzQg