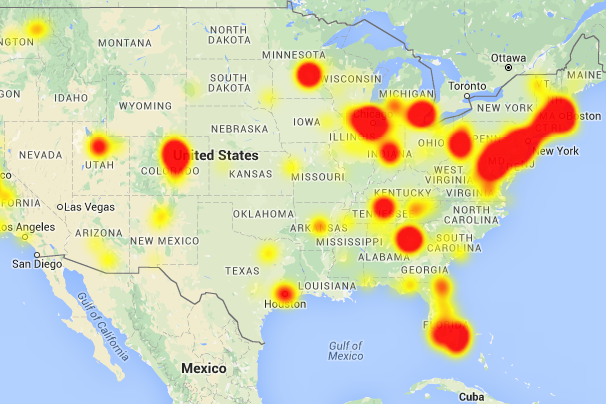 Comcast customers all along the Northeastern coast have reported service outages as shown in this screenshot from the website, DownDetector.com.

UPDATE: As of 1:22 p.m., Comcast says: "We have repaired the temporary network interruption that impacted some of our services this morning. Our engineers continue to work on this issue and almost all services have already been restored. We apologize for any inconvenience this has caused our customers."

Potentially millions of Comcast customers are dealing with video outages on Monday after a "temporary network interruption" impacted the cable provider in the morning, affecting several Comcast and Xfinity services.

According to the internet-site DownDetector.com – a site that documents users' issues with online service providers – problems started at about 6:30 a.m., but, customers flooded the site with complaints of service outages, including Internet, Cable or "total blackout," by 9 a.m., Monday.

In a map of where the outages are being reported, the site notes that thousands of users from "Chicago, Seattle, Denver, Houston, Portland, Philadelphia, Baltimore, New York, Minneapolis, and Washington" have reported problems.

While Bilotta shared a statement on Monday's outages, she said only video services were impacted by these outages.

"We’re continuing to investigate what appears to be a temporary network interruption that impacted some of our services this morning," read the statement shared by Bilotta. "Our engineers have been working on this and services are starting to be restored. We apologize for any inconvenience this has caused our customers.”