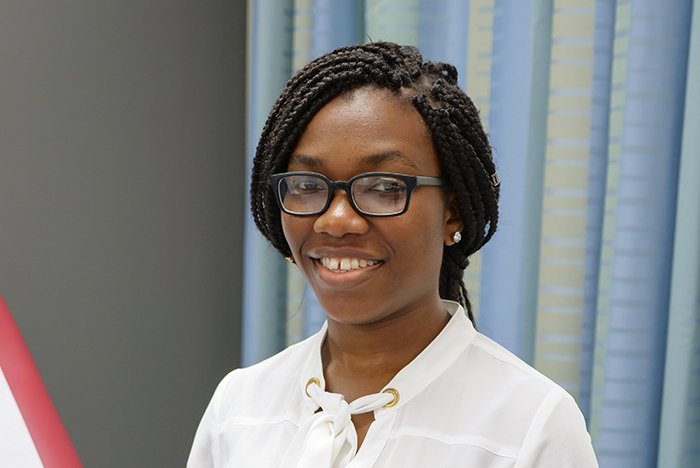 Elizabeth Okwamba is working on her doctorate at Rutgers School of Nursing-Camden.

When Elizabeth Okwamba was searching for a doctoral program in nursing, she had hoped to find a school that was close to where she worked with a faculty that personified the qualities that she wished to emulate in her own career. That’s why she chose Rutgers University-Camden, the same school from which she earned her undergraduate degree in 2014.

A native of Nigeria who moved to Camden in 2008, Okwamba received her associate’s degree from Camden County College before beginning her studies at Rutgers–Camden. After earning her undergraduate degree, she worked full-time for two-and-a-half years as an interventional cardiology nurse at the Deborah Heart and Lung Center in Browns Mills, New Jersey.

In 2017, she moved to the Jefferson Hospital for Neuroscience in Philadelphia, where she is now working part-time as a nurse in the same-day surgery unit while working on her doctorate at Rutgers School of Nursing-Camden. She is pursuing the track for family nurse practitioners, one of four tracks the doctor of nursing practice program offers.

“I want to be able to not be restricted to the patient population that I could care for,” said Okwamba. “As a family nurse practitioner, I will be able to care for both kids and adults.”

During her time as a student, Okwamba has participated in various civic engagement efforts. During her final undergraduate semester, she took a course in Guatemala called “Health and Healing,” which provided her with the opportunity to educate Mayan women on health issues and also build stoves that alleviated smoke exposure common to outdoor cooking methods.

When asked about her studies abroad, she responded “We learned a lot. But behind it, the soul was there. We made a difference.”

As a graduate student, she’s volunteered in the Rutgers-Camden faculty practice clinic at Cathedral Kitchen, a mission in Camden that serves food to the homeless. The clinic offers free nurse practitioner services to those without medical care.

These experiences ended up playing an instrumental role in determining the career Okwamba would ultimately pursue. When enrolling as an undergraduate in nursing school, she originally planned on going to medical school to become a doctor. But her civic engagement experiences caused her to realize that she could make just as big of an impact as a nurse.

“It’s not the title of your job, it’s about what you are doing,” she said. “And being a nurse, that’s what I was doing – being there and helping people. I realized this is what I want to do.”