Officials in Chester, Berks, and Montgomery counties have joined to create the Schuylkill River Passenger Rail Authority, and Amtrak has committed to the plan, too 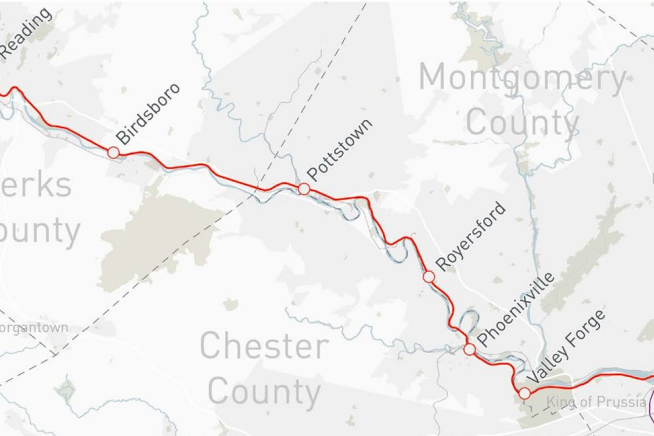 Chester County became the last of three counties to approve the creation of the Schuylkill River Passenger Rail Authority, a nine-person committee that will oversee the restoration of passenger rail service between Philadelphia and Reading.

Leaders in Chester County recently joined those in Berks and Montgomery counties to establish a transportation authority that will oversee plans to restore a defunct passenger train line in the suburbs that once connected Philadelphia and Reading.

It will be called the Schuylkill River Passenger Rail Authority. It's creation does not guarantee that the project will happen, but the boards of commissioners in each county are hopeful that the creation of the rail authority, combined with federal funding through the Infrastructure Investment and Jobs Act, will make the passenger line a reality.

There has not been passenger rail service between Reading and Philadelphia since 1981. Though that train line had served residents since the mid-1800s, a combination of financial struggles amid SEPTA's plan to electrify its rail service resulted in the transportation authority stopping its Regional Rail line at Norristown, Montgomery County.

Previous efforts to restore the service have been popular, but none have progressed as far as the current attempt with the creation of the SRPRA, which has nine members from Berks, Montgomery, and Chester counties. These include commissioners representing all three counties, members of the planning commissions in Chester and Montgomery counties, Phoenixville Mayor Peter Urscheler, Reading Mayor Eddie Moran and some others.

"In this polarized world right now, I think it's great that not only three counties work together, which is very rare, but that it is a nonpartisan issue — Christian Leinbach (Berks County Commissioner) is a Republican, Ken (Lawrence, Montgomery County Commissioner) and I are Democrats, but we are working hard to get this done," Marian Moskowitz, Chester County Commissioner, told WHYY.

The restoration of the Philadelphia-Reading rail line is the product of a 2020 PennDOT analysis. The plan calls for trains to provide the service from Center City to Reading, with stops in Phoenixville and Pottstown along the way.. Other potential stops include Norristown, Port Kennedy, Royersford, Birdsboro, and Wyomissing.

The trains would use SEPTA Regional Rail lines from Center City to Norristown, and then Norfolk Southern freight lines from Norristown to Reading.

"Since the last train rolled through our beautiful Columbia Station in the 1980s, probably the next day a group formed in Phoenixville to work on the restoration of rail service," Urscheler said, adding that he has heard support in Phoenixville from the school district to commuters who are looking to avoid the frequent traffic on Route 422, which passes through Berks, Chester, and Montgomery counties.

#Chesco Commissioners have joined their counterparts in @berks_pa and @MontcoPA in creating the Schuylkill River Passenger Rail Authority. @marianforchesco, who will serve on the Authority, speaks about this joint effort. pic.twitter.com/j1PsrBijyW

Brian O'Leary, who is on the new rail authority board and is a Chester County Planning Commission, gave a presentation before Chester County commissioners agreed to join the SRPRA last week. He said Amtrak is looking to start the project with bus service to Pottstown and Reading later this year.

O'Leary pointed to the benefits of expanding passenger rail service, including easing vehicular traffic, meeting needs of households without cars, connecting the suburbs to Philly with a direct line, and improving property values of homes located near train stations.

By creating a passenger rail service to communities like Pottstown, Reading, and Phoenixville, the Chester County leaders said that these areas could generate new home construction and increase property increases. It could also expand opportunities to low-income communities and communities of color that are often underserved by public transit options in these areas.

A PennDOT analysis estimates between 2,266 and 6,424 people would ride the new train line daily.

The plan is for Amtrak trains to run on the new line, beginning with three trains per day and adding more depending on demand. Amtrak has agreed to cover the costs of creating the new line using money from federal Infrastructure Act.

To start, there also will be a $100,000 investment from all three counties involved. The the SRPRA will have the authority to formalize agreements, pursue additional funding, and partner with transportation operators and agencies, according to the Chester County Board of Commissioners.