Berks, Chester, and Montgomery commissioners will hold public hearings next month on the formation of a joint rail authority 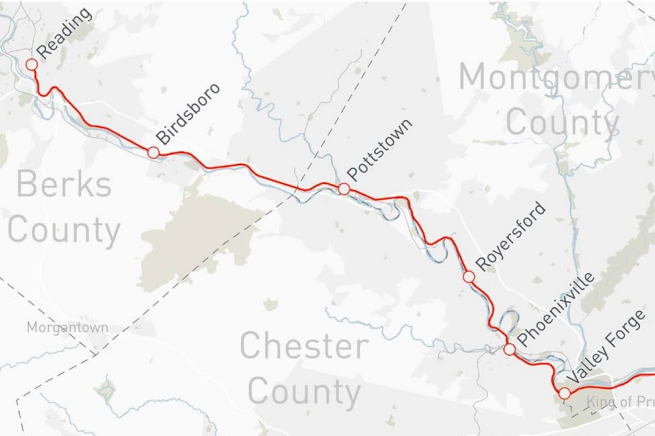 Politicians in Berks, Chester and Montgomery counties hope to put in place a new commuter rail service between Reading and Philadelphia.

Commissioners in three suburban counties are hoping to restore passenger rail service between Reading and Philadelphia, following along the Schuylkill River.

Leaders in Berks, Chester and Montgomery counties each will hold public hearings in April regarding the formation of a joint Schuylkill River Passenger Rail Authority, the Reading Eagle reported.

A preliminary plan for the rail service was pitched to the Berks County Board of Commissioners on Thursday. The project would include stops in Birdsboro, Pottstown, Royersford, Phoenixville, Valley Forge and Norristown.

If the new rail authority is created – a move that requires the approval of all three counties – it would be eligible for federal funds and would work directly with agencies like Amtrak and PennDOT to develop the rail service, the Pottstown Mercury reported.

The authority would be run by a nine-person panel with three appointees from each county.

Some leaders, including Berks County Commissioner Christian Leinbach, think now is the best time to act due to President Biden signing the $1.2 trillion Infrastructure Investment and Jobs Act into law in November. The legislation includes $66 billion in funding for passenger and freight rail.

Amtrak released plans last year for a new line on existing tracks which would have three daily trains between Reading and Philly with four stops. The entire trip would take about 90 minutes.

Officials believe the renewed service could lead to as much as $1 billion in real estate investments and create thousands of jobs, the Mercury reports.

Passenger rail between Philly and Reading existed as far back as the mid-1800s. For decades, the latter was the center of the Reading Railroad, a sprawling web of freight and passenger lines across Southeast Pennsylvania which was once a linchpin of the regional economy. But the company went out of business in 1976 and its holdings were turned over to Conrail.

It was just five years later – shortly before 8 a.m. on Tuesday, June 30, 1981 – that the last passenger train pulled into the Franklin Street Station. The site sat empty until it was refurbished in 2013 and eventually became a bus station for the Berks Area Rapid Transit Authority.

The main Reading Station remains downtown on Chestnut Street as a national historic landmark. There was also a third station in nearby Muhlenberg called Reading Outer Station, which burned down in 1978.

Occasionally, a train will depart from the former site of the Outer Station with service to Jim Thorpe, but the line is advertised by the Reading Blue Mountain & Northern Railroad Passenger Department as more of a tourist attraction than a reliable service for commuters.

Although there's no longer any standard passenger rail service in Reading, Amtrak's Keystone line to Harrisburg does make stops in several Chester County towns including Coatesville, Exton and Malvern. SEPTA also has rail service that gets as far as Norristown, which is about an hour's drive from Reading.