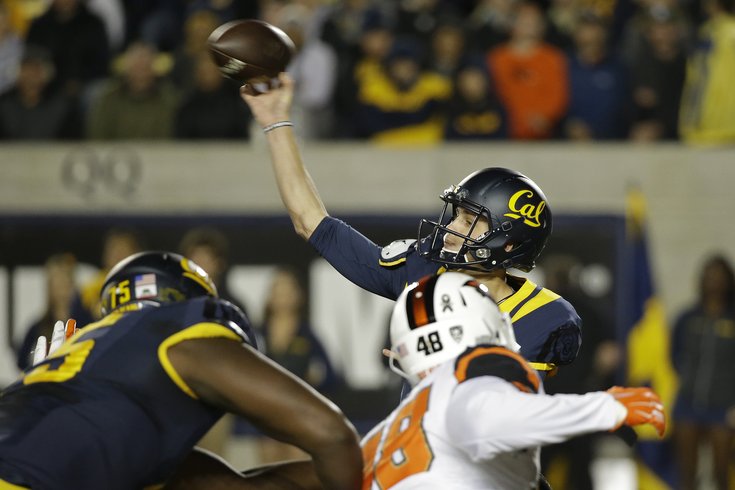 As the offseason drags along and we all wonder what is to become of Sam Bradford's future with the Eagles, the obvious question if Howie Roseman and the gang decide to part ways will be, "Who's gonna replace him?"

If the Eagles were to move on from Bradford, they would instantly become prime candidates to draft a quarterback in the first round. And even if they kept Bradford, it might not be the worst idea anyway.

The consensus top three quarterbacks in the 2016 NFL Draft are North Dakota State's Carson Wentz, Memphis' Paxton Lynch, and Cal's Jared Goff. We'll compare those three quarterbacks trait-by-trait over the next couple weeks. Last Friday, we took a look at the arm strength of Lynch, Goff, and Wentz. Today we'll watch their releases.

In the NFL, passing windows disappear quickly, and pass rushers close in on quarterbacks in a flash. That's why having a quick release at the professional level is so important.

In training camp last year, we got to see one of the reasons Tim Tebow failed in the NFL -- because once he made the decision to throw, you could time his release with a sundial. Conversely, hate him if you will, but Tony Romo's release is special. Watch this:

Romo's release is the best aspect of his game. He doesn't have a strong arm by NFL starter standards, but that deficiency is offset by his ability to get the ball out extraordinarily quickly once he makes up his mind to throw.

Of Wentz, Lynch and Goff, you would expect Lynch to be the most challenged in that department of the three, as he is listed at 6'7. Surprisingly, Lynch's release really isn't as slow as you might expect. In my opinion, the ball actually comes out relatively quickly. However, as you can see below, he does have a little bit of a windup. Where that becomes an issue is when you have safeties peering into the backfield. Lynch's motion could tip off savvy defenders when the ball is coming out.

If that sounds nit-picky, well, it is. At 6'7, Lynch's release is reasonably good.

The other quarterback facing similar obstacles in regard to a quick release, being taller than most, is Carson Wentz. However, Wentz's release is outstanding. He has a nice, tight motion, and the ball comes out with plenty of velocity when needed, or with touch.

And finally, there's Goff, who probably has the quickest release of the three. I chose the play below because Goff has to escape pressure, relocate his receiver, and then snap off a quick throw. This is really good:

Goff's and Wentz's releases are both very good, with Lynch a little behind them. Here's how we'd rank them so far:

*We cut the above videos cut from DraftBreakdown.com.