The Eagles have a pretty good chance of making the playoffs. Just look at these projections... 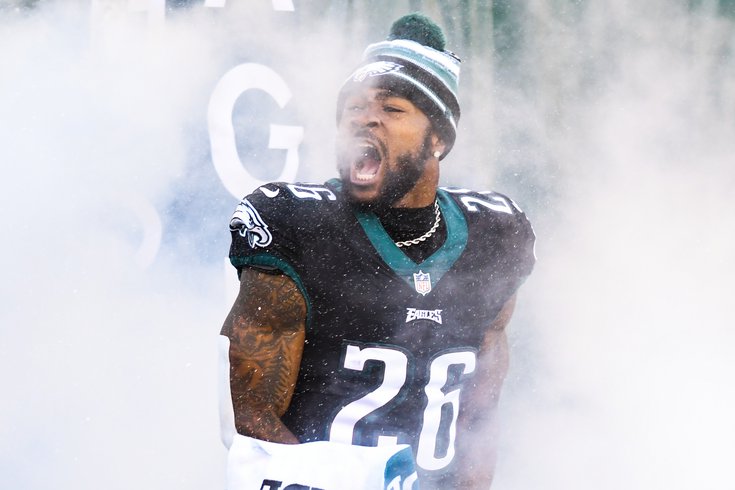 Miles Sanders is fired up about the Eagles playoff chances.

If you predicted the Eagles and their fans would be looking at favorable playoff odds come Week 17 before the season started, congratulations — your endearing optimism has paid off as Philly holds its own playoff destiny right now.

The final two NFC spots are up for grabs with a handful of teams still actively vying for them. The Eagles can make the playoffs by winning against Washington on Sunday and Dallas in two weeks. They also can make it by getting some help and winning just once.

There are technically six teams alive hunting for the final two NFC playoff spots. But the final three teams would need a heck of a lot of help. The Cardinals already clinched a spot, though the seeding from 5-through-7 is totally up for grabs.

We found quite a few different statistical analyses that give the Birds differing playoff odds. We've included them below with a little analysis and color. Take a look:

ESPN's power index projects the Eagles have a pretty good chance of making the playoffs with a 9-8 record.

The football outsiders are high on the Eagles playoff chances, but give them just a 5% chance of making the conference championship.

PlayoffStatus.com says the Eagles have a 62% chance of making the dance, and a 14% chance of winning a playoff game.

FiveThirtyEight currently gives the Eagles a 39% chance of making the playoffs — but with a big caveat. If the Eagles win against Washington, their playoff odds leap to 90%. These odds vary with the results of San Francisco and New Orleans, each of whom have games that impact the Eagles in Week 17. There are obviously a lot of different possible outcomes, but 39% comes in at the lower end of the spectrum, showing just how important it is for the Eagles to take care of the business in front of them.

Slightly better than FiveThirtyEight's odds, The Athletic broke down the Eagles' clinching scenario as follows:

Maybe the most surprising clinching scenario in the current NFL playoff races is that the Philadelphia Eagles, somehow, can clinch a playoff spot this week. An easy schedule in the second half of the season has put the Eagles squarely in the playoff race and can clinch with this scenario: Eagles win AND Vikings lose AND 49ers lose AND Saints lose (Week 17). [The Athletic]

According to the Times, which has its own statistical model that projects playoff potential, the Eagles raised their playoff chances from 32% to 61% after beating the Giants last week (and getting help from some key teams also losing). Not bad.

Steve Kornacki has become an NBC Sports analyst and uses his big board for the playoffs like he does for elections. He projects the Eagles have a better than 50% chance right now, and if all three teams vying for the last two spots — Philly, San Fran and New Orleans – all win out, the Niners will be the team left out.

Sportsbooks seem to have more faith in the Eagles than computer calculations, and this one comes from Maxim Bet. They are offering a negative line on the Eagles to make the playoffs (you'd need to bet $250 to make $100), and expect the Eagles have greater than a 70% chance of clinching a postseason berth over the next two weeks.

BetMGM has more favorable betting odds, so hop on this now. The Eagles have a +175 chance to make the playoffs. For what it's worth, their main competition, the Saints are +300 and the Vikings are +250. We should mention that the Saints face the Panthers and Falcons, while Minnesota faces the Packers and the Bears.