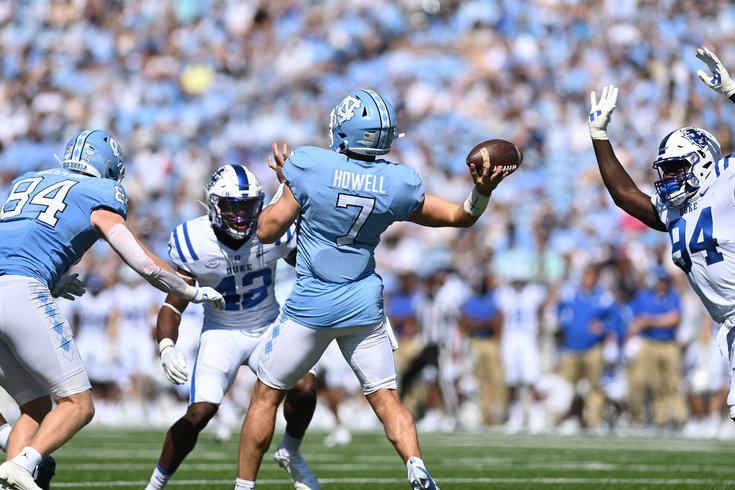 Here we'll cover the next three days of bowl games, from Tuesday to Thursday.

Houston has had four defensive players get drafted in the first round since 2013, including DE Payton Turner (28th overall to the Saints in 2021) and DT Ed Oliver (9th overall to the Bills in 2019).

Hall is probably a little too raw and lacking ideal production to go Round 1, but he's a likely Day 2 guy with intriguing size, power, quickness, and inside-outside versatility.

Mentioned him a while back but #GoCoogs DL Logan Hall is powerful and relentless at the POA.

He had a standout performance last night in the win vs. Tulsa. He possesses great positional versatility, playing both inside as a DT and out on the edge. pic.twitter.com/onRLW6k6v7

If the Eagles miss out on the first wave of defensive linemen in Round 1 because of their recently weakened draft positioning, Hall is a player who would make some sense in Rounds 2 or 3, but it might take him a year or two to become a productive pro.

(Hall won't actually play in this game, as he opted out to prepare for the draft.)

Mafe is probably a Day 3 guy who had a good-not-great career at Minnesota, but who has physical gifts. He came in at No. 17 on Brice Feldman's "freaks" list this past offseason.

It will be interesting to see how Mafe performs both at the Senior Bowl and the Combine. The Eagles tend to take guys with impressive athleticism in the middle rounds.

In 2021, Hall had 30 receptions for 320 yards and 4 TDs. He has a career yards per catch average of 11.3 and 12 career receiving TDs. As you can see in the following highlight reel, he has some legitimate receiving chops, as in, down the field, and not just as a dump-down guy.

And, of course, coming from Oklahoma, he shared a backfield with Jalen Hurts.

The Eagles don't currently carry a fullback on their roster, nor have they in some time, but if they commit to a run-heavy offense in 2022 and beyond, maybe a fullback who can double as a tight end would make some sense?

Back in November, Howie Roseman made a rare visit to a college game when he saw Pittsburgh take on North Carolina. Most assumed that Roseman was there to see Pitt quarterback Kenny Pickett, which is probably true, but he no doubt was also watching UNC's Sam Howell.

Some had Howell as the No. 1 quarterback prospect in the 2022 NFL Draft before the start of the 2021 college season, but his production dropped off after the Tar Heels lost four skill players — running backs Javonte Williams and Michael Carter, as well as wide receivers Dyami Brown and Dazz Newsome — to the NFL.

Still, Howell's body of work at UNC is impressive, especially for a player who started as a true freshman. Without his 2020 weapons around him, it should be noted that Howell became more of a runner in 2021, rushing 170 times for 825 yards and 11 TDs, when he only had 181 rushing yards in his previous two seasons combined.

Some highlights from Howell's 2020 season:

It is still to be determined if the Eagles will roll with Jalen Hurts in 2022, and at some point during the offseason we'll take a closer look at all the major quarterback prospects in the 2022 NFL Draft, but in the games I have seen Howell play, I agree with Daniel Jeremiah's comp to Baker Mayfield.

Taylor is a physical corner with some ball skills, and a fun player to watch. I love the play below at the 1:13 mark, where he smashes the receiver trying to block him, and then makes the tackle for loss.