Week 17 NFL odds: Point spread, total and advice for every game, including Eagles vs. Washington

Here's a look at every game, and how you should bet them... 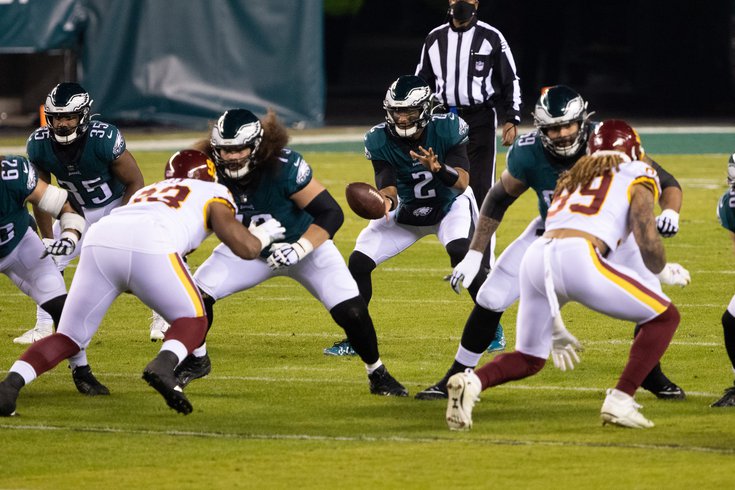 We say goodbye to Thursday Night Football and Saturday action as we hit the final two weeks of the season. The playoffs are still alive for the majority of teams, and we still have a couple of divisions up for grabs. COVID is no stranger to the league and can still impact games right down to the day of kickoff, so pay attention as things progress throughout the week.

We also see a return to more of a balanced Sunday schedule with nine early games – including the Eagles and WFT – followed by five later games. Sunday Night Football is in Green Bay as the Packers have already wrapped up the NFC North. Monday night features the bottom two teams in the AFC South as Pittsburgh hosts Cleveland.

The slate has four double-digit spreads with three making sense based on who is playing. The Jags, Jets, and Texans are all getting more than 10 points. The Falcons are the fourth team taking on the Bills in Buffalo. Atlanta getting 14.5 points may be the biggest surprise on the schedule. Let’s dive into each game, starting with the Birds in DC. All the lines and totals below are courtesy of sidelines.io.

The Eagles are red hot, one of the brightest teams in the NFL heading into the final two games. They are running over everyone and able to overcome rough starts against bad teams. WFT has lost three straight and got run out of the building by the Cowboys last week. Washington is a miserable 5-9-1 ATS and cannot be trusted to actively try and win this game. Even their head coach Ron Rivera set up a QB switch ahead of Sunday. The Eagles are playing a team that wants to lose, lay the 3.5 up to 6.

The first thing that jumps out at me is the total just under a key number 51, and how much I want to smash the under. Spags has his guys playing defense out in KC and the Bengals come off a huge offensive performance. Everything in this game screams lower-scoring, ball control offenses. The Chiefs offense isn’t what it used to be – at least this year – but their defense is enough to ground the Bengals air game. Both teams are .500 to the O/U which speaks volumes to how often they have offensive duds. I lean Bengals at home with the points but LOVE the Under 50.

Another total that jumps out first, mainly because the Jets defense is so horrible. They give up points no matter which offense they face, and even a depleted Bucs team should be able to light it up. Tampa Bay is watching Antonio Brown and Rob Gronkowski pick up slack for Chris Godwin and Mike Evans being out – Evans with COVID and Godwin due to injury. It won’t matter. The Bucs are on the road so there’s an easy letdown factor. The Jets are getting seven points in the first half and may be the best play on the board. Once they cover, pound the Bucs live.

The Rams are in the driver’s seat in the NFC West – thanks in part to the Cards melting down. They have a lot to play for from a seeding standpoint but I’m more worried about their glaring inability to cover spreads. So much of this game depends on the health of Lamar Jackson, but even if he’s out there at 75 or 80% he can make a major difference. The key stat here is the Rams are an amazing 11-4 but only 8-7 ATS. Problem, right? Not so much. As we look deeper, we see the Rams have covered four straight games, including a 14-point cover against the Jags. The Ravens are also 8-7 ATS so nothing to be too concerned about, especially with a backup QB.

Buffalo comes off its biggest win of the season without question. The Falcons beat the Lions but are still just one game below .500 after a shaky start. We normally don’t see gigantic lines like this so deep into the season unless one team is the Jets/Jags/Texans or someone (QB) is hurt. Atlanta isn’t even beaten down by COVID now, so for them to be getting more than two TDs on the road seems off. The Falcons are just 5-9-1 ATS but the Bills are 3-3 ATS over their last six games. Neither team is dominating the spread and Atlanta is not a bottom-feeder, I’ll comfortably take the Falcons and the points.

Forget everything you just read about the Bills when looking at this Pats line. It may not be enough. While the Jags have found a new perspective on life without their former HC, they are still the Jags. This game comes at the best possible time for the Patriots after they dropped two straight down the stretch. If anyone would be able to bounce back against absolute slop, it’s this year’s Pats team against the Jaguars. The Pats dropped two straight and are still a healthy 9-6 ATS, meanwhile the Jags are 4-10 ATS and are chopped meat. If the spread is too much to jump on, try the under 41.5. You are still just above the key number of 41, and the easiest path to victory for New England is shutting out the Jags.

The Raiders are over. It was a cool story to start the season but then it got real ugly real fast. The off-field incidents were horrific and ugly, and the play on the field disintegrated. They looked like a team that succumbed to pressure far more often and take on one of the best teams in the NFL right now. Lay the points with the Colts. Indy is on fire, winning six of seven with the loss coming to the Bucs. It doesn’t matter how they win, in the air or on the ground, Indy is a tough out right now. The Colts are 9-6 SU but 10-5 ATS, even when they lose, they cover. Good thing you won’t have to worry about that on Sunday.

Don’t overthink this one, it’s exactly what you saw last week. The Giants are so awful at playing football they won’t be able to take advantage of any gift. The Bears are miserable but not as bad as the rest of the bottom teams, and our old friend Nick Foles should have his way with Big Blue. Seriously, what are the Giants even doing? The Under is a combined 18-11-1 for these teams, so the 38-point total shouldn’t scare you away from going under. The problem with the total is not knowing how bad either defense can be, which would give both offenses a needed boost. New York is 6-9 ATS while the Bears are 5-10. This is a good reminder that you don’t have to bet every single game. With that said, I’ll reluctantly take the Bears laying anything under 7.

Miami has now won seven straight games and is on fire – doing whatever it takes to grind out victories. The Titans are still atop the AFC South and need to keep the Colts off their heels. COVID may play a bigger role in this game as the Titans defense got hit with a couple of cases; already down Julio Jones. The Dolphins are looking to be the first team in NFL history to start 1-7 and make the playoffs, tough to bet against that.

Denver just can’t beat anyone in the AFC and the Chargers desperately need to bounce back from a loss to the Texans. Pretty simple scenario that should play out in the Chargers favor, especially as they are at home. The Broncos are just 1-7 in their last eight games vs the AFC, and should continue to struggle against a better team in the division. Throw the numbers out with the Chargers this week, as they have a major swing coming back after that brutal loss to Houston.

Houston comes off a gigantic win as they were down multiple guys due to COVID and knocked off the Chargers. San Francisco returns this week after a tight loss to the Titans. The Niners are still in the hunt for the final wild card spot and should slam the Texans into the ground. Houston got LA on a down week – also due to COVID – and has a nice letdown coming against an angry Niners team.

Everything here would indicate the Cardinals would win, rather big against Dallas. Arizona is reeling and could use a stopgap in the losses. The Cowboys would come down to earth following their obliteration of Washington this past Sunday. Arizona plays significantly better on the road than at home, as they are 7-1 ATS as the road team this year, and just 2-5 ATS at home. Take Arizona with the points, especially anything over 4.5.

Buyer beware if you are taking anything with Seattle here. They come off a bad loss for normal teams, but there’s nothing normal about the Seahawks this year – especially with Russell Wilson. If you want extra ammo to fade Seattle just look at the line. It’s still a reflection of the Lions actual record (2-12-1) versus their record ATS (10-5). The under is also a sharp play here as the U is a combined 21-9 for both teams. Take the points with Detroit, as they are cover machines, and expect a lower scoring game.

The Vikings would be the play here except Green Bay still has a couple of things to do before the playoffs. Seeding is still in play for the Packers, as is the MVP for Aaron Rodgers. No matter what you think about his future in Green Bay, he’s set on winning the MVP and Super Bowl this year. The Pack have won 13 of their last 14 games at home, making it increasingly difficult for the Vikings to stay in the playoff hunt. Minnesota is only 8-7 ATS, but they have covered 7 of 8 games as an underdog following a loss. Take the Vikings getting the points.

These are two teams just wasting our time as the regular season winds down. The Browns were always a fraud on offense, it just needed to be exposed to the public. Meanwhile, the Steelers have one of the worst offensive lines combined with the least creative game scripts in the NFL. Pittsburgh may be down 20 and will still hand the ball off to Najee Harris, instead of throwing it to him. Best to take the under here as Pittsburgh’s offense is miserable, and Cleveland’s “Boy Genius” might want to try basketball like his daddy.