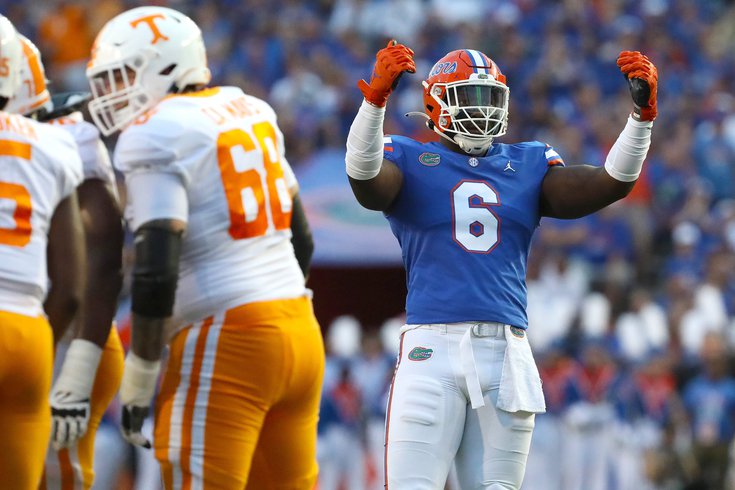 Florida DE/DT Zachary Carter would be an interesting fit in Jonathan Gannon's defense.

We were originally going to publish this post on Tuesday, but figured it would just get lost amid all the Eagles game day coverage, so we rescheduled it for Thursday. As such, Muma already played his bowl game. Whatever.

He has instincts, speed, and some pop:

A couple years ago, former Wyoming linebacker Logan Wilson was a popular name to pop up in Eagles mock drafts, but he was selected 65th overall by the Bengals. In his second season in Cincinnati in 2021, Wilson has 92 tackles, 4 INTs, a forced fumble, and a sack.

Muma could be another Day 2 guy in Wilson's footsteps, and the Eagles still have a pretty obvious need at linebacker.

As such, Robinson is a player I'm interested in taking a close look at in January at the Senior Bowl to see how he fares against top-level talent.

For now, he's not even a starter (4.5 sacks in 11 games this season), but as a situational pass rusher he brings unique athleticism to the table, and he's very likely to test well at the NFL Combine.

I could see Howie Roseman taking a late-round swing on a sleeper like this, and giving him a few years to develop either as an edge rusher, or as a SAM linebacker in Jonathan Gannon's scheme.

Carter is an inside-outside versatile defensive lineman with 17 sacks over his last three seasons at Florida, with 7.5 in 2021 playing DE in their 3-4 defense. He played both on the interior, and at times outside of the OT.

Carter has good size, and he's primarily a power rusher.

But for a big man, he can also move.

Zachary Carter chases down Jahleel Billingsley in the backfield. TFL for the lineman. pic.twitter.com/IXV2kgTPA8

We saw the struggles the Eagles experienced when Brandon Graham went down this season. Carter is a player who can fill in to that role along with Milton Williams as Williams continues to adapt to the NFL game. I think Carter is a slept-on player who could go early Day 2.

Memphis has a recent history of putting explosive offensive playmakers into the NFL, from Tony Pollard, to Antonio Gibson, to Kenny Gainwell. Austin is a waterbug type, who has put up big numbers the last two seasons. In 2020, he had 63 catches for 1053 yards and 11 TDs. So far in 2021, he has 74 catches for 1149 yards and 8 TDs.

He has also been a weapon as a returner for Memphis, with punt return TDs in each of the last two seasons.

Austin could be a more threatening player in the Greg Ward role.

Johnson displayed some versatility in college playing both LT and LG. With a lack of length, he'll almost certainly be a guard at the next level.

Brandon Brooks is a candidate for retirement this offseason, while Isaac Seumalo and Jack Driscoll have both racked up their share of missed time as well. Landon Dickerson will likely start at one interior line spot, but the Eagles could use some more reinforcements. Early Day 3 guy, in my opinion.