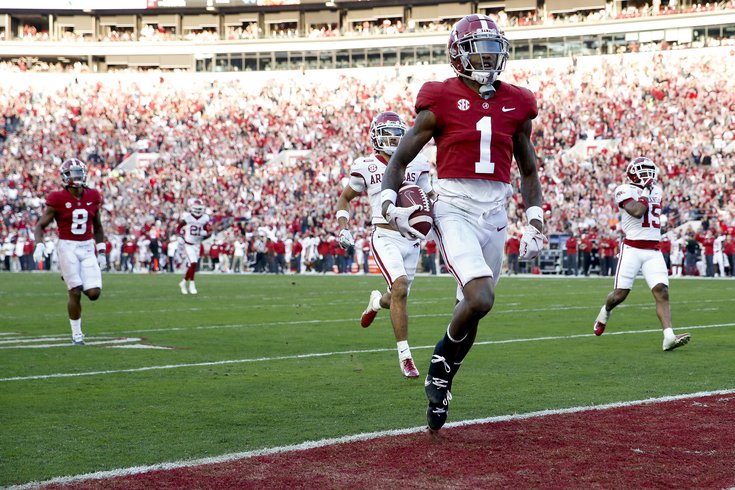 Oh hey another really good Bama receiver. This one is a deep threat who has 61 catches for 1261 yards (20.7 YPC) and 13 TDs this season. Behold the jets on this dude:

The Eagles have two "speed receivers," but are they really the deep threats that the Eagles hope they are? Jalen Reagor has been a complete zero in that department, and Quez Watkins is a player worth continued development, but is he a starter?

A deep threat like Williams could give DeVonta Smith extra room to operate in the intermediate parts of the field.

Walker's stats won't wow anyone in a Georgia defense that is loaded with future NFL players. He has 4 sacks and a couple of batted passes in 9 games this season. However, he's going to be picked high because of his physical size and athletic traits.

If you search his videos on Twitter, you'll find a lot of fun stuff, but my favorites were this:

On a rainy day - watch special teams of programs like UGA/Bama/OSU. Impressive youth/athleticism combos all over the place.@dpbrugler 9th overall prospect in his recent Top 50 Big Board pic.twitter.com/EAjPc4JD7P

One game into Travon Walker and I have seen him on the edge, at 3T, 1T... then this. pic.twitter.com/MYdDIKhKMB

Good Lord. I think his fit would be in the Brandon Graham role in the Eagles' defense, but with versatility to do other things as well.

The Eagles have been stockpiling cornerbacks, and they currently have nine on the roster. They also signed Avonte Maddox to a three-year contract extension. For those reasons, a smaller corner may not make much sense. However, the Eagles have a pretty big need for a returner, and Jones is the premier return man in college football. There's maybe also an argument that you can never have too many corners, especially when they can make plays the way this guy can.

MORE: Final Eagles-Jets injury report, with analysis | Week 13 NFL picks: Rounding up the experts' predictions for Eagles vs. Jets | Mailbag: How much could Russell Wilson cost in an Eagles-Seahawks trade?

Ridder is a dual-threat quarterback prospect with good size and a strong arm who has led Cincinnati to a (so far) undefeated 2021 season, after leading them to a 9-1 record in 2020. He has done a lot of winning in college, as he is a four-year starter with an impressive 41-5 overall record, and a career 84 passing TDs vs. 28 INTs. If there's a knock on him, it's inconsistent accuracy.

As you can see, the Bearcats like to run a healthy number of RPOs, just like the Eagles. In that sense, he's an easy fit into the Eagles' offense. Ridder is a better passer prospect than Hurts was when he came out, in my opinion, but Hurts is a better runner.

I like Ridder's chances of going late in Round 1. If you're the Eagles, obviously you'd have to decide how much more Ridder gives you than Hurts as a passer, and whether that's worth one of your first-round picks.

Ridder is probably not a clear enough upgrade to spend that kind of resource on him, but at a minimum, he's a player worth monitoring during the college bowl season, and if he participates in the postseason events like the Senior Bowl.

Does he also own a Mummers hat? Honestly, there might not be a better college-professional comp in this draft than Linderbaum to Jason Kelce.

The Eagles can go in a number of different directions along their offensive line. Both Landon Dickerson and Isaac Seumalo have center versatility in their profiles, but if the Eagles wanted to find an heir apparent to Jason Kelce and just leave Dickerson and Seumalo at the guard spots, Linderbaum could provide an easy transition, should Kelce retire.