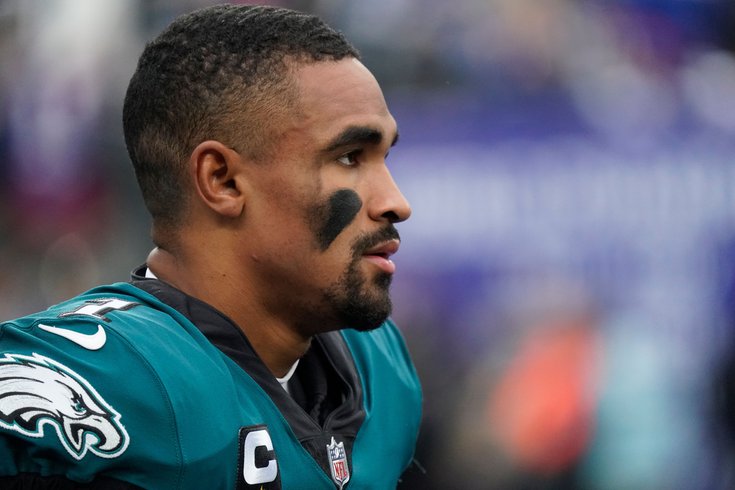 Jalen Hurts said that he will play on Sunday against the Jets.

The Philadelphia Eagles are banged up on the interior of their offensive line, but are a relatively healthy team heading into Week 13 of the season. The New York Jets, meanwhile, are missing a number of their best players on injured reserve.

Here is the Eagles-Jets injury report, with analysis.

• Wednesday: The most notable name here is Jalen Hurts, of course, who said during his media session on Wednesday that he will play on Sunday.

Otherwise, while seemingly a lengthy list with 12 names on the initial injury report, there are no real surprises above, and two of the players who did not participate at all are out with illnesses.

• Friday: Howard is out, and while Scott is questionable, it's a bad sign for his availability that he hasn't practiced all week.

But the real story here is Hurts, who was limited all week with his ankle injury. That felt initially like some gamesmanship on the Eagles' part, but Gardner Minshew took some first-team reps this week, so there may actually be some intrigue here. It's worth noting that Hurts said confidently on Wednesday that he would be ready to go on Sunday.

• Saturday: Hurts is reportedly out.

MORE: Rounding up the experts' predictions for Eagles vs. Jets | Mailbag: How much could Russell Wilson cost in a trade? | Week 13 NFL picks

• RG Brandon Brooks (IR): Brooks suffered a pectoral injury against the 49ers. It's "only" a pec strain, as opposed to a tear, so while he'll likely miss time (about 8 weeks, per Lane Johnson) on injured reserve, it was initially not thought to be a season-ending injury. Brooks got hurt Week 2, so Week 12 was 10 weeks. Nick Sirianni has been asked multiple times about Brooks' possible return, but no useful information has been given.

• LB Davion Taylor (IR): Taylor started six games for the Eagles. He had his best game as a pro in Denver Week 10, when he forced a pair of fumbles against the Broncos, one of which was returned for a touchdown by Darius Slay. Taylor was drafted as a raw prospect out of Colorado during the 2020 NFL Draft, and while he still has a ways to go as a professional linebacker, he has made positive strides during the 2021 season. He was replaced in the lineup by Alex Singleton against the Saints.

• Wednesday: Davis is the most notable name above. He missed the Jets' Week 12 game against the Texans. He leads the team with 477 receiving yards.

• Thursday: Davis did not practice once again.

• Friday: Full participation in practice for Franklin-Myers, Moses, and Williams is a good sign for their availability. Davis was a limited participant, which helps his odds of playing a bit.

• LT Mekhi Becton: Becton is a 6'7, 365-pound mountain of a man who had a good rookie season after the Jets picked him in the first round of the 2020 NFL Draft. George Fant has been a solid fill-in for Becton at LT.

• S Marcus Maye: Maye is a quality starting safety who the Jets slapped the franchise tag on this past offseason. His season is over with a torn Achilles. Old friend Elijah Riley has started the last two games for the Jets at safety.

• DE Carl Lawson: Lawson was a free agency signing of the Jets' this past offseason, scoring a three-year deal worth $45 million, but his season ended during training camp with a torn Achilles.

• RB Michael Carter: Carter has had a good rookie season, gaining 430 yards on the ground and 308 through the air.

• S Lamarcus Joyner: Joyner was a starting safety to begin the season, but he only played nine snaps Week 1 before having his season end with a triceps tear.

• DE Vinny Curry: The Jets signed Curry this offseason, but he missed the entire season with a rare blood disorder.

• CB Brandin Echols: Echols is a rookie sixth-round pick who started nine games in the slot for the Jets before injuring his quad.

• TE Tyler Kroft: Kroft had 10 catches for 104 yards and a TD before landing on IR with a lung laceration.