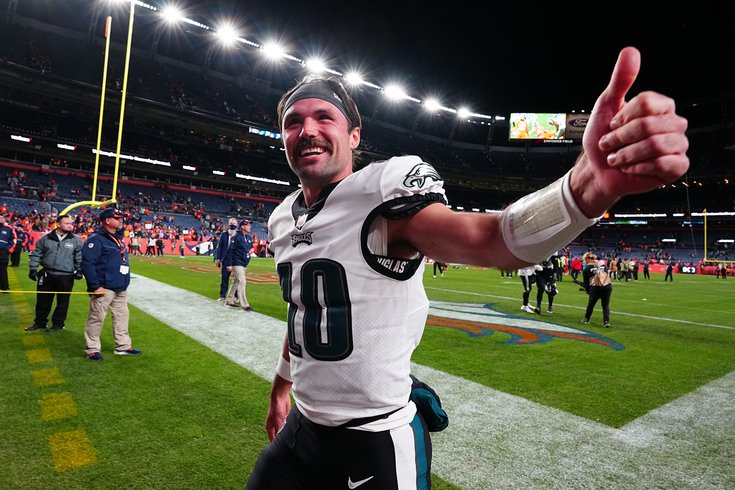 Gardner Minshew doesn't have a gigantic hand. It's just closer to the camera than the rest of him.

Philadelphia Eagles starting quarterback Jalen Hurts has been ruled out Sunday against the New York Jets, and Gardner Minshew will start in his place, according to a report from Derrick Gunn.

Jalen Hurts is out for tomorrow .. Gardner Minshew is in. Boston Scott will be a game time decision .

Hurts injured his ankle last Sunday against the New York Giants, and has apparently not recovered in time for Sunday's game against the Jets.

MORE: Five over/unders for Eagles' Week 13 matchup against the Jets | Week 13 NFL picks: Rounding up the experts' predictions for Eagles vs. Jets

The Eagles traded a sixth-round pick for Minshew in August. He got some playing time in a blowout win against the Detroit Lions earlier this season, but this will be his first "real" action as an Eagle quarterback.

Minshew, who turned 25 in May, was a sixth-round pick of the Jacksonville Jaguars in 2019. He played in 23 games in his two-year career with the Jags, starting 20, with a record of 7-13 on a bad team. His stats:

Minshew is a more polished passer than Hurts, but obviously does not possess Hurts' ability as a runner. While the Eagles would like to get as much of an evaluation on Hurts as they can by watching him play, this will be an interesting opportunity to have a different quarterback run Nick Sirianni's offense, for comparative purposes.

Minshew's opportunity will come against the team with the worst point differential in the NFL, at -135.

As a reminder, the Eagles' No. 3 quarterback is Reid Sinnett, who the Eagles claimed off of waivers in October.