Five over/unders for Eagles' Week 13 matchup against the Jets 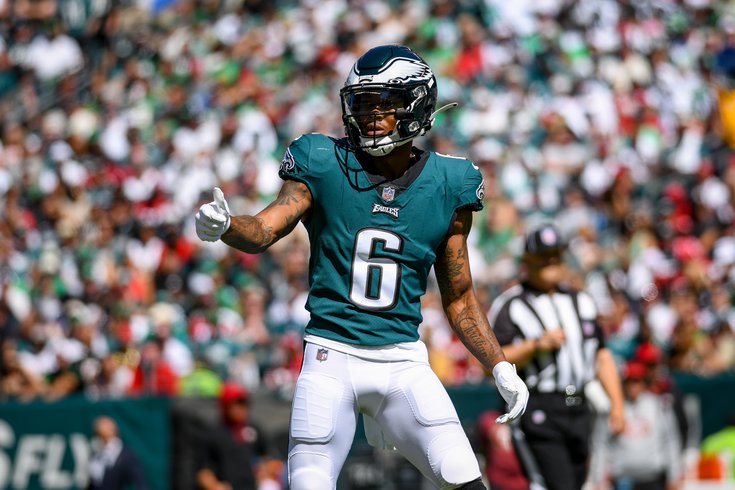 For the second time in as many weeks, the Eagles will make the trip up I-95 to East Rutherford for a game at MetLife Stadium, this time against the 3-8 New York Jets. And they'll be hoping the outcome is a bit more positive than it was a week ago, when they fell to 5-7 with a 13-7 loss to the Giants.

UPDATE: Jalen Hurts is reportedly out for Sunday's game against the Jets. So just keep that in mind when reading the analysis that follows. Otherwise...

You can read more from Jimmy Kempski, here.

Injuries to Jalen Hurts, Miles Sanders and Jason Kelce all loom, but all three players are expect to take the field on Sunday against the Jets as the Eagles look to get back in the playoff conversation after taking a step back a week ago and watching another division rival in Washington move into the final NFC wild card spot the Birds were hoping to occupy.

We've already broken down the injuries on both sides, given you some matchups to watch and offered up our own predictions — as well as rounded up some picks from the local and nation media. Now, as we do every week, let's take a look at some numbers to keep an eye on in the form of our five over/unders for Eagles vs. Jets...

Considering the strength of this Eagles team is their offense — last week's debacle aside — and the Jets are the worst team in the NFL in points allowed, you'd think this number might be a little higher. But with the Eagles quarterback situation in question (more on that in a second) and other injuries to their offensive line, running backs and more, it's perhaps not that surprising that this number is hovering just around 45 or slightly below.

Prior to nearly being shut out by the Giants a week ago, the Eagles and their opponents had combined to score at least 43 points in every game dating back to Week 6. And given that these two teams combine to allow north of 53 points per game this season — even if they only average 43.5 total points scored — the safer bet here seems to be on the over.

All of that being said, it's hard to bet on this Eagles team to score a lot of points after the performance we saw last week at MetLife, not to mention their injury questions and the slower ground-and-pound style they've employed recently. Sure, they might be due, but until I know for sure the status of Hurts and some other Eagles, like Boston Scott, I'm going to err on the side of caution here.

[Obviously, this one's off the board...]

Yes, we mentioned that Hurts is questionable for this one after tweaking his ankle in that loss to the Giants. He was able to finish the game, which bodes well for his chances this Sunday, as does the fact that he told reporters early in the week that he's playing. But what doesn't bode so well is the fact that Hurts was limited in practice all week and has carried that questionable designation — not to mention the lack of a firm commitment from Nick Sirianni one way or the other — throughout the week.

For this exercise, we'll assume Hurts does play. But even then, we have to wonder just how mobile he'll be against the Jets. I'm sure part of the calculus that goes into the decision to play Hurts involves his mobility, because if he can't run and keep defenses on their toes, he becomes a far less effective passer (and he already has plenty of issues in that department). At that point, the team could consider going to Gardner Minshew, especially with the bye waiting for them next week. But based on Hurts' own comments, we're expecting him to play. It's just a matter of how well he can move.

We've set this number below Hurts season average of 57.9 rushing yards per game with the understanding that even if he does play he won't be 100% — and we would've used the actual sports book number, but given the uncertainty over his status, many don't even have a line listed for Hurts. But we think it's going to be almost impossible for Sirianni to keep Hurts off the field, and once the young QB is out there, we all know he's a gamer. Look for him to get his rushing yards.

MORE: Five college prospects who could interest the Eagles in the 2022 NFL Draft | Mailbag: How much could Russell Wilson cost in a trade?

That's DeVonta Smith's average targets per game through the first 12 games of his career. And while that's more than anyone else on the team, it does feel like it could be higher given that he's the team's best receiver. And after the Eagles' most recent loss, it appears Smith thinks it could be higher as well.

DeVonta Smith livid as he came off the field. Threw his helmet to the bench. Wanted the ball. Was open. Never saw a target on the #Eagles' final two drives.

Replays showed Smith wasn't as open as it originally appeared on the Eagles' doomed final play from scrimmage in that loss to the Giants, but it was about far more than that. Reagor finished the day with just four targets total, tied for his second fewest of the season. Perhaps some of that frustration is a cumulative effect of the Eagles' change in offensive philosophy. Prior to the change that really started with the win over Detroit, Smith was seeing 7.6 targets per game. In the five games since, that number has dropped to just five targets per game.

Assuming Hurts is playing, look for the Eagles to get their rookie receiver more heavily involved in this one.

A combination of a run-heavy scheme, a very good offensive line and a mobile quarterback have kept the Eagles below two sacks allowed per game this season. And in the five games since the Birds have changed their offensive identity, Hurts has been sacked just seven times in five games. Now, however, they'll enter Sunday without Jack Driscoll, who was placed on IR for the second time this season, and a less-than-100-percent Jason Kelce. Not to mention a potentially not-as-mobile Hurts as he continues to work back from that ankle injury.

The Jets defense, meanwhile, is averaging just over two sacks per game, but are coming off a game in which they sacked Tyrod Taylor five times. But over their previous six games, they had just seven sacks combined. In fact, the Jets have been very hit or miss this season, with 12 of their 25 sacks coming in just two games. This could actually be a key number in this game, with the Jets registering at least three sacks in each of their three wins. In their eight losses, they have just one game where they sacked the opposing QB three or more times. Since I'm picking an Eagles win on Sunday, I'll stick with the under here.

Another big key in the Eagles' recent run of success prior to the loss against the Giants was big plays coming from their defense. Last week, however, they failed to register a takeaway for just the second time in their last 10 games. Sure, the defense held New York to just 13 points, so it's hard to give them too much grief, but a key takeaway like they had against the Saints or Broncos could've been the difference. The Jets have been the worst in the NFL in terms of turning the ball over with 24 in 11 games. No overthinking this one.