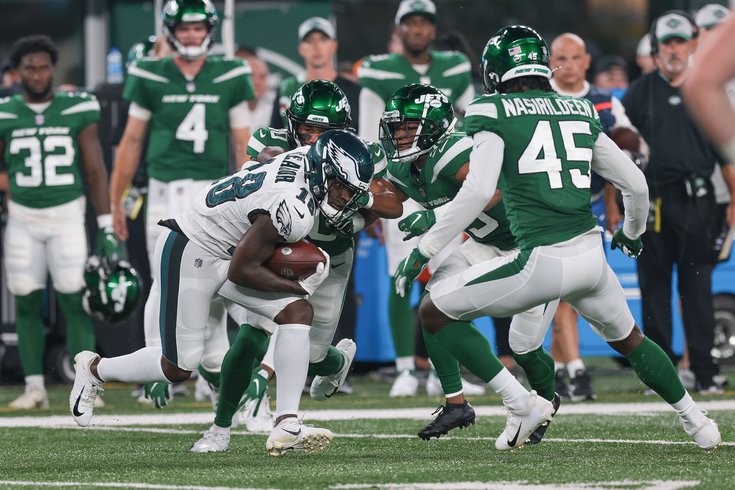 Just last week, I wrote in this space that the Eagles were suddenly one of the hotter teams in football after winning three of four games. So of course they went out and played their worst game of the season, at least offensively, falling to the Giants 13-7 at MetLife Stadium.

This week, they'll return to the scene of the crime, but the opponent will be different as they take another trip up I-95 to face the Jets, a team they've never lost to in the history of their franchise. And although the Jets are worse than the Giants, the Eagles learned a hard lesson last week that despite their recent run of solid play, they're not good enough to take any team lightly — or to count any win as a guarantee.

But with the Eagles as touchdown favorites on the road and with nothing on the horizon but a Week 14 bye, this is clearly another game the Birds should win. Unlike last week, however, we won't be counting our chickens before they hatch.

As we do every week, we've rounded up a slew of predictions from both the local and national media to get a sense of how the experts see this Eagles vs. Jets matchup playing out — including a few against the spread — and you probably won't be surprised to see them as similarly one-sided as last week. Let's dive right in...

• PhillyVoice: A week after we all incorrectly picked the Eagles to beat the Giants, it appears we did not learn from our mistakes, with all seven of us once again backing the Birds. Here's the prediction from Evan Macy, who is tied with John McMullen atop our staff leaderboard at 9-3 this season and is taking the Eagles by a final of 27-14.

I'm not going to overthink this one, or dive into some deep analysis. The Jets are bad. And the Eagles have never lost to them. That will not change on Sunday.

Philly needs this win before the bye to remain relevant in the playoff race. I can't really see a scenario where they are so bad Zach Wilson beats them. Let's send Philly into the week off in a good headspace — please. I don't want to even imagine what local talk radio will be like otherwise.

• Inquirer.com: All three of their Eagles writers are picking the Eagles on Sunday, including EJ Smith, who has them winning 28-13. Here's some of what he had to say...

... Jalen Hurts had serious trouble protecting the football against the Giants, but the three-interception performance was an uncharacteristic one for him. The Giants defense, especially with their heavy use of sub packages and interchangeable players, posed problems that the Jets’ defense won’t. If Hurts makes better decisions against the Jets, it’s easy to see a scenario in which the Eagles offense has a bounce-back game.

On the other side of the ball, the Eagles’ defense is coming off a solid performance albeit against a banged-up Giants offense. The Jets have Zach Wilson back in the lineup and, arm talent aside, he’s probably a welcome sight for the Eagles. He’s had his own struggles avoiding turnovers this season, throwing 10 interceptions to just four touchdowns. Wilson could still develop into a special quarterback someday, but the current version of the rookie is exploitable by the Eagles turnover-focused defense.

• NJ.com: Five of their six writers are taking the Birds, with the lone exception — shocker — being Jets writer Joey Chandler. Here's how he sees this one playing out...

Upset alert. A second straight trip to MetLife Stadium proves disappointing once again for the Eagles. Robert Saleh becomes the first ever Jets coach to get a win against the Eagles. Jets 23, Eagles 20.

• Bleeding Green Nation: Unsurprisingly, all seven writers at BGN are picking Philly to win this one.

• The Athletic: All eight of their writers are predicting an Eagles' victory on Sunday, but this doesn't include beat writers Zach Berman and Bo Wulf, whose picks haven't been posted yet.

Jalen Hurts' ankle injury is worth monitoring, as Gardner Minshew is getting extra reps in practice this week. Even if Minshew were to start, I'd like the Eagles to cover because power-running teams have ground this penetrating Jets defense into dust. New York is becoming a strong pass-rush team, which should be mitigated by Philly's refusal to pass. Zach Wilson didn't show a lot of development in his first start back in the saddle.

• ESPN: Each of their 11 experts is picking the Eagles over the Jets.

The Jets won last week on the road, while the Eagles lost to the Giants in the same stadium they will play in this week. The Eagles offense was lifeless last week, while the Jets actually showed some life. I think the Jets will hang around, but the Eagles will win it late.

• CBS Sports: Seven of their eight experts are predicting an Eagles win on Sunday, but just two believe the Birds will also cover the 6.5-point spread.

MDS’s take: The Eagles blew a huge opportunity against one New York team last week. They’ll do much better against the other New York team.

• Bleacher Report: Eagles 27, Jets 17 (NOTE: Four of their six writers are taking the Birds to cover the spread.)

The Philadelphia Eagles suffered an upset at the hands of one New York team last week. This time, a slim majority of our pickers feel they can bounce back in a critical road matchup with New York's other team, the Jets.

"This number is a bit daunting," Gagnon admitted. "But I'm all about patterns. New York is a bad team that is unlikely to play well back-to-back weeks after beating the Texans Sunday, while the Eagles have proven to be quite resilient this year and are coming off a tough showing against the Giants.

"The backdoor cover is worth considering in terms of how much you put down on this one, but I'll still take Philly with less than a touchdown on the line in a crucial game."

The Jets are a league-worst 3-8 against the spread this season, and five of their eight losses have come by 15 points or more. Meanwhile, each of Philly's last three wins have come by double-digit margins. So while our crew is far from unanimous here, the Eagles feel like the safer bet.

• Sheil Kapadia, The Athletic: Sheil picks games against the spread every week, and this week he thinks the Eagles both win and cover.

The Eagles turned the ball over four times last week but still had a chance to win. Jalen Reagor let that chance slip through his hands on the team’s final offensive play, and he has been getting crushed for it in Philadelphia all week. The Eagles still ran for 208 yards (6.3 YPC), and the defense held the Giants to 17 first downs.

The Jets were able to eke out a win against the Houston Texans, but it wasn’t pretty. Seven of their eight losses this season have been by at least seven points. I like the Eagles to bounce back.

The Eagles were a dud in Week 12 against the Giants, but Jalen Hurts should be able to bounce back against a Jets' defense that has allowed 266.2 yards per game. Zach Wilson is in his second start since returning from a knee injury, but the Eagles will come up with the key turnover in crunch time.

The Eagles forced the issue a little more in the passing game last week with bad results as Jalen Hurts struggling with interceptions and nailing down connections with his receivers and tight end Dallas Goedert downfield. They will go back to their run-heavy, grinding ways with Hurts and Boston Scott leading the change with Miles Sanders and Jordan Howard hurting. Their defense will have little trouble frustrating Zach Wilson, but the zone will open up enough plays for the Jets to keep it close. This second consecutive trip to MetLife Stadium works much better.