Eagles vs. Jets: Predictions, betting odds and more for Week 13 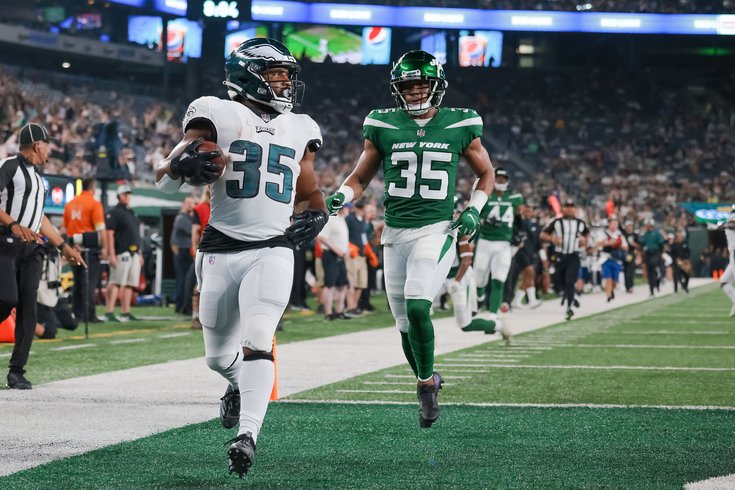 After an ugly and unexpected loss to the Giants at MetLife Stadium last Sunday, the Eagles will return to North Jersey in Week 13 for a date with the Giants' East Rutherford roomies, the New York Jets. Will this trip treat them any better?

After coming into last week's matchup as a relatively healthy team, the Birds are suddenly a bit banged up as Jason Kelce, Miles Sanders and even Jalen Hurts were all injured at one point or another in that loss to the Giants. And that doesn't even include the season-ender suffered by right guard Jack Driscoll, who had been filling in for Brandon Brooks. Assuming Hurts' ankle is good to go by Sunday, it's hard to imagine him playing much worse than he did in Week 12, when he threw a trio of interceptions and flirted with a single-digit QB rating, but just typing that feels like tempting fate.

On the other side of the ball, Zach Wilson will be back under center for the Jets after returning in last week's win over the Texans, but running back Michael Carter was placed on IR on Saturday and will miss this week's game against the Birds, leaving Tevin Coleman as the team's top option.

Can the Eagles shake off that terrible loss to the Giants and get back on track as they continue to make a late push for the playoffs? We'll find out on Sunday. In the meantime, here's a look at how our writers see this Eagles vs. Jets matchup playing out...

Jalen Hurts is coming off his worst performance as a professional quarterback, and will look to turn things around against the Jets, a team with the worst point differential in the NFL.

The Jets have nothing. Offensively, Zach Wilson is statistically the worst starting quarterback in the NFL, and the Jets' leading rusher, Michael Carter, is out. Defensively, they're allowing opposing quarterbacks to have a passer rating of 107.0, the highest in the NFL, while also failing to stop the run. It's hard to see how they they've even won three games this season.

Not that this matters for Sunday's matchup, but the Eagles are 11-0 all-time against the Jets. They'll get to 12-0.

I'm not going to overthink this one, or dive into some deep analysis. The Jets are bad. And the Eagles have never lost to them. That will not change on Sunday.

Philly needs this win before the bye to remain relevant in the playoff race. I can't really see a scenario where they are so bad Zach Wilson beats them. Let's send Philly into the week off in a good headspace — please. I don't want to even imagine what local talk radio will be like otherwise.

The Jets are bad. They're 3-8, are last in the NFL in points allowed and 27th in points scored and have the worst point differential of any team. The Eagles should easily take care of business on Sunday. But they should've done the same last week against the Giants, and we all saw how that turned out. For the sake of Eagles fans everywhere, let's hope this one is over early so they can switch over and watch the Union play for the Eastern Conference title — but mainly just for their own mental health, as a loss to the Jets (or even a tight game) would send this fanbase into a death spiral.

Luckily, while we see it perhaps being a little closer than some others, we still see the Birds coming away with a double-digit win. Jalen Hurts might not be 100% and that could limit his effectiveness on the ground, but luckily he'll be going up against a Jets pass defense that can't stop anybody, so all he should have to do is make the throws. However, that might be easier said than done after last week's performance. This could've been a trap game heading into the bye had the Eagles won last week. But that got their stupid loss out of the way early and should take care of the Jets on Sunday.

It took a shockingly bad performance from Jalen Hurts (and a vintage Jalen Reagor effort) for the Eagles to lose to the Giants last week. The Jets have some decent-ish wins this season, but they are 3-8 for a reason, and Zach Wilson has been stinking it up whenever he's been available to play.

Perhaps this confusing Eagles team is the one that finally registers Philadelphia's first-ever loss to the Jets, but I'm not betting on it.

The Eagles have never lost to the Jets in franchise history. The Jets are, well, the Jets. They're building and growing, just like the Eagles, but the Eagles are a few steps ahead. Both teams are bad. If the Eagles blow this, serious questions have to start being asked about what progress the Eagles have made in Nick Sirianni's first year.

The Eagles should bounce back rather nicely against the Jets this week, with or without Jalen Hurts. The run game should be in full effect either way. The Jets are just so bad. They beat the Texans on Sunday, but Houston is the worst team in the NFL, as they don’t even try to win games. The Jets are still — somehow — trying to put together something on offense. It’s just their defense is so atrocious that anyone in the NFL, CFL, NCAA, and even some top high schoolers can throw against them. I’d bet Imhotep could put up 200 easily on the Jets D, so expect the Eagles to throw because they can.

If the Eagles lose this game then it’s perfectly OK to call for people’s jobs, including Hurts if he’s out there. This game is gift wrapped for the Eagles following a brutal loss where their offense stalled. I’d take the Eagles laying anything less than a TD.

Maybe the key to handicapping this game is Unsolved Mysteries because the Eagles have never lost to the Jets in the regular season dating back to 1973 when Joe Namath's knee was acting up in pre-game warmups forcing Weeb Eubanks to turn to  Al Woodall at quarterback. It seemed like New York was persevering at first, holding a 17-0 edge before a pick-six by John Outlaw helped turn the tide and lead to a 24-23 Eagles' comeback win.

The bookend to that game is Nate Gerry's pick-six from another backup QB in 2019, the overmatched Luke Falk, who was sacked nine times at Lincoln Financial Field in a 31-6 Eagles' laugher.

In between those two games are nine more Philly victories which add up to an 11-0 all-time mark against the NYJ, currently, the most wins without a loss by any NFL franchise in a head-to-head environment.

The moral of that story is don't get bogged down with a banged-up Jalen Hurts being limited or Zach Wilson finally getting a firmer grasp on something that isn't off-platform. The Eagles will beat the Jets because they always do.