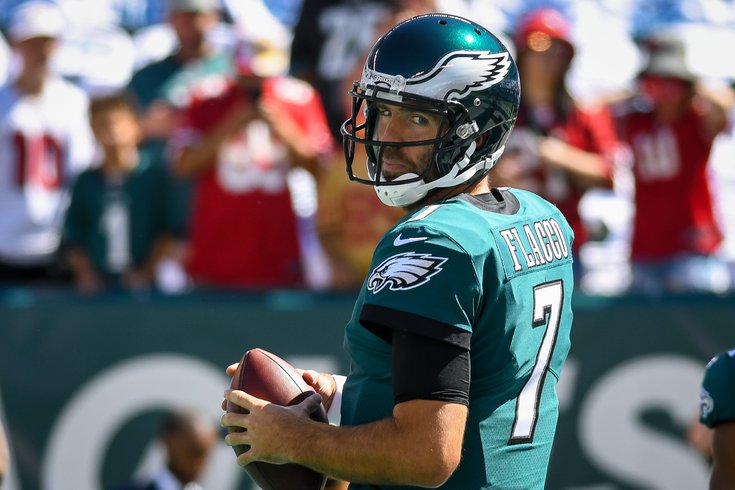 The Philadelphia Eagles made a trio of roster moves on Monday. They traded QB Joe Flacco to the New York Jets, they claimed former Miami Dolphins QB Reid Sinnott off of waivers, and they released LS Rick Lovato.

The Eagles traded Joe Flacco to the Jets

In return, the Eagles will receive a sixth-round pick that reportedly can become a fifth-round pick if Flacco hits playing time incentives. The Eagles have now made seven trades that affect their 2022 draft capital. They now have 11 picks in the 2022 draft, updated here.

Gardner Minshew will become the Eagles' new No. 2 quarterback behind Jalen Hurts. The Eagles previously traded a sixth-round pick of their own to the Jacksonville Jaguars for Minshew.

Asked on Monday whether he has considered a change at quarterback, Nick Sirianni said that Hurts will remain the starter.

Sinnett was a 2020 undrafted free agent of the Tampa Bay Buccaneers out of San Diego University, who did not make their roster out of camp. He has toggled back and forth between Miami's practice squad and their active roster since.

A scouting report via Lance Zierlein prior to the 2020 NFL Draft:

Pro-style quarterback with good size and touch who will need to overcome a lack of experience and a massive step up in competition. Sinnett is a cerebral player but lacks NFL arm strength and might need to play in a play-action heavy offense that allows him to throw to space rather than tighter windows. He will take what defenses give him and is fairly accurate when the pocket is clean. He's not very mobile and will be ineffective with NFL pressure bearing down on him. Sinnett has developmental traits and intelligence. He might be a practice squad candidate.

Sinnett will be the Eagles' No. 3 quarterback. He has not yet appeared in an NFL regular season game.

Lovato's release was likely for roster maneuverability only. He should return to the team.

MORE: Eagles 'if the season ended today' 2022 draft pick tracker Week 8 NFL odds: Point spread and total for every game, including Eagles vs. Lions | Handing out 10 awards from the Eagles-Raiders game