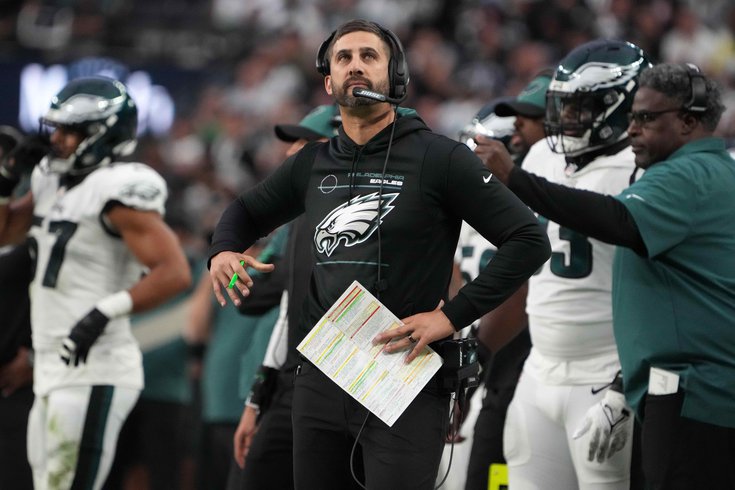 LAS VEGAS - There was always some danger involved with Jeffrey Lurie’s decision to pluck Nick Sirianni out of relative obscurity to be the head coach of the Philadelphia Eagles.

Some of that danger was revealed during and after the team’s ugly 33-22 setback to the Raiders in Sin City on Sunday to drop to 2-5 on the season.

Sirianni not only replaced the only Super Bowl-winning coach in franchise history in Doug Pederson, but he was also given more autonomy than Pederson when it came to the coaching staff.

That counterintuitive decision by Lurie allowed Sirianni to have a major hand in hiring most of his assistants, including defensive coordinator Jonathan Gannon, who the Philadelphia brass had a close eye on to be the DC no matter who Lurie ultimately decided should be in the big chair.

To be fair, Sirianni himself was already well known in NFL circles, although getting the Eagles job was considered skipping steps by some considering it was his first head-coaching interview and Sirianni had yet to get the hot coordinator tag placed on him.

Arthur Smith and Robert Saleh were Mugatu’s chosen ones in this year’s coaching cycle.

Sirianni was the shock candidate, a late addition to a coaching search that seemed to be open-ended until Lurie found someone he felt more comfortable with than Josh McDaniels, the Patriots OC with the bad reputation after flaming out in Denver and leaving Indianapolis at the altar in an unprofessional 180 that led Frank Reich to the Colts and ironically set Sirianni on his course to the Eagles.

Sirianni quickly gained some credibility by clowning Smith in the season-opener, but there was a bit of a Chip Kelly energy there with Sirianni taking advantage of the unknown. The day the RPO-heavy offense installed for Jalen Hurts was unveiled was the first the future defensive coaches on the Eagles’ sked got let in on the secret.

And things have gotten uglier and uglier and uglier since then with the latest debacle being 30 unanswered points by the Raiders on Sunday before the soon-to-be-patented empty yardage was put up to make things look closer than it really was.

This isn’t a story about bad offense or bad defense, though. It’s a thesis about a young coaching staff that is now being second-guessed.

On the field, you could see it with Jason Kelce’s uncharacteristic frustration bubbling over and off of it, Fletcher Cox took away any guesswork by taking aim at Gannon, who is this week's scapegoat.

Jim Schwartz was not a favorite of Eagles fans, but he sure was a favorite of Cox and the defensive line as a coach who called the group his engine and gave them one job description: get after the quarterback.

On Sunday, the Eagles had no sacks and two QB hits while Derek Carr completed a mind-numbing 31-of-34 passes. The Raiders’ signal-caller was the fourth this season to complete at least 80 percent of his throws against this defense, joining Dak Prescott, Patrick Mahomes, and Tom Brady.

Cox was asked if he plans on expressing his frustration to Gannon.

“I don’t think it’s my job to talk to the coaches about scheme or anything like that,” the veteran said. “I think that the biggest thing is the coaches. They’re here to coach us. We have to play what’s called. Obviously, as a player, the coaches and all these assistants spend so much time game planning, so you just have to buy into what’s being called.”

Players will always buy in if they believe coaches are making them better. If the opposite is true, the coaches start to lose the locker room.

“I think anybody being in the league 10 years and playing at a really high level for nine-and-a-half of them, for me it can be frustrating,” Cox said. “It is frustrating. The biggest thing for me is to stay a pro, stay professional. I have a C [captain] on my jersey, so I have to keep everybody up.”

Sirianni is also starting to hear the whispers and doubling-down seems to be taking a backseat to throwing darts.