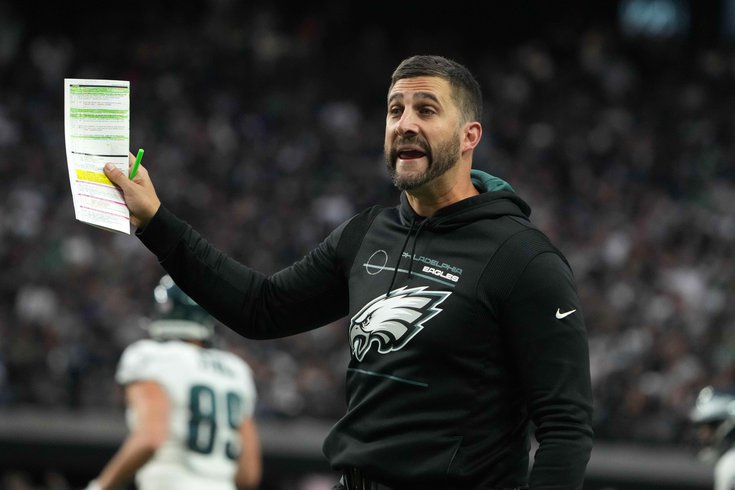 Welp, that was ugly. Coming off a "mini bye" after their Thursday night loss to the Tampa Bay Buccaneers 10 days prior, the Philadelphia Eagles got absolutely wrecked by the Las Vegas Raiders on Sunday, even if the score was "only" 33-22. As always, win, lose, or tie, we hand out 10 awards.

1) The 'One and Done?' Award 🚨: Nick Sirianni and Jonathan Gannon

When the 2021 season began, if you were told that the Eagles would start their season off at 2-5, most realistic fans wouldn't be very surprised by that. However, the brand of 2-5 football that the Eagles have played has been ugly, boring, often times illogical in terms of the coaches' schemes not fitting the strengths and weaknesses of the players.

The offense is predictable, and the defense offers no resistance whatsoever, almost by design.

The Eagles will have an extremely soft schedule the rest of the way, which will give the staff a chance to show better results on the field than they have shown through these first seven weeks, but they have done very little to inspire confidence in the fan base that they are the long-term answer for this franchise.

Would Jeffrey Lurie fire a head coach that he knew would need some time to grow into the job? If things don't improve, he'll have to weigh the benefits of having patience with a young staff vs. wasting further seasons if they don't provide reason for hope.

Derek Carr was 31-for-34 passing. That would be a completion percentage of 91.2 percent. That's nothing new this season.

In the Eagles' first 1,285 games, they allowed 8 quarterbacks to complete 80 percent of their passes.

In the Eagles' last 5 games, they've allowed 4 quarterbacks to complete 80 percent of their passes.

In Gannon's defense, every single blade of grass at least 50 yards down the field is accounted for. The Eagles got that on lock. Unfortunately, they just don't cover the short to intermediate parts of the field.

Raiders receivers were wide open all day underneath, and Carr picked them apart, with ease. So did Patrick Mahomes. So did Tom Brady. So did Dak Prescott. It's been kind of a theme.

The Raiders entered this game as one of the worst rushing offenses in the NFL, with their running backs averaging a paltry 3.4 yards per carry. On Sunday, they ran for 119 yards and 2 TDs against an Eagles defense that has struggled stopping the run all season.

Heading into this matchup, one of the areas the Eagles should have been able to exploit was the Raiders' injury- and talent-depleted offensive line. Here were their rankings, via PFF, prior to this game:

After the game, Fletcher Cox was asked why Carr was able to complete 31 of 34 passes. He answered that Carr was getting the ball out quickly, and suggested that folks break out stopwatches to time his throws. He also questioned his utilization in Gannon's scheme, saying that he can't be as aggressive this season as we was in previous seasons. And for good measure, he said that he doesn't get paid to play screens; he gets paid to sack the quarterback.

On that last point, Cox did neither in this game, and neither did anyone else.

In terms of "stock up, stock down" after each of Hurts' first seven games, I would score it like so:

Against the Raiders, Hurts was 18-for-33 for 236 yards, 2 TDs, and 0 INTs. The numbers look fine, but they don't really matter. What matters is that Hurts remains an inaccurate passer who misses too many throws that are layups for other quarterbacks around the league. Hurts has some appealing traits, but you can't win in the NFL if you don't have an accurate passer, and the improvement from Hurts in that area just isn't there.

Additionally, in the fourth quarter, Hurts appeared to have a chance to score on a scramble. He really only had a defensive back between him and the goal line, and instead he jogged out of bounds. At a minimum, he could have at least gotten the ball closer to the goal line, but he was content to run out at the 6. It was an odd play by a quarterback who has the ability to run through tackles.

Maybe he was hurting, which would certainly be understandable as he took a lot of hits. One might say it's easy for a reporter sitting comfortably in the press box, munching on a bag of Skittles, to say that Hurts should have tried to score, taking whatever hit came with the effort. And that's true. However, it's not exactly a play that will inspire teammates.

The Eagles eventually did score on that drive, so it didn't affect the final score, but it did at least feel noteworthy.

Hurts was only sacked twice, both times by Yannick Ngokoue, who gave Jordan Mailata all that he could handle. Two sacks doesn't look bad on paper, but the offensive line allowed pressure all day. On a day it seemed like the Eagles should win in the trenches, they got bullied on both sides of the ball.

During the second drive of the game, Miles Sanders got tackled and tried to limp off the field, favoring his right leg. He couldn't make it, and went down. He was then attended to on the field, helped off the field, escorted to the blue medical tent, and eventually carted off with a towel over his face.

His exit took place on a day in which he was finally a big part of the game plan, as he had six carries for 30 yards at the time he went down. In the first six games of the season, Sanders was averaging 9.5 rushing attempts per game, and the coaching staff had been heavily criticized for not running the ball.

Here was the play:

It looks like Miles Sanders hurt his right ankle
pic.twitter.com/Jo1GIMnny7

And so, Eagles fans will have to wait for the news on Sanders, and will hope that the number 26 isn't added to Sirianni's visor.

Ertz scored on a 47-yard reception in his first game with the Cardinals. And look at the yards after the catch!

All the YAC Zach.

Ertz went from a team that is now 2-5 to one that's 7-0. Other Eagles vets will no doubt be jealous.

After trading Ertz, Roseman was asked if other veteran players could be dealt at the trade deadline.

“I don’t view us as being sellers," Roseman said.

Well, the team is now 2-5, and very clearly can't hang with good teams. If they're not sellers, they're delusional.

10) The 'At Least There's Something Else To Root For' Award 🐬: The Miami Dolphins

Hey, at least the Dolphins lost, and to a bad Falcons team at that. With the outcome of the Colts-49ers Sunday Night Football matchup still undecided, the Eagles would have the second, sixth, and ninth overall picks in the 2022 NFL Draft, if the season ended today (it doesn't).