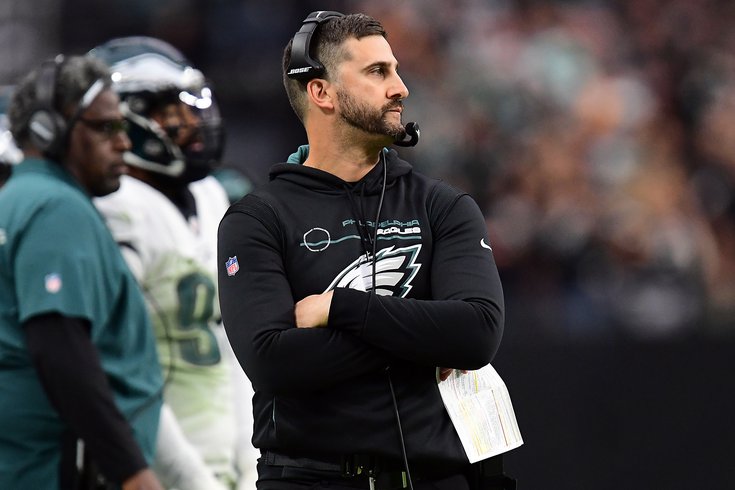 The Eagles followed up a forgettable first half Sunday with an even worse second half, shooting themselves in the foot and being positively dominated by the Raiders on both sides of the ball.

Falling to 2-5 on the year after the 33-22 loss, talk will be grim around the city after this Week 7 adventure in Sin City.

With Kyle Neubeck focusing on the Sixers game against the Thunder Sunday night, you'll have to settle for my take on the good, the bad and the ugly from the craptastic game we all just sat through.

• No one expected the Eagles to make the playoffs this season. Even the most optimistic of fans had them winning seven, maybe eight games. As hard as it is to admit, the loss they had to the Raiders Sunday, while embarrassing and not even close to reassuring, is a good thing for the franchise's longterm outlook.

Draft position counts for a lot in the NFL, and the better picks the Eagles have to maneuver with, the better players they can acquire and the better ammo they have for Howie Roseman to use during the offseason. The setback also helps to solidify them as sellers at the deadline, which is important for the same reasons we mentioned before. They need to get back and collect assets so they can get good.

It's also worth noting that the Raiders are not a terrible football team, and after their quick start to the season few would have penciled in a win for the Eagles in Las Vegas. Things could have changed after Jon Gruden stepped down amid controversy but credit to Vegas for coming together as a team to win two straight following his exit from the team.

With the Lions certainly more beatable next on the slate, things could get a little better next week. Maybe.

• Without Zach Ertz and fresh off the COVID list, Dallas Goedert was one of the lone (still healthy) bright spots in the game offensively, as he made some key conversions and hauled in three passes for 70 yards (plus a two-point conversion). One of them came on a 4th and 10, which is also impressive to see.

• Hey, Boston Scott scored! The running back hasn't seen much action this season but certainly should going forward if the Miles Sanders injury has him missing any time going forward.

• Jalen Reager has been pretty invisible this season, particularly as DeVonta Smith has broken out as the future star wideout for the team, but he made an incredible catch on a desperation hurl from Hurts on the run to make the score a bit more respectable, and perhaps to continue getting snaps with the first team.

Reagor got way, way up for this TD#PHIvsLV | #FlyEaglesFly pic.twitter.com/zFcPK3jN2O

• I have some mixed feeling on Sirianni's decision to attempt an onside kick to open the second half trailing by 10. I like that they're being aggressive. I like that he is self-aware enough to realize that his defense has been absolutely awful in the first half. However, giving the Raiders — who have moved the ball extremely easily all game — a short field to start the half and potentially open up a three possession lead is kind of ill-advised. If it worked I'd feel different but it didn't. So it is clearly "bad."

• Jordan Mailata's facemask penalty, a rare call made on an offensive lineman, negated a big 22-yard run by Jalen Hurts on a handoff option that saw him call his own number. Later in the first drive of the second half, a scrum between the two teams on a third down saw Jason Kelce lose his helmet and get Philly flagged for another 15 after the officials said he removed it on his own. It's one thing for Sirianni to be making questionable decisions or for the Eagles to be unable to execute the plays he calls. It's demoralizing when they execute, save for one player making an unforced error. It's been an inescapable issue all season long and that 15-yard call will likely keep Philly atop the league in penalty yards.

• While we're on the topic of Eagles offensive linemen, what a horrible performance from this group, which should have been better after the return of Lane Johnson. If the O-line can't protect Hurts, there's no way to evaluate him down the stretch this fall and winter like the Birds' front office is desperate to do.

Johnson left late in the game with an injury that shuffled the line once again as the Eagles threatened to score in garbage time. No word yet on what the injury was, though he was seen jogging off the field. Stay tuned...

• The number of times Hurts looked to pass, bailed and ran with the football is really too high. It's probably not a sustainable way to run an offense. Hurts at times resembled the stud high school quarterback who doesn't trust any of his teammates and tries to do everything himself. Eventually Hurts is going to take one too many hits or tweak something. He needs to learn to throw it away and give up on a play — or better yet, make a better throw to his talented receivers that he missed early and often in Week 7.

• Speaking of Hurts, time is ticking as the Birds front office continues to try and determine if they're going to stick with him long term, or use their plethora of draft resources to pick a franchise QB in the 2022 draft. Hurts was once again mostly mediocre with a few flashes of brilliance, and he didn't really do much to help make his case, or make things easy on the Eagles brass.

• Fans were pretty excited to see Darren Waller, who is pretty much the second best tight end in football after Travis Kelce, out for Sunday's game. That the Eagles were unable to make that any kind of advantage is pretty bad. Raiders tight end Forster Morneau had six catches for 60 yards and a touchdown and seemed to be open every play. Similarly, an injury to Josh Jacobs that forced him out of the game made no difference on the burden of the Eagles run defense as Kenyon Drake made the drop-off minimal on the ground (he had 74 all-purpose yards).

• I think Derek Carr's play deserves mention here. We have already criticized, rightfully so, Philly's defense playing like trash but Carr looked like an All-Pro out there. He didn't even throw his third incompletion until midway through the third quarter. And his receivers, Morneau, Henry Ruggs, Hunter Renfrow etc, aren't exactly Chris Godwin and Mike Evans. His numbers: 31-for-34 for 323 yards and two TDs. From an Eagles' perspective?Woof.

• Hurts was in the gun with the Eagles knocking on the door to score their second touchdown when this happened:

👎 Hopefully what happens in Vegas - stays in Vegas!!

The Eagles look awful!!#Eagles can’t bring this kind of football back to Philadelphia

If you look closely, the right guard's hand grazes the ball as it is snapped and it moves just a little bit, enough for Hurts to mis-handle it. A mis-cue like that just as inexcusable as a 15-yard personal foul penalty and far more costly. Maybe without the unforced errors the Eagles still lose this game, but they'd certainly leave Las Vegas feeling a lot better about themselves.