Week 8 NFL odds: Point spread and total for every game, including Eagles vs. Lions 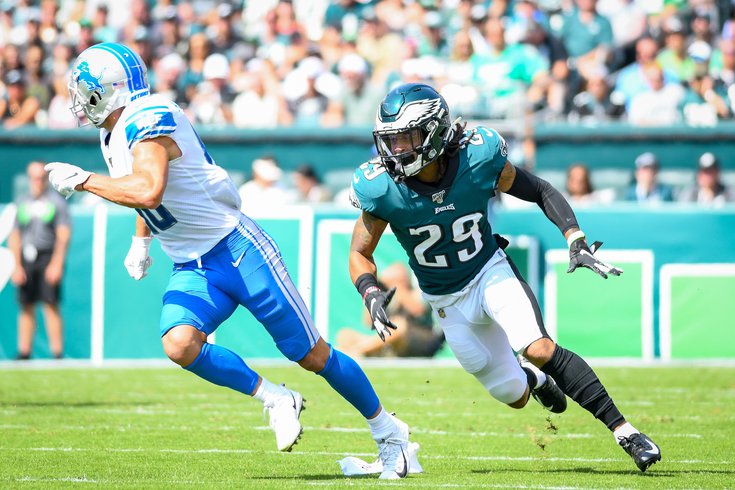 Avonte Maddox during the Philadelphia Eagles last meeting against the Detroit Lions.

We've barely gotten through Week 7 in the NFL, a week that featured plenty of upsets and surprises around the NFL, as well as quite possibly the wettest Sunday night game in history. It was also a week that featured a season-high six teams on bye, including a few contenders. This week, however, there will only be two teams getting the week off — the Ravens and the Raiders — while the rest of the league continues marching through this 17-game season.

Based on the spreads, there appear to be some close matchups on the schedule in Week 8, including a pair of intriguing primetime games on Thursday and Sunday nights. It also features the first time all season the Philadelphia Eagles will enter a game as a favorite, despite their 2-5 record and the fact that they're coming off back-to-back losses including Sunday's debacle in the desert.

Can they bounce back this week against a winless Detroit team? What about the rest of the league? Which teams do the oddsmakers expect to come away with a win as the season rapidly approaches the midway point (which is something I refuse to believe is true)?

As we do every week, let's take an early look at all the Week 8 odds around the NFL for the upcoming slate of games in Week 8...

This might be the best matchup of the week as Aaron Rodgers and Kyler Murray will battle it out in Arizona. The Cardinals are the league's only undefeated team — and didn't waste any time incorporating Zach Ertz into their offense — but going up against the Packers' QB is always a test, no matter how good you are. The oddsmakers apparently don't see much difference between these two, as a game at Lambeau might be a pick-em. But with the game being in the desert, the edge here goes to the favorite. However, bet against Rodgers at your own peril.

As mentioned above, the Eagles find themselves as favorites for the first time under Nick Sirianni. If they play like they did against the Raiders on Sunday, especially for the first three quarters before garbage time took over, it might not matter. The Lions are bad, but the Eagles aren't that far behind them and have been trending in the wrong direction since that Week 1 win over the Falcons.

Next we have a game between the only two teams the Eagles actually managed to beat so far this season. The Panthers appeared to be the surprise team in the NFL this season after the first few weeks. But following that loss to the lowly Eagles, things have spiraled out of control, capped off by Sam Darnold's benching in Carolina's 25-3 loss to a Giants team that in addition to already being terrible was playing without basically any of its skill players. The Falcons, meanwhile, narrowly beat the Jets and the Dolphins in their last two games, which isn't exactly confidence-inspiring.

The oddsmakers clearly aren't expecting a ton of points in this one, as this is one of the lowest point totals we've seen all season. The Niners have lost four straight after beating the Eagles back in Week 2, and perhaps a date with the 3-4 Bears is enough to get them back on track.

This game likely hinges on the status of Browns QB Baker Mayfield. Will he be back in time for Sunday's divisional matchup? If so, look for Cleveland, who should also be getting Chubb back, to take care of business. If not, this could be very interesting.

The bigger story in Houston this week could be a potential Deshaun Watson trade, but that shouldn't have any impact on this game. The Rams are good, the Texans stink. Let's not overthink this one.

The Titans dominated the Chiefs in Week 7 while the Colts were lucky to get out of a soaked Santa Clara with a win over the 49ers. Carson Wentz has looked a lot better in recent weeks but that's only going to matter if the Colts defense can slow down Derrick Henry.

The first-place Cincinnati Bengals. I bet you weren't expecting to hear that after the first seven weeks of the season, but here we are. And with a favorable matchup on the horizon — coupled with a Ravens bye and those Browns injuries — the Bengals could look to increase their lead in the tough AFC North.

Los Angeles is coming off a bye and will host Bill Belichick and the Patriots, who are fresh off a thrashing of the lowly Jets. Things won't be as easy this week for New England, as they'll face a well-rested Justin Herbert and the 4-2 Chargers, who will be looking to move back into a first-place tie with the Raiders.

The Jags will be coming off a bye and facing the Russell Wilson-less Seahawks on a short week. Could that be enough for Urban Meyer's team to pull off the upset and pick up *gasp* their second straight win?

Washington has lost three straight. The Broncos have lost four straight. Something's gotta give on Sunday when these two squads square off in Denver.

A divisional matchup featuring a QB facing his former franchise? No, not that one. That game already happened. We're talking about Jameis Winston taking on the Bucs. Can he do enough to keep up with Tom Brady and Tampa's high-powered offense?

Dallas is a slim road favorite, but the projected point total tells us this one could be fun, as there could be a lot of scoring in the dome in Minneapolis. The Vikings may be 3-3, but their three losses all came against good teams in one-possession games — at CIN (27-24), at ARI (34-33), and vs. CLE (14-7). This should be a good one, and keep with the continuing trend this season of wild/awesome Sunday night games.

One of these teams was blown out on Sunday and the other won in a big way. And it's not the team's you think. The Chiefs may be hitting a low point, but there's not much that can make you feel better about yourself than a date with the Giants. Unless, of course, you're the Panthers.