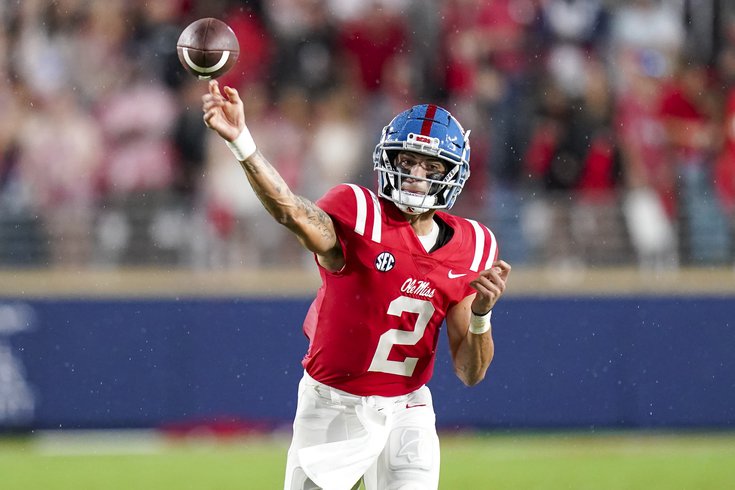 One of the factors of whether Jalen Hurts will be the Eagles' starting quarterback in 2022 and beyond will be the quality of the 2022 quarterback class. Most agree that this class is not as strong as the 2021 class, which had five quarterbacks get selected in the first 15 picks.

It was reported that the Eagles had interest in trading up in the 2021 NFL Draft to select Zach Wilson, who ultimately went No. 2 overall to the New York Jets. If there's a 2022 quarterback prospect who is similar to Wilson — both in terms of skill set and college career path — it's Corral. Both quarterbacks have plus "arm talent," good mobility, an aggressive mindset, and they blossomed later in their college tenures. A highlight reel:

The knock on Corral a season ago was that he took too many risks that led to turnovers. He threw 14 INTs in an otherwise statistically impressive season. In 2021, he has cleaned up some of those bad habits, and has not yet thrown a pick:

We're four weeks into Hurts' "tryout," and there have been some ups and downs. 13 to go. If at the end of the season he has proven that he is the guy, then the Eagles will be able to spend a lot of high picks on other positional needs. That would be great for the future path of the franchise.

If there are questions as to whether he is the guy, we'll go more in depth in profiling quarterbacks like Corral, Liberty's Malik Willis, Oklahoma's Spencer Rattler, North Carolina's Sam Howell, and others. But for now, if you're into the draft, it's at least worth knowing what's out there in this quarterback class, and Corral is my early favorite of the group.

Rutgers has produced their share of quality defensive backs who have had long NFL careers, like the McCourty brothers, Logan Ryan, and Duron Harmon. Young is a defensive back with some positional versatility, as he has played outside corner, some slot corner, and some safety. He has good size, he's a physical tackler, and he's experienced, having played in 37 games already, starting 34.

Most games with 1 or fewer catches allowed in 2019 (power five CBs):

Young only has 1 career pick, so he's not a Day 1 guy, in my opinion, but he is thought of as a technically-sound player who could have a solid NFL career.

In two-plus seasons (27 games) at Penn State after transferring from Lackawanna College, Brisker has 104 tackles (7 for loss), 4 INTs, and 11 pass breakups. He's an athlete, a reliable tackler who will lay an occasional big pop, he has ball skills, and he  has flashed some flair for the timely huge play.

🟢Reads the seam route from the TE, recognizes that he is the primary read
🟢Watches the quarterback.
🟢Jumps the route and gathers the INT with incredible athleticism
🟢Shows his return ability 🔥

Anthony Harris turned 30 today, and Rodney McLeod will be 32 next season. The Eagles need help at safety.

Gee, I wonder if Moss will get compared to Jason Sehorn a time or two throughout his college and professional career.

In 24 career games, Moss has 9 INTs and 13 pass breakups. He also has three career pick-sixes, including two in one game this season.

He'll have a tough matchup today against Jahan Dotson.

Green is a likely first-round prospect who has started at LG, RG, and RT during his career at Texas A&M. He's powerful in the run game, but also nimble in pass protection and getting to the second level of the defense. He'll probably be a guard in the NFL. Here he is in the Orange Bowl last season. It's easy to see him move defensive linemen against their will:

On the downside, Green is thought to need some technical refinement, which shouldn't be an issue as long as Jeff Stoutland remains the Eagles' offensive line coach.

Interior OL help probably won't be on many fans' minds in terms of how to spend early picks in the 2022 NFL Draft, but it's worth noting that the Eagles spend heavy resources on the interior trenches, on both sides of the ball. There's a good chance that both Jason Kelce and Brandon Brooks won't be with the team anymore in 2022, and Isaac Seumalo has struggled staying on the field.

Assuming Landon Dickerson is slated to be the long-term center for the Eagles, they will have another need at guard. It's not sexy, but don't rule it out.