Week 5 NFL picks: Rounding up the experts' predictions for Eagles vs. Panthers 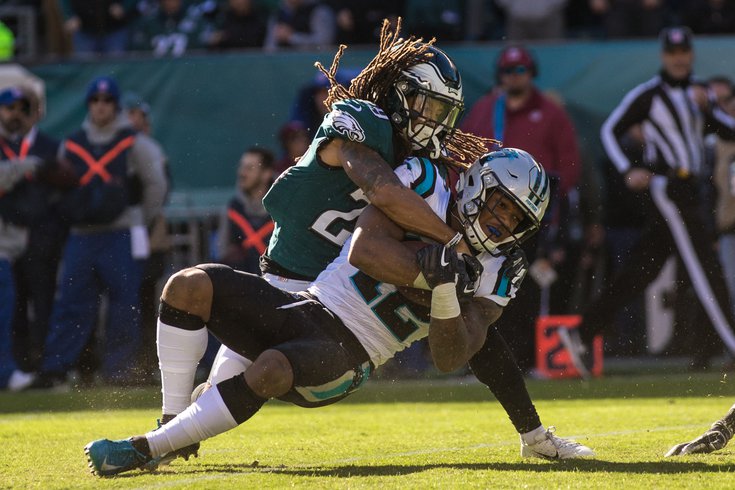 Following a Week 1 win over the Falcons, the Eagles have lost three straight games, the last two of which were by an average of 16 points. On the flip side, both of those losses came against teams expected to be contenders when the postseason rolls around in the Chiefs and Cowboys, while the Eagles, well, no one was expecting them to be contenders heading into the 2021 season.

The Birds will look to snap their three-game skid on Sunday when they visit the Panthers for a 1 p.m. matchup, a game in which Carolina will be without several starters, and will also most likely be missing star running back and best player Christian McCaffrey, who is listed as doubtful with a hamstring injury. The Eagles, who have plenty of injury issues in their own right, will head into this one once again as underdogs, with Carolina currently being favored by three points at most sportsbooks. Interestingly, the line for Eagles vs. Panthers is down a full point from earlier in the week, when Carolina was favored by four points or more at most places.

The lone win for Nick Sirianni's team came against another NFC South opponent in Atlanta, and now they'll face two more teams from the same division in back-to-back weeks, as they'll host the Super Bowl champion Buccaneers on Thursday Night Football next week. But first, it's a date with former Temple coach Matt Rhule and the Panthers. Can they pull off another upset against the same division and start the season 2-0 against South? Or will they return to Philly licking their wounds with just a few days to turn around and prepare for an even tougher matchup against Tom Brady and the Bucs?

As we do every week, we've rounded up numerous predictions from both the local and national media to get a feeling for how the experts see this one playing out. Let's dive right in...

• PhillyVoice staff: After two straight weeks of almost everyone picking against the Birds, we're much more split for Sunday's game against Carolina. Three of our writers are picking the Eagles, but since we typically go with the majority rule here, let's take a look at one of the four writers who are picking the Panthers. Here's Kyle Neubeck...

Let's see, I have a choice between picking the 3-1 home team with a top-five scoring defense or the 1-3 road team with a slightly worse offense (through four weeks, anyway) and a defense that has given up 40+ points each of the last two weeks. Are there any reasons to overthink this?

Well, sure. Wins over the Jets and Texans are not exactly statement victories, and though they hung tougher against the Cowboys than the Eagles did, you'd be within your right to question if the Sam Darnold breakout is real. His performance vs. Dallas could be a sign of things to come against better competition, with Darnold putting up decent numbers that are slightly inflated by extended garbage time stats.

That said, we might as well make it five weeks in a row picking against the Eagles. Christian McCaffrey playing or not might be viewed as an X-factor by some, though Philly's run defense has been so putrid lately that I'm not sure how much it matters. At least Stephon Gilmore isn't available to play for his new team this week, because an interception would have been inevitable after Eagles fans (briefly) clamored for Howie Roseman to go get him.  Panthers 27, Eagles 24

• Inquirer.com: Jeff McLane is the only one of their Eagles beat writers picking the Birds —a 23-20 victory for the road team — but that's not why I'm including his pick in here. No, that's because of the ominous warning that comes at the end of it...

Nick Sirianni, obviously, needs several factors to go his way if he’s to escape Charlotte with his second victory. For one, he needs Christian McCaffrey to not play. The Panthers running back returned to practice this week after missing two games with a hamstring strain, but he’s questionable for Sunday. Sirianni needs his O-line to hold up against a better defensive line, and if tackles Jordan Mailata and Lane Johnson are out another week, that may be easier said than done.

And, thirdly, the Eagles coach needs Jonathan Gannon’s defense to play more like it did in the first two games rather than the latter two. There should be natural improvement going up against quarterback Sam Darnold as opposed to Patrick Mahomes and Dak Prescott. But Darnold has looked better in Joe Brady’s offense than he did with the Jets, and has more weapons (see: receiver D.J. Moore), even if McCaffrey is out.

All told, it’s a lot to ask of the Eagles, but last week’s offensive game plan, and the effort of Jalen Hurts, was encouraging. Sirianni can scheme a competent offense, although his game management and his team have been sloppy. And I’m not selling stock on Gannon yet. He needs to be more creative, but some of his schematic choices are partly forced by Howie Roseman’s multiple personnel errors. I don’t know how much I believe in this pick, but if the Eagles lose, all bets are off.

• NJ.com: It's an even split over at NJ.com, with three of their football writers picking the Eagles and three going with the Panthers. Interestingly enough, both of the Eagles beat writers picked the Birds in this one, including Chris Franklin, who sees a 27-24 win for Philly.

The Eagles offense led by Jalen Hurts took advantage of the underneath routes that the Kansas City Chiefs were giving them. However, the Eagles’ defense could not hold Patrick Mahomes and company, looking especially susceptible to the run.

The Panthers’ offense under Sam Darnold has been efficient but not explosive. With questions surrounding the availability of Panthers running back Christian McCaffrey, the onus of the run game could fall on Chuba Hubbard. Despite their latest struggles, the Eagles are in a position to surprise the Panthers and win this game, with DeVonta Smith having a big game without Jaycee Horn being in the lineup.

• Bleeding Green Nation staff: Five of their seven writers are taking the Eagles.

A return to the field by Eagles left tackle Jordan Mailata and right tackle Lane Johnson would go a long way toward pulling an upset. If the bookends are back, Philadelphia could try to mash Carolina up front like the Cowboys' offensive line did last Sunday. A lot of the Panthers' creative blitz packages are rendered useless if a team is able to run straight at them. Then again, this is a passing league. Carolina coach Matt Rhule is better than Nick Sirianni at scheming players open for his young quarterback, and Sam Darnold is holding up just well enough behind an offensive line that has played a little worse each week.

• ESPN staff: Just one of their 10 experts is taking the Eagles.

The Panthers suffered their first loss last week, but after two straight on the road they return to face an Eagles team that is 1-3. Philadelphia did some good things on offense against the Chiefs, but the defense had issues. Carolina's defense is coming off a tough game at Dallas, but I think they regroup here. It's close, though.

• CBS Sports staff: All eight of their experts are taking the Panthers straight up on Sunday, but three think the Eagles will at least cover the spread.

It’s a get-right weekend for the Panthers, with or without Christian McCaffrey.

The Panthers are a better team than anyone expected, and they’ll cruise against the Eagles.

• USA TODAY Sports staff: All seven of their writers are picking Carolina.

It's hard to back a banged-up team in a free fall, even if the odds may account for that dynamic.

So while laying a field goal and a hook might still not feel right with the Sam Darnold-led Carolina Panthers, the majority of the group is doing exactly that as Carolina hosts a Philadelphia Eagles squad that is 0-3 straight-up and against the spread over the last three weeks.

"Even if star running back Christian McCaffrey can't return from his hamstring injury, Sam Darnold and Co. should be able to put up points on the Eagles' putrid defense, which has surrendered 83 points over the last two weeks," Kenyon said. "This game should remain close, but I'd expect the Panthers to cover 3.5."

For what it's worth, two-thirds of public bettors agree, which aligns with how our pickers see it. But Sobleski has been the second-best predictor of the group thus far, and he isn't willing to lay that hook.

• The Athletic staff: Six of their eight experts* are picking the Panthers. (*This does not include their two Eagles beat writers, Zach Berman and Bo Wulf. Their picks are not up as of this writing.)

• Sheil Kapadia, The Athletic: Sheil picks games against the spread every week, and this week he's not only taking the Eagles to cover, but he thinks they'll win outright.

The Eagles’ offense last week: 30 first downs, 461 yards and 30 points. They drove into Chiefs territory on every possession and didn’t punt the entire game. They had three touchdowns called back for penalties. But overall, Jalen Hurts executed the game plan well, and Nick Sirianni did a good job of scheming up some layups for him.

The Eagles will face a much tougher test against a Panthers defense that got gashed last week against the Cowboys but has played well overall. The same cannot be said for Carolina’s offensive line, which ranks 30th in ESPN’s pass block win rate metric. I think the Eagles’ pass rush gets going in this game, they force a key second-half Sam Darnold turnover, and they pull off the upset.

The Eagles are another NFC East underdog who can pull an upset on the road. Philadelphia has issues against the run, but will the Panthers stick with it long enough? Jalen Hurts spreads out the Panthers’ defense and avoids the big turnover, and Miles Sanders scores the game-winning TD in the fourth quarter.

The Eagles should be better than 1-3. The Panthers are a bit inflated at 3-1. Jalen Hurts has been playing well in passing downfield and running for chunks when needed, but he needs to cut down on mistakes and could use more help from the traditional rushing attack, given Carolina's defense is most vulnerable there. The Cowboys' tight ends caused problems for the Panthers and the Eagles can do the same with Dallas Goedert and Zach Ertz. It comes down to which stout defensive front will control the action vs. two weakened offensive lines. Although Sam Darnold has been a machine rushing for TDs, Hurts' elusiveness gives Philadelphia the edge to escape with victory.