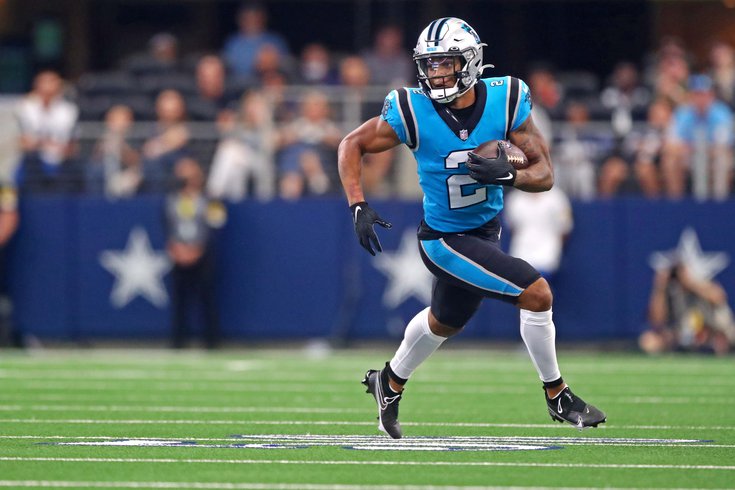 For the gambling enthusiasts, here are my Week 5 NFL picks. To note, the team logos indicate who I think will win the game, not cover the spread. At the end of the picks, I'll note a few teams that I like based on the spread — with all lines coming via Sidelines.io.

Rams (-2.5) at Seahawks: I have major concerns about Sidney Jones potentially starting in this game for the Seahawks, but I like the value of getting 2.5 points with Seattle at home on a short week. Plus, I feel like whenever the Seahawks play in primetime, they're involved in weird, crazy games that go down to the final play. As long as I'm going to watch them, I may as well give myself a rooting interest.

Jets at Falcons (-3): This is the first London game this season, and it's a 9:30 a.m. EST kickoff. I love morning football, but it's too bad that it's the worst matchup on the schedule this week.

Eagles at Panthers (-4): The Panthers are 3-1, but I don't think they're "a 3-1 kind of team," if that makes any sense. It's an average roster with its share of holes. For example, they have four replacement-level players starting along their offensive line, and for now, until newly acquired Stephon Gilmore is ready to play, their personnel at cornerback isn't great.

Unfortunately for the Eagles, they feel ill-equipped to take advantage of the Panthers' deficiencies. Javon Hargrave aside, their defensive line has been a major disappointment throughout he first four games, and they're not yet a team that can consistently burn a depleted secondary all day, as we saw against the 49ers Week 2.

Meanwhile, the Panthers' biggest strength — their edge-rushing duo of Brian Burns and Haason Reddick — could be poised for a big day against an Eagles offensive line that will very likely be without Lane Johnson, and possibly also Jordan Mailata. If Mailata can't go, it'll probably be Andre Dillard at LT and Jack Driscoll at RT, like it was against the Chiefs Week 4. If Mailata can play, the guess here is that Dillard will start at LT, and a gimpy Mailata will flip sides and start at RT. The Eagles' offensive line survived against a depleted Chiefs defensive line, but I don't like their chances quite as much against Burns and Reddick.

The Eagles' secondary will also have to figure out a way to defend the WR duo of D.J. Moore and Robby Anderson, a week after they got roasted all day by Tyreek Hill. I like Moore's chances of having a big day.

Packers (-3) at Bengals: The Bengals got a few extra days of rest after beating the Jaguars at home last Thursday. I was hoping that Cincinnati would be my undervalued, "better than people think" team this year that I could ride for a while, but only being (-3) against a perennial regular season powerhouse like the Packers tells me that the Bengals are being rated properly. My guess is that there will be a lot of action on the Packers at (-3), but I wouldn't touch it.

Lions at Vikings (-9): Yeah, the Lions are 0-4, but at least they've been reasonably competitive. They're not some team that is in any sort of danger of going winless this season. And while the Vikings are better than their 1-3 record would indicate, 9 is a pretty big number. So why is it that high? Well, T.J. Hockenson and Penei Sewell didn't practice on Wednesday, while D'Andre Swift, Jamaal Williams, Trey Flowers, and Michael Brockers were all limited. I'd just stay away.

Broncos at Steelers (-1.5): The Steelers have lost three straight, and by at least two scores in all of them. Ben Roethlisberger looks cooked, and now he also has an injured hip.

The Steelers are favored in this game presumably because Teddy Bridgewater suffered a concussion Week 4 against the Ravens, and his availability is in question. Bridgewater lifted weights on Wednesday, according to the Broncos' team site, and he could be a limited practice participant on Thursday. That's a decent sign for his availability. I'll go ahead and lock in the Broncos at a great value of (+1.5) right now on the hope that Bridgewater can play, which I probably wouldn't do if Drew Lock were definitely starting.

Dolphins at Buccaneers (-10): The Bucs feel like a pretty obvious survivor play, if you haven't already used them. If the season ended today, the Dolphins' 2022 first-round pick, owned by the Eagles, would be fourth overall.

Saints (-1.5) at Football Team: The Saints appear to be this year's roller coaster team that's impossible to get a handle on:

So if the pattern holds this week, they'll be good again again Week 5. #Analysis.

Titans (-4) at Jaguars: Titans (-4) is this week's "Hmmm, that looks too good to be true" line, what with handsy Urban Meyer getting himself into trouble and the Jaguars seemingly in "crisis" mode. I'm not touching it.

Bears at Raiders (-5.5): Hey now, Matt Nagy finally came to his senses and tabbed Justin Fields as his starter the rest of the season. I actually think the Bears will rally behind him, but I just can't trust them with too many good players being held out of practice on Wednesday.

Browns at Chargers (-2): This is great matchup between a pair of evenly-matched teams. I like the Browns juuuust a little bit more, because their defense is playing at an extremely high level, as they have allowed just 302 yards and 13 points in their last two games.

Giants at Cowboys (-7): The Cowboys are good, and the Giants aren't. Next.

49ers at Cardinals (-5.5): The 49ers remain banged up, and susceptible to opposing offenses with quality wide receivers, which the Cardinals have. Arizona will stay undefeated for at least one more week.

Bills at Chiefs (-3): So in the AFC we have Browns-Chargers and Bills-Chiefs this weekend. Not bad! The Chiefs obviously have a juggernaut offense. But, that defense... 😬. The Bills appear to me to be the best team in the NFL through the first four games of the season. They've outscored their last three opponents 118-21. Granted, those opponents were the Dolphins, Football Team, and Texans, but Buffalo is a more complete team right now, dominating on both sides of the ball, while the Chiefs will be forced to win shootouts all season.

Colts at Ravens (-7): I'm guessing that most Eagles fans have not yet sat down and watched a full Colts game with Carson Wentz at quarterback, as their exposure has been limited to sporadic action on the RedZone channel. Monday night will offer the first true uninterrupted look at Wentz with the Colts, and #EaglesTwitter should be fun.