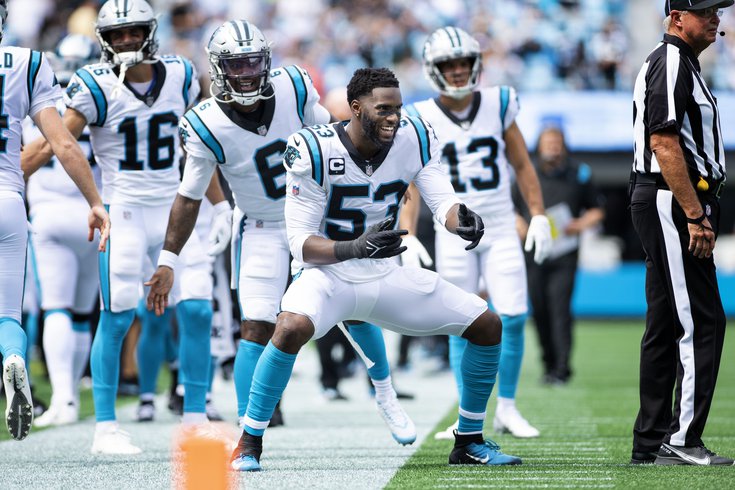 The Philadelphia Eagles will try to prevent their 2021 season from spiraling out of control when they seek to stop a three-game losing streak this Sunday in Charlotte against the Carolina Panthers. Philly is a 4-point underdog, according to Sidelines.io. Here are five matchups to watch.

1) The Panthers' edge rushers vs. (fill in whatever Eagles OT combination you'd like)

Who exactly will start at offensive tackle this week for the Eagles is a mystery.

At LT, Jordan Mailata has missed two games with a sprained knee, and Andre Dillard has filled in. Will Mailata be back this week? He didn't participate in practice at all last week, so that's not a given.

At RT, Lane Johnson's name showed up out of nowhere on the inactive list an hour and a half before the Eagles-Chiefs game last Sunday. The only explanation given was that it was a "personal matter." The Eagles have refused to give any updates since. Against the Chiefs, Jack Driscoll filled in at RT.

The Eagles got away with their instability at offensive tackle against a Cowboys team missing DeMarcus Lawrence and a Chiefs team missing Frank Clark. Barring any surprises, they'll have no such breaks heading into this matchup against the Panthers, who have two explosive edge rushers in Brian Burns and Haasan Reddick.

In his last eight games going back to last season (yes, I know that's an arbitrary timeframe), Reddick has 12 sacks and seven forced fumbles. Against the Eagles last season, when he was still with the Cardinals, Reddick had four tackles, a sack, two forced fumbles, a tackle for loss, and a pressure forced Jalen Hurts into a intentional grounding penalty in the end zone, resulting in a safety. Here are some of his Cardinals highlights:

Meanwhile, Burns is a pure speed rusher whose career is off to a fast start since the Panthers took him in the first round of the 2019 NFL Draft. He already has 19.5 sacks in 35 career games. A sampling:

The Eagles' OTs vs. the Panthers' DEs should be the matchup the Eagles fear the most in this matchup.

2) The Eagles' wide receivers vs. the Panthers' cornerbacks

The Panthers were worried enough about their cornerbacks that they selected Jaycee Horn with the eighth overall pick in the 2021 NFL Draft. When Horn got injured, they felt the need to trade for former Jaguars CB C.J. Henderson.

Donte Jackson is a solid starter on one side. But otherwise, cornerback is a concern area. Henderson got 18 snaps in his debut with the Panthers against the Cowboys. He was targeted once. Here's how that went:

Dak to Amari Cooper for the Touchdown!! pic.twitter.com/Y9A6T4TWtV

Henderson's playing time will presumably ramp up as the Panthers' season progresses. But whether it's him or 32-year-old Rashaan Melvin on the field when the Panthers are in nickel, the Eagles should be looking to test them.

3) Where should the Eagles' defensive line be feastin'?

Each week, we point out the vulnerable spots on the opposing offensive line. Unfortunately, the only Eagles defensive lineman who has done anything so far this season has been Javon Hargrave.

The Eagles' defensive line was supposed to be a strength this season. Instead, it has been a weakness.

Can someone other than Hargrave do something? The Eagles have an opportunity to capitalize against a Panthers offensive line that only has one above average starter in RT Taylor Moton. The other four guys are replacement-level starters.

4) The Eagles' run defense vs. the Panthers' rushing attack

The Eagles may catch a huge break this week, as the Panthers' best player, Christian McCaffrey, could miss this game:

Panthers running back Christian McCaffrey (hamstring) is out today, but he made the trip to Dallas. There's a chance he could return next week but maybe more likely in two weeks. He's on the field going through his stretching routine. https://t.co/exrodVpsUE

McCaffrey injured his hamstring Week 3 against the Texans. He missed the Panthers' Week 4 game in Dallas, but the Panthers did not deem the injury serious enough to put him on injured reserve. Matt Rhule is hopeful McCaffrey can go, via David Newton of ESPN:

It has been the team's belief all along that McCaffrey possibly could return after missing only one game and likely would miss no more than two to three if there is no setback with the injury.

So, we'll see. Whether it's McCaffrey or a combination of Chuba Hubbard and Royce Freeman, Jonathan Gannon must make adjustments to a run defense that has given up the second-most rushing yards in the NFL so far this season:

Asked if there was something he could do schematically to stop the run, Gannon responded, "We always first look at the coaches. You know, when we come in on Monday, critically, how can we help our players a little bit more to put them in better position to win the game.

"I think we're all pissed off about the last two games. We haven't played great on defense. That's evident. And that starts with me and starts with the coaches. So it always comes down to self-evaluation, ‘Hey, what can we do to help our players? What did we say the three things are to win this game? Did we get those three things done?’

"And the last two weeks, we have not done that. So, you look at -- if we get these three things done, are we putting ourselves in a position to win the game? You look at those first. The three things we said, are they the right things?

"Then from there, you look at execution and what we're asking our players to do and how can we help them and serve them better to put them in better spots. And that starts with me, to the coaches, right down to the players."

In other words, Gannon basically didn't say anything specifically about prioritizing a fix of the Eagles' run defense. Inviting the run if McCaffrey is out makes sense, but the Eagles have to be better at, you know, getting them on the ground.

Because they're playing so much zone and two-high safety looks, the Eagles have only allowed 6 pass plays of 20+ yards this season, which is second-best in the NFL. However, opposing offenses have killed them in the short-to-intermediate parts of the field.

Here's a look at the location of Dak Prescott's and Patrick Mahomes' passes against the Eagles. 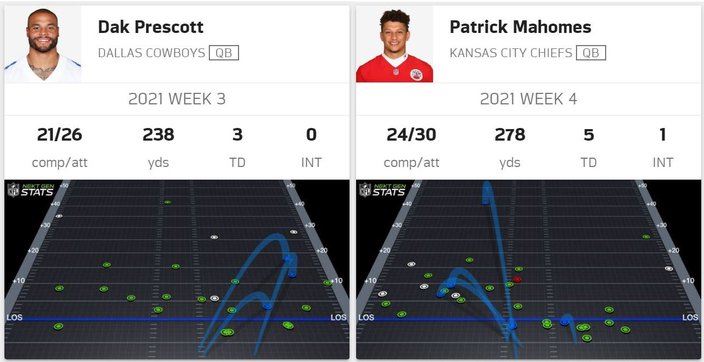 The green dots are completions; the white dots are incompletions. As you can see, Prescott and Mahomes completed a lot of passes and with a high completion percentage 0-20 yards down the field.

D.J. Moore is the Panthers' best receiver. He has speed, he's fearless over the middle, he's very dangerous after the catch, and he lines up all over the formation. In his last two games, he has 16 catches for 239 yards and 2 TDs, mainly working the intermediate parts of the field for Sam Darnold: 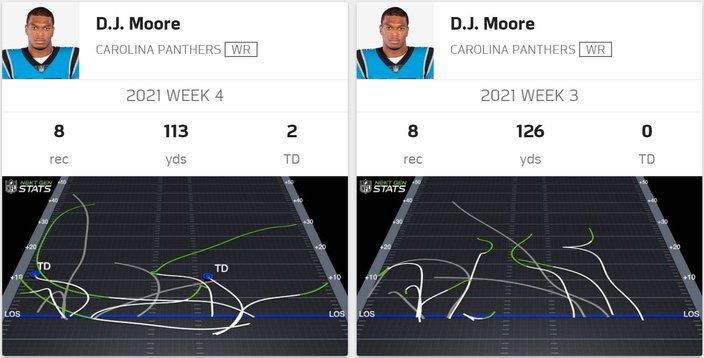 The white lines are completions; the green extensions are the yards after catch. A sampling of his game:

The Eagles cannot afford to have Moore go off like Tyreek Hill did Week 4.