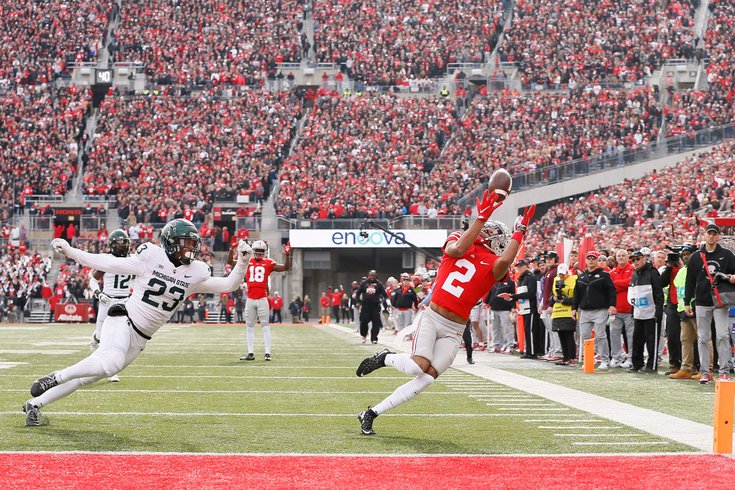 I wouldn't normally advocate for a run stuffing DT in the first round, but Davis is not a player that centers will be able to single block, so he'll at least provide one-on-one matchups across the board against the pass when he's doubled. Against the run, if you plop this dude down in the middle of the line, thus allowing Jonathan Gannon to commit fewer resources toward stopping the run, he would make a lot of sense in the Eagles' defense.

Cine is a big hitter who can fill against the run fast.

Cine is a hunter w/plus play recognition. He is a physical & fearless striker. At his best moving downhill.

He quickly diagnoses & anticipates the cutback by Harris. Remains under control before making the stop. #CRFB 🕵🏾 pic.twitter.com/J0r8lSIZvC

He has also displayed good ball skills in 2021, as he has 8 pass breakups, a very good number for a safety. He would be a natural replacement for Anthony Harris, if the Eagles don't retain Harris in 2022.

Ojabo is inexperienced, as he has only played in 12 career college games. He was born in Nigeria, and moved to Scotland, before heading to the United States for high school.

That makes his breakout season for Michigan all the more impressive, as he has collected 30 tackles, 10 sacks, 5 forced fumbles, and 3 batted passes this season.

Barring unknown concerns, and assuming he performs well at the Combine, he's a lock first round pick.

Like DeVonta Smith, Olave has a slight build, he is an excellent route runner, and he makes difficult catches look easy, though he does not possess Smith's contested catch traits. He is more of a deep threat than Smith, however, as he has good speed and ball-tracking ability. He won't remind anyone of Deebo Samuel or A.J. Brown in the run after catch department.

I was slow to profile Olave this season because he is similar in many ways to Smith, but after consideration, I don't see the harm in having two skinny guys who create a ton of separation and make life easier for their quarterback.

Harris played some safety, cornerback, and wide receiver in high school, but you'd never know it by how violent of a linebacker he is:

Harris is a tone setter in Bama's defense, with the athleticism to run sideline to sideline in the run game, and the ability to get to wide areas of the field in coverage. Think T.J. Edwards, but with Davion Taylor's speed.