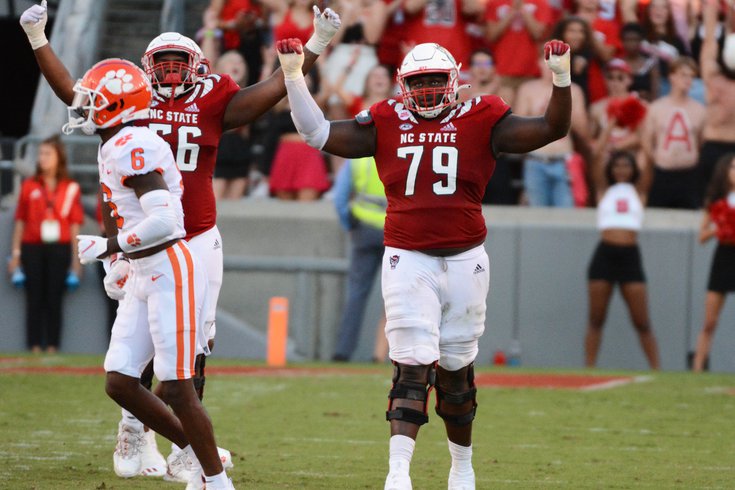 NC State offensive lineman Ikem Ekwonu is one of my favorite prospects for the 2022 NFL Draft.

As a redshirt freshman in 2020, Joseph picked off six passes in eight games. Here are all six, including an incredible one-handed pick while covering likely 2022 first-round pick Garrett Wilson man-to-man in the red zone:

Joseph is highly intelligent both on the field and off of it, as he was recruited by Harvard, Penn, Yale, Dartmouth, Columbia, and Cornell, among other schools known more for their academics than their football programs.

He's an instinctive safety with deep zone coverage chops, which should translate well to what Jonathan Gannon asks of his safeties.

Karlaftis is a power rusher and a high-effort, violent player who had 54 tackles (17 for loss) and 7.5 sacks as a true freshman in 2019. He only played two games during an already abbreviated season 2020 due to a COVID contraction and other injuries. He finished with two sacks. In 2021, Karlaftis has 1.5 sacks in five games, with two forced fumbles and four batted passes. A look:

When Brandon Graham went down for the season with an Achilles tear, his contributions were immediately missed. Karlaftis is a first-round prospect who could play in Graham's role along the Eagles' defensive line.

Emerson is an under-the-radar cornerback prospect, who had 72 tackles and 11 pass breakups in 11 games in 2020. He is big and physical at 6'2, 200 pounds, and is beginning to get some attention as a potential Day 2 pick in the 2022 NFL Draft, and possibly even Day 1. He'll have a challenging matchup against Alabama's talented receivers.

The Eagles have a clear need for more youth at cornerback. Had Jaycee Horn — a player with similar traits as Emerson — still been available when the Eagles were picking in the 2021 draft, they'd have probably chosen him over DeVonta Smith.

Ekwonu is a powerful, nasty lineman with experience both at LT and LG. In the NFL, while he has the athleticism to play on the edge, he'll likely play on the interior where he can move defensive linemen against their will.

An excerpt from a piece on Ekwonu from The Athletic:

“To me, he’s the most feared offensive lineman in the ACC,” said an offensive line coach in the conference. “He’s similar to Mekhi Becton but more of an interior guy. He’s got so much short-area power and explosiveness. He’s violent. You’d go watch him on film: ‘Oh, wow, he’s destroying people.’ He’s got something in him that is not coached. There is some natural aggression and ferocity with the way he finishes and strikes. That is a gift.”

Here's a quick taste of what he did against Clemson this season:

NC State OT Ikem Ekwonu (6040, 320, Jr.) has been impressive so far this season. Ridiculous strength levels, athleticism, and urge to finish. Showed it all vs. Clemson. Reminds me a lot of Kelechi Osemele coming out of Iowa State. pic.twitter.com/E4ur1ZosWe

With Jason Kelce and Brandon Brooks both likely playing their final seasons in Philly, the Eagles will need more interior offensive linemen, even after taking Landon Dickerson with a high second-round pick in the 2021 draft.

He's a bigger back at 6'1, 220, and his standout trait is something that many would argue Miles Sanders lacks — vision. Hall's physical skill set (size, speed, and ability to change direction) are all fine and good, but he is a savvy, patient runner who knows how to set up blocks and weave his way through traffic.

Hall is probably a second-round prospect. The Eagles would obviously only take a player like him if they had no intentions of giving Sanders a second contract, but he is a back who could potentially start immediately, and who would form a good, young 1-2 combo with Kenny Gainwell.