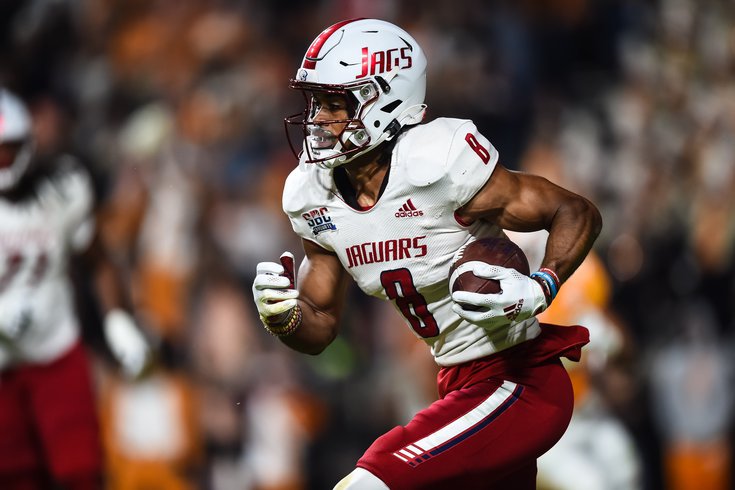 The Eagles could still use a speed receiver like South Alabama's Jalen Tolbert.

This week, with just the Army-Navy game on the slate, we'll profile five small school guys.

Tolbert will have something of a home field advantage at the Senior Bowl, which is being held at South Alabama's facilities.

The Eagles could still use a deep threat, as Jalen Reagor hasn't come close to proving he can be that guy, and Quez Watkins has only made a handful of plays down the field. Tolbert could sneak into the Day 2 conversation with a strong showing in Mobile.

Penning is easily the best FCS prospect in the country this year. He has ideal size at 6'7, 321, with good enough athleticism, and a strong anchor. But what makes him so fun to watch is how nasty he is.

Does he look to finish you every chance he gets? Yep.

Is he going to give you the last shove? Yep.

Will he try to dump you over the pile? Yep.

Will he drop the groceries on you? Yep. pic.twitter.com/zptxztsULX

If you're the Eagles, you're probably not spending a first-round pick on an offensive tackle with the way that Lane Johnson has played this season, but this is a name you should probably know because some team is going to fall in love and draft him in the first round, and possibly even early in Round 1.

Jones has ideal length for an NFL offensive tackle at 6'7, reportedly with 35" arms. He's an easy mover with good feet and agility who is willing to finish blocks. A look at his game against San Jose State this season:

Jordan Mailata will be in place at LT for the foreseeable future, and as noted above, Lane Johnson is having a very good season at RT. They also have one more year of Andre Dillard, but the team should be looking to move him for draft capital.

The Eagles' line could use a developmental guy who can be a swing tackle off the bench in the short-term, and a potential starter down the line. Jones is a guy who brings out of the box physical skills that Jeff Stoutland can mold over time.

Chambers initially enrolled at TCU (he never played any games there), but transferred to Houston to take care of his sick aunt who raised him after both of his parents died. When Houston changed over its coaching staff and often had Chambers on the third string even though he was productive whenever he played, he transferred again to McNeese State.

It'll be interesting to see if Chambers gets college all-star love, such as an invite to the Senior Bowl, and how he performs at the NFL Combine, assuming he's a participant. I think he's a late-round sleeper.

A couple weeks ago, we profiled massive Georgia run stuffing defensive tackle Jordan Davis, on the premise that if you plop him down in the middle of the line, it would perhaps allow Jonathan Gannon to commit fewer resources toward stopping the run and allow more creativity in defending the pass on the back end, or getting after the quarterback.

However, Davis could be a first-round pick, so maybe that's not the best use of resources. A similar player who can be had later is Jones, a 6'4 333-pound DT for UConn (not exactly a "small school" exactly, but whatever).

Jones will compete at the Senior Bowl in January.