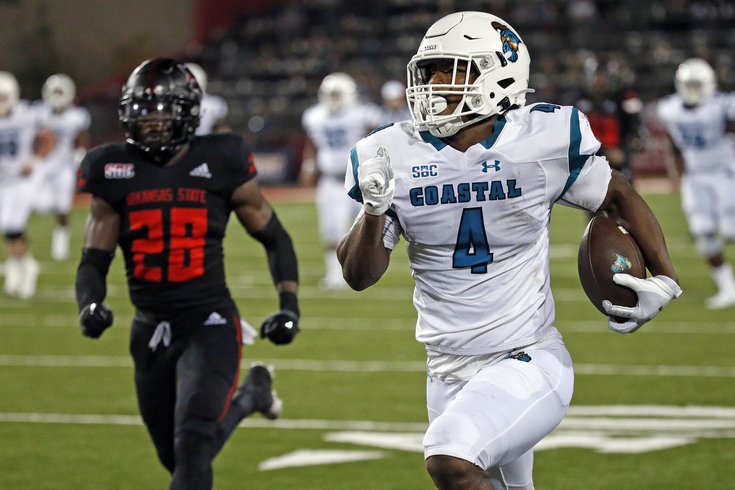 Isaiah Likely had a very impressive yards per catch average at Coastal Carolina.

To begin, we should note that this game was already played Friday night, as was the Coastal Carolina game below, but we had to attend to the NFL's postponement of the Eagles-Washington game, so whatever.

Blankenship is a player we profiled early in the season last year, so he's a guy from a small school who has been on the radar for a while. He played five seasons at MTSU. His first three were highlighted by his takeaway numbers (8 INTs), while his last two were noteworthy for his high number of tackles (186 of them in 22 games).

The Eagles have some obvious needs at safety, and Blankenship feels like a late-round type of player who can contribute immediately on special teams and grow into a role in the regular defense.

Likely had a pair of very productive seasons to close his college career, and some ridiculous yards per catch averages from a tight end.

Likely finished second in the nation among tight ends in 2021 in receiving yards, and touchdowns. A look:

The Eagles now have Dallas Goedert under contract through 2025, but beyond him they have a pair of players in Jack Stoll and Tyree Jackson who have a combined four targets this season (all by Stoll). While Stoll and Jackson are worth developing, the Eagles shouldn't turn down a tight end in the draft if the right value is there.

Jackson put up huge numbers in 2021, making 114 tackles (19.5 for loss), 6 sacks, 1 INT, 1 FF, and 5 pass breakups. He is an instinctive, tough player against the run, though as noted here, despite the aforementioned 5 pass breakups in 2021, is more of a run down linebacker at this point. Think T.J. Edwards, with more athleticism.

D'Marco Jackson w/ a form, absolute snot bubble tackle again, for a loss. Seems to be a very reliable two-down IB. Not asked to cover much. I guarantee they want to see that in Mobile. pic.twitter.com/tWIE4Etg2v

The Eagles would prefer a linebacker with out of the box coverage ability, but Jackson has the speed to be able to do it. He could perhaps be a player they bring along slowly, and I wonder if they might look at a prospect like Jackson as a possible occasional fit at the SAM position, because he has some pass rushing chops.

Zappe had video game production in 2021, throwing for 5,545 yards for Western Kentucky. The next closest quarterback (Will Rogers, MSU) had 4,449 passing yards. He needs 338 yards to pass B. J. Symons for the NCAA single season passing yards record. Symons threw for 5,833 yards in 2003 for Texas Tech.

This was Zappe's only season at the FBS level. He transferred from Houston Baptist, where he also put up monster numbers.

Zappe kinda gives me some Gardner Minshew vibes. He has a similar build, and because of physical limitations (arm strength, athleticism, etc.), his ceiling is low, but he knows how to play the position and has squeezed the most out of his talent.

A week ago, there was some talk that Minshew could generate some trade interest this offseason, and Zappe would make some sense as an ideal backup on a four-year rookie contract, replacing one with only one year left.

In case you missed the theme this week, we're profiling a bunch of super productive small school guys. Malone is an undersized, but very productive pass rusher for WKU.

In 13 games this season, Malone has 88 tackles (16.5 for loss), 7 sacks, and 4 forced fumbles. Over the last three seasons, he has 24 sacks. Here's how his production compares to Eagles 2021 seventh-round pick Patrick Johnson's last three seasons at Tulane:

You can see Malone's explosiveness here:

DeAngelo Malone does a great job winning wide. After shedding the OL, he flattens his angle & runs the line.

The closing burst to hammer the QB & force the fumble 🔥🔥🔥 pic.twitter.com/EEM7STyUEV

I like Malone as a similar SAM project as Johnson, but with more upside.