Construction in sight for casino near Philly's Sports Complex 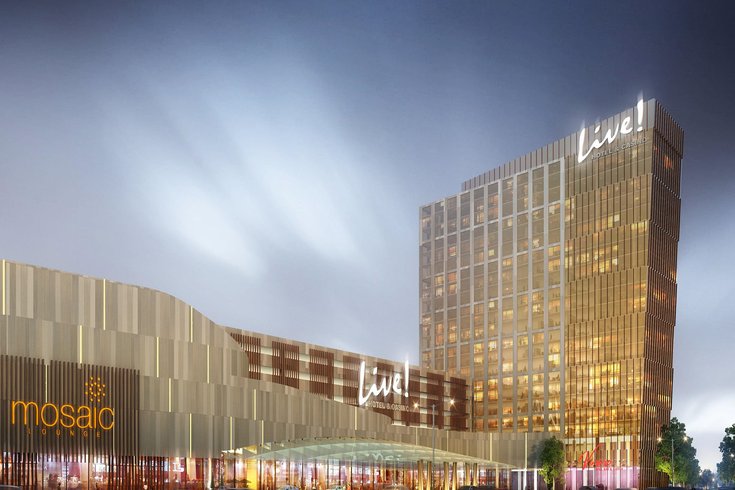 A rendering of the Live! Hotel and Casino proposed for South Philadelphia.

A long-delayed casino planned near the South Philadelphia Sports Complex looks set for construction in the coming year.

The operator of SugarHouse Casino in Fishtown, the lone casino within Philly's limits, dropped its court appeal against the proposed Live! Hotel and Casino on Monday, according to multiple reports.

SugarHouse HSP Gaming reportedly gave up on the effort after Gov. Tom Wolf signed a bill repealing the ownership restriction on casinos. Philly.com reported that the company's lawyers said in a court petition that the legislation renders their objections to Stadium Casino's license "moot."


After Stadium Casino LLC was awarded the city's second casino license in 2014, SugarHouse and Market East Associates, one of three unsuccessful bidders, appealed the decision.

After the board affirmed the decision in August, SugarHouse had asked the state Supreme Court to overturn the order.

The appeal had been the latest roadblock holding up the project's development.

Despite delays, court appeals and strong opposition from some neighborhood groups, construction is reportedly set to start in 2018 with a planned opening in 2020.

The $600 million complex would be built on the current site of the Holiday Inn on Ninth Street and Packer Avenue, close to Citizens Bank Park. It would include a boutique hotel with more than 200 rooms, a 2,600-space parking garage, restaurants and live entertainment venues.

The complex's developer, Stadium Casino LLC, is reportedly a partnership between Cordish Companies and Greenwood Racing, Inc, which owns the controlling stake in Parx Casino in Bensalem.

Cordish Companies is the same developer behind the Xfinity Live! entertainment and dining venue at the stadium complex. Its website touts the project's proposed location as being "in the heart of the Stadium District in South Philadelphia."

"The project will create the first comprehensive gaming, resort, entertainment and sports destination in the United States, making it a true regional destination," the site states.