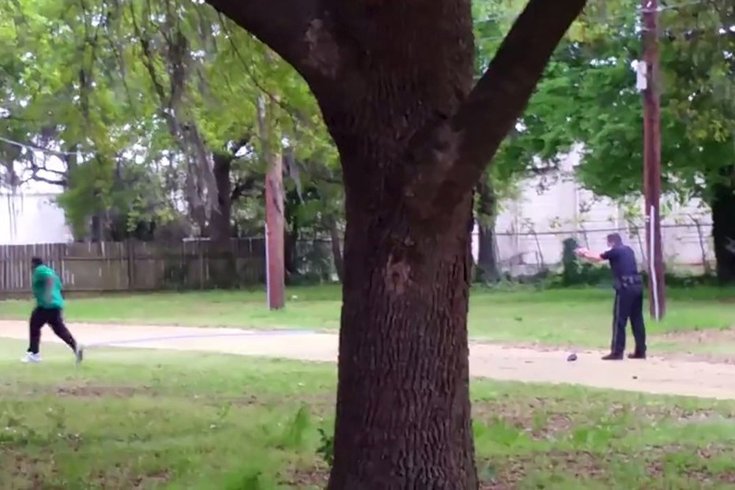 North Charleston police officer Michael Slager (R) is seen allegedly shooting 50-year-old Walter Scott in the back as he runs away, in this still image from video in North Charleston, South Carolina taken April 4, 2015.

According to the Courier-Post, Michael Slager, 33, attended Lenape Regional High School in Medford, Burlington County, as indicated on a job application released Wednesday by the city of North Charleston. Slager also worked as a waiter in Voorhees prior to leaving South Jersey in 2003 to join the Coast Guard.
According to the Burlington County Times, Slager was a 2001 graduate. Slager reportedly lived in Mount Laurel with his family at the time.
In 2009, Slager applied for the police position after six years of military service.
The case out of North Charleston has garnered national attention following the release of video evidence that allegedly shows Slager shooting Scott, a black man, in the back as he fled from a traffic stop.
The incident was recorded by a man identified by NBC News as Feidin Santana. In an interview with the network, he said Scott had been hit by the officer's stun gun before he fled to avoid further stun gun fire.
The video, which Santana said he gave to Scott's family, shows a brief scuffle between Scott and Slager, before Scott runs. Slager is then seen taking aim with a handgun before shooting eight times at Scott's back.
"He made a bad decision," Santana said of the officer. "You pay for your decisions in this life. I think Mr. Scott didn't deserve this."
The shooting was the latest in a series of deaths during police encounters in the United States that have led protesters to decry racism and police brutality.
North Charleston Police Chief Eddie Driggers said at a news conference that he did not know whether officers had performed cardiopulmonary resuscitation on Scott, who had been stopped by police for a broken brake light on his vehicle.
With Scott slumped facedown on grass, Slager is seen placing him in handcuffs and then walking back to a spot near where he opened fire. The video then shows him appearing to pick something up, return to Scott, and drop it next to him.
Driggers and North Charleston Mayor Keith Summey did not answer a question about the object.
"There are questions that I have in my mind that I can't answer right now," Driggers said. No other officers have been disciplined, officials said.
According to a police report, Slager told other officers that Scott had taken his stun gun from him. At no point in the video, which does not show the initial contact between the men, does Scott appear to be armed.
Summey said that the full video had not been made available to him. He said there is additional footage from a patrol car camera.
The mayor said Slager had been fired but said the city would cover insurance for his family until his Slager's wife, who is eight months pregnant, gives birth.
Summey said the city's police force will soon be equipped with body cameras.

DEBATE ON POLICE AND RACE

Slager was charged on Tuesday with murder in a shooting reminiscent of several deaths of black men over the past year in cities including New York; Ferguson, Missouri; and Cleveland, Ohio.
The shootings have stirred debate across the country about police conduct and race relations, also drawing into the discussion President Barack Obama, who an aide said has seen the Scott video.
The Federal Bureau of Investigation and the U.S. Department of Justice are investigating Scott's shooting, which has drawn strong reaction from political leaders and on social media.
South Carolina Governor Nikki Haley, along with U.S. Senators Lindsey Graham and Tim Scott, all Republicans, decried the shooting, with both senators releasing statements calling the video "horrific."
Civil rights leaders called for calm, with many on social media, where #WalterScott was a trending topic, praising the witness who filmed the shooting and gave the video to Scott's family.
Holding signs that read "The whole world is watching" and "Back turned, don't shoot," protesters in front of North Charleston's city hall said Scott's death should not be viewed as an isolated incident.
About two miles away, in the oak tree-studded park where Scott was killed, a makeshift memorial had been erected, comprising a small white cross, two bouquets of plastic flowers and a half-dozen votive candles.
The shooting was the 11th involving a police officer in South Carolina this year and the second in North Charleston, said Thom Berry, spokesman for the state's law enforcement division. No one was injured in the prior incident in January, he said.
Chris Stewart, an attorney for the Scott family, said they plan to sue.
North Charleston, which has a 2015 budget of $105.6 million, about one-third of which goes to the police department, could end up paying out a significant amount to Scott’s family, according to legal experts.
"The municipality is going to be on the hook for seven or eight figures," said Mark Geragos, a criminal defense lawyer. "The last thing they’re going to want to do is put this in front of a jury."
Slager, who like Scott is a former member of the Coast Guard, was accused by a man of shooting him with a stun gun without cause in 2013, but was cleared of wrongdoing in an internal investigation. Last year, he was found to have failed to fill out an incident report, records show.
Reuters contributed to this report.