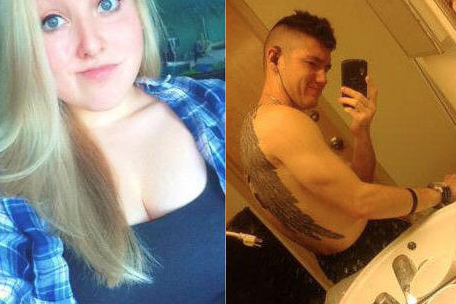 Read More
In a chilling case out of Lehigh County, the stabbing death of a 54-year-old women may trace back to a series of alleged text messages sent by her teen daughter to a boyfriend in the military.
Prosecutors are charging 14-year-old Jamie Silvonek and her 20-year-old boyfriend, Caleb Barnes, in the death of Cheryl Sylvonek, whose body was found on March 15 with multiple stab wounds to the head, neck and torso, the Huffington Post reports.
According to a probable cause affidavit, the killing stemmed from an argument between Cheryl Sylvonek and her daughter about whether she would be allowed to date Barnes, who was on a weekend leave from Fort Meade in Maryland.
Barnes allegedly thought that Jamie Silvonek was 17 years old, while she in turn was attempting to convince her mother that Barnes was 16 years old, not 20. The two had made plans to attend a Breaking Benjamin concert together, but when Jamie's mother initially refused to give them a ride, police say they plotted to kill her.
Text messages released from confiscated phones point to the eighth-grader urging Barnes to kill her mother.
"She needs to go, Caleb," Jamie texted on the afternoon of March 14. "Right now. You don't understand."
After Cheryl Silvonek sent Barnes an image of Jamie's passport, revealing her true age, Jamie unleashed a stream of texts to Barnes that prosecutors say are proof the two plotted to kill the woman.
"She threatened to throw me out of the house. I want her gone," read another of Jamie's texts, along with a third pressing Barnes even further: 'JUST DO IT.'
Cheryl Silvonek eventually changed her mind and agreed to drive them to the concert. When they returned that night, police say an argument broke out in Silvonek's car and Barnes attacked her, stabbing her repeatedly with Jamie present.
The pair are alleged to have driven Silvonek's body to a forested area nearby and buried it in "loosely packed dirt and snow." Police were alerted by a neighbor across the street who spotted the suspicious scene.
According to Reuters, Jamie's father was asleep at home and was unaware of the death of his wife.
Police said that Caleb Barnes has admitted to the killing, while Jamie initially stated that she had last seen her mother leave to shop for groceries on the afternoon of March 14. Silvonek, who turned 14 in February, meets the minimum age in Pennsylvania to be tried as an adult for murder. Both she and Barnes have been charged with homicide and conspiracy.