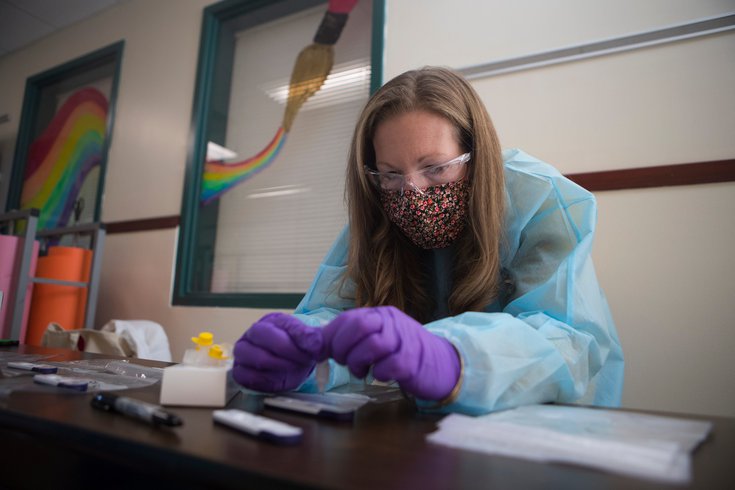 The Delta variant accounts for 83% of new coronavirus cases in America, CDC Director Dr Rochelle Walensky says. Above, a coronavirus test strip is prepared inside a Wilmington, Delaware, classroom.

The number of new COVID-19 cases caused by the highly contagious Delta variant has increased dramatically since the beginning of July, the director of the U.S. Centers for Disease Control and Prevention said Tuesday.

Dr. Rochelle Walensky told a U.S. Senate committee that the variant now accounts for 83% of new cases in the United States, according to CNN. That's up from 50% for the week of July 3.

"It's twice as infectious," said Andy Slavitt, a former senior advisor to President Joe Biden's COVID Response Team, per CNN's report. "Fortunately, unlike 2020, we actually have a tool that stops the Delta variant in its tracks: It's called vaccine."

Vaccination rates, however, have slowed significantly since doses were first made available to the public. Of America's eligible population (ages 12 and older), only 56.9% are fully vaccinated, according to CDC data.

Philadelphia, where 60.4% adults are fully vaccinated and 73.5% have received at least one dose, is averaging 56 new cases of COVID-19 per day over the last two weeks, according to the Department of Public Health. Acting Health Commissioner Dr. Cheryl Bettigole on Monday did not specify how many of those new cases were the Delta variant but attributed "a small, but real increase" in the city's caseload to it.

"Our relatively high vaccination rates will help to protect us, with more than three-quarters of a million Philadelphians fully vaccinated, and the fact that our relatively high rates are consistent for adults 45 and over across racial and ethnic groups is encouraging," Bettigole said. "But that does nothing to protect those who have not been fully vaccinated, including children who are too young to be vaccinated.

"The best thing you can do to protect your loved ones is to get vaccinated – and get your second dose as soon as you're eligible."

Over the past week, Pennsylvania reported 996 new COVID-19 cases statewide, according to the Department of Health. As of Monday, 61.9% of Pennsylvanians ages 18 and older were fully vaccinated, the CDC said. Comparing the state's COVID-19 dashboard with its vaccine dashboard shows that counties with lower vaccination rates are among the highest in cases per 100,000 residents.

Health officials in New Jersey reported on July 12 that the Delta variant was the most predominant in the state, according to NJ.com. The variant caused 41% of the state's new cases in June, data show.