Could COVID-19 vaccine hesitancy derail a postseason push for the Phillies? 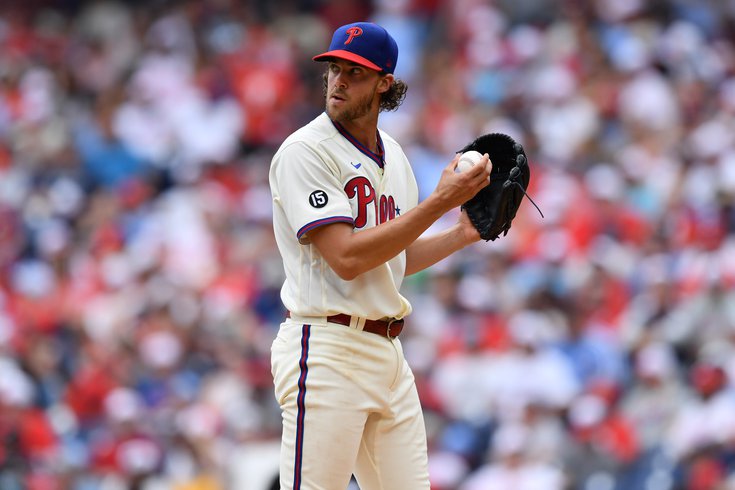 Starting pitcher Aaron Nola is one of several Phillies players who remains unvaccinated against COVID-19.

Believe it or not, the Phillies currently find themselves with a golden opportunity to snap their decade-long postseason drought this year.

With exactly 70 games remaining over the next two-plus months, the Phillies are in second place and just 2.5 games behind the banged-up New York Mets for first place in the National League East. The Phillies haven't won the division since 2011, and they seem poised to be aggressive at the July 30 trade deadline in order to improve the roster.

But in classic Phillies fashion, the team seems to always find ways to make things more difficult for themselves than they need to be. And it appears that the team's hesitancy to get vaccinated against COVID-19 could end up derailing a late-season playoff push.

Nearly half of the Phillies' 26-man active roster has refused to get vaccinated against COVID-19, according to the Inquirer, leaving ownership and the front office reportedly "terrified" and "exasperated" that another coronavirus outbreak could keep the Phillies from playing October baseball.

The news that so many players remain unvaccinated against COVID-19 comes as the highly-contagious Delta variant continues to spread across the country, leading to rising infections, hospitalizations and deaths among those who are not vaccinated.

COVID-19 vaccinations are not mandatory for players and coaches in MLB. However, if 85% of a team's players, coaches and clubhouse staff is fully vaccinated, they are eligible to enjoy relaxed COVID-19 health and safety protocols.

But the Phillies are one of seven MLB teams that remain below the 85% threshold. They seem unlikely to reach that number this year, a stance that was all-but signaled earlier this month by manager Joe Girardi.

"I don’t think you can demand that players do it,” Girardi said. “I think it’s a personal choice. And you have to deal with it. That’s all. I mean, you’re going to have little things like this pop up probably more often than teams that are vaccinated. You just pray that they’re either false positive, or the guys that are nearby don’t get it. I mean, that’s your prayer. But, in the meantime, sometimes you have to lose players that don’t necessarily have it. And that’s the frustrating part.”

With so many players choosing not to get vaccinated against COVID-19, the Phillies are left at a competitive disadvantage. If another COVID-19 outbreak occurs again within the clubhouse, it could easily derail a pennant race or playoff series. And MLB will not slow down or stop for a team that has an outbreak at this point with COVID-19 vaccines widely available to players.

That competitive disadvantage has already been felt this season by the Phillies, albeit not to its fullest extent.

Third basemen Alec Bohm tested positive earlier this month while the Phillies were in Boston facing the Red Sox, prompting three other players — starter Aaron Nola and relievers Connor Brogdon and Bailey Falter — to go into quarantine and onto the COVID-19 list as close contacts.

All four players were not vaccinated. Falter and Brogdon returned to the team this past weekend. Nola had to miss two starts and will be on the mound Tuesday night in the Bronx when the Phillies open a two-game set against the Yankees. Bohm is expected to return Wednesday night at Yankee Stadium.

Given the timing of the outbreak around the All-Star break, the Phillies somewhat dodged a bullet. But if something similar were to occur later this year, it could throw a total wrench into the playoff race.

Nevertheless, some Phillies have no plans to get vaccinated anytime soon, leaving ownership and the front office reportedly "distraught" that the clubhouse has shown "such meager" leadership on the matter.

“I don’t think it motivates anybody. It’s a personal choice,” Nola, who now hasn't pitched in two weeks, said Friday, adding that despite this recent scare he still doesn't plan on getting vaccinated. “I’ll leave it at that. I don’t know what other guys are doing. I think you just have to be careful.”

Opposition by many in the Phillies clubhouse to getting vaccinated has been motivated by a number of "influential" players, according to The Athletic. Some have cited achieving herd immunity through already having contracted COVID-19 and developing antibodies as enough protection against the virus.

Veterans like relievers Brandon Kintzler and Archie Bradley, as well as shortstop Didi Gregorius, have blamed injuries on COVID-19 vaccine side effects.

The Phillies weathered an outbreak at their spring training facility in Clearwater, Florida last summer. They had eight players and coaches sidelined in April due to the league's COVID-19 health and safety protocols.

Having four players sidelined due to COVID-19 this month hasn't cut into the Phillies' recent momentum. But another outbreak could prove costly to a team that has its sights set on hosting playoff games at Citizens Bank Park this fall.