Alec Bohm, who was pulled from Saturday's win at Boston, tested positive for the virus, according to Joe Girardi 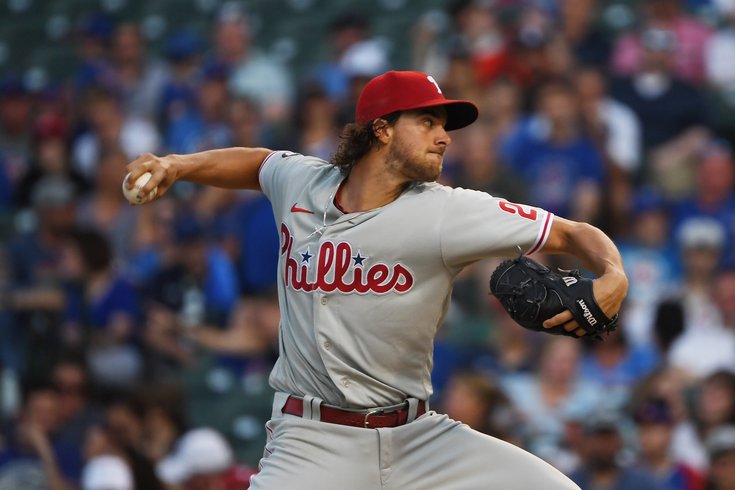 Aaron Nola was supposed to take the mound Sunday at Fenway Park but was among four players placed on the COVID-19 list after infielder Alec Bohm tested positive for the virus.

Aaron Nola was slated to take the mound Sunday afternoon at Fenway Park with the Philadelphia Phillies looking to close out the first half of the season by claiming a series victory over the Red Sox and moving to .500 on the year. That changed when Alec Bohm tested positive for COVID-19.

After a wild 12 hours, Brandon Kintzler made his first start of the season and surrendered a home run to Xander Bogarts in the bottom of the second inning of the Phillies' final game before the All-Star break. Nola joined Bohm and relievers Connor Brogdon and Bailey Falter on the coronavirus list due to contact tracing, the team announced Sunday morning. Bohm will be sidelined for at least 10 days, while the status of the other players remains unclear, according to Matt Gelb of The Athletic.

To fill the roster vacancies, the Phillies called up lefties Damon Jones and Cristopher Sánchez, right-hander Mauricio Llovera and infielder Nick Maton from Lehigh Valley. They arrived in Boston at 9 a.m. Sunday after a 306-mile journey from Allentown, according to Gelb.

Manager Joe Girardi knew his team might need extra players when Bohm was pulled from an 11-2 victory over Boston on Saturday, Gelb tweeted Sunday. Bohm had two hits, including a two-run homer in the second inning, but was replaced by Didi Gregorius in the top of the eighth. After the game, Girardi told reporters that Bohm was pulled from the game due to COVID-19 protocols.

Philadelphia is among a handful of teams that have not yet reached the MLB's 85% threshold of fully vaccinated Tier 1 individuals, which comprises players, coaches and clubhouse staff, Todd Zolecki with MLB.com said. Teams that reach the 85% threshold enjoy relaxed safety protocols, and fully vaccinated players do not have to undergo contact tracing.

"Fortunately for (Philadelphia), this is happening just before the four-day All-Star break, so there is a chance that Nola, Brogdon and Falter will not miss much time," Zolecki wrote Sunday morning. "Of course, losing Nola on Sunday is a considerable blow following short starts from Vince Velasquez on Friday and Matt Moore on Saturday."

The Phillies entered Sunday's game against Boston with a 43-44 record. They are in third place in the National League East and trail the division-leading New York Mets by 4.5 games. After the All-Star break, the club will host the Miami Marlins for four games before making a short road trip to Yankee Stadium for a two-game set.