Kevin Cooney: What we have (and haven't) learned about Phillies as season nears halfway point 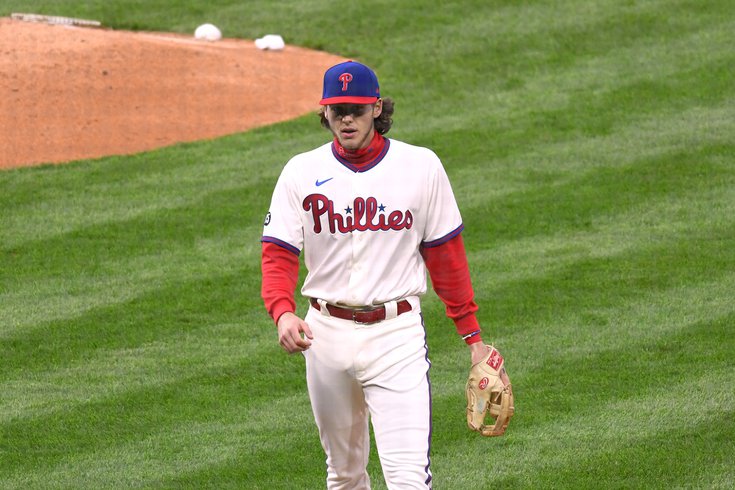 Alec Bohm has been a liability at third base for the Phillies.

If the weather holds out, the Phillies season will be halfway over around the time the steak on the old gas grill churns out some majestic sear marks on Saturday night with the conclusion of Game 81.

The fact that we don’t know any more about this team than we did on Opening Day, however, is deeply concerning to say the least.

Halfway home. And if this was a normal division, they would already be done thanks in large part to the worst defensive effort that a Phillies team has produced in a generation and a bullpen that has gone from historically bad in 2020 to impossible to watch in 2021.

And yet, that last part is the key. They aren’t done yet. Despite being three games under .500 at 37-40, the Phillies are still just five behind the Mets in the division race and just six behind in the loss column.

So as we hit the halfway point, what do we know about this team? Well, let’s take it bullet point by bullet point:

• The starting pitching is good enough to get you to the playoffs right now.

You can have the whole “Aaron Nola is an ace” argument all you want. And there are times when Zach Eflin can get a little off track. However, the basic fact remains is that at least four days out of five – Philadelphia will get effective enough starting pitching to contend. What Zack Wheeler has done is nothing short of remarkable and in a normal non-Jacob deGrom season, he would be getting some serious Cy Young looks.

• The bullpen really didn’t get that much better, after all.

When the season began, the belief was that Archie Bradley would be the closer with Hector Neris sliding into an eighth inning role. But Bradley got hurt early, his velocity didn’t ever really get cranked back up to necessary levels and the Phillies' ninth innings have been a constant Groundhog Day with 21 blown saves. The passing on Brad Hand — who has been good for Washington — is looking more and more like a major mistake.

• The Bryce Harper injuries are worrisome

Getting hit in the face and wrist are fluky things that you can’t chalk up to injury worries for a guy who has 10 years left on a mega-contract. The back? Well, that’s a different story. The concern is backs don’t usually get better as you get older. Throw in the shoulder that seems to occasionally pop up as an issue as well and it is certainly a concern given the length of that contract.

• You can’t really play Alec Bohm and Rhys Hoskins in the field together anymore.

Call it the "Not Corners." Both of them are just such liabilities in this setting that any attempt to play them long term together at those spots is not going to work. The offensive production can not outweigh the defensive issues. Now, if a designated hitter comes into the National League next season, you can try to keep both in the lineup. But at this rate, having both together in the field is a recipe for continued frustration.

• Joe Girardi has been a real disappointment

The roster issues are real and they are spectacular. But let’s also be honest: Girardi’s management style that was once a symbol of how to be a steady contender — especially in the bullpen — has fallen tremendously short. What has been incredibly odd has been the concept that Girardi seems so tightly wound for a manager who would seemingly have job security. From the bizarre “competitive advantage” line when it came to player status to that “what was that?” third check of Max Scherzer last week, Girardi seems a combination of beaten down and up tight. For this team to get to where it wants to go, he has to get significantly better in the dugout.

Yes, the trade deadline is always critical in every season. But what the Phillies have working against them is clock of interest. Even if the Eagles are not going to be very good, they are still going to grab all the oxygen in town once training camp gets going. Once the NBA Finals are over and the Draft comes up, whatever happens with Ben Simmons will be the second biggest story in town. Add all of this together and you have a point of no return for this team in the eyes of the public. If they aren’t closer than five games at the end of July, there could be tumbleweeds at the northeast corner of 11th and Pattison.