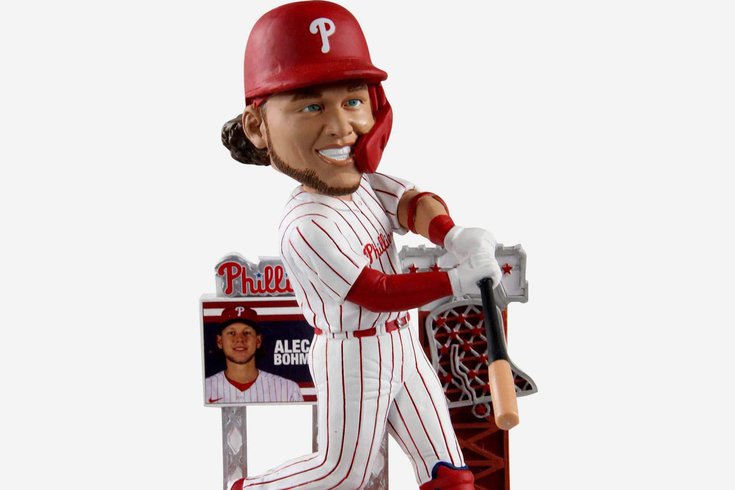 There's something about a bobblehead that makes it okay for grown men to collect and play with toys.

Typically, baseball fans are left to scour the calendar for the bobblehead giveaway days at the ballpark, or poke around garage sales to find abandoned bobblers if in need of a home.

But that's not the only way to acquire a Phillies bobblehead for your mantlepiece, office or mancave.

We've done the hard work for you and found our five favorite Phils bobbleheads, available right now on FOCO.com.

The Phillies star catcher recently hit his 100th career homer and, with a monster contract that is slated to keep J.T. Realmuto in Philly for the foreseeable future, investing in a bobblehead of one of the best catchers in the game is a wise move.

The straw hat — the one the team gives to whomever slams a homer in the dugout — is a part of this figurine which gives it a little slice-of-life appeal. Imagine having a Brad Miller bobblehead with a bamboo plant a few years ago? Click here.

Is Alec Bohm a franchise cornerstone at third base for the Phillies? While his batting average isn't impressive, nor is his early defense, the second year pro and former top prospect is improving rapidly. He also hits the ball harder than nearly any hitter in the bigs.

An early Bohm bobblehead could wind up being quite the collectible. Click here.

Want a more established star? Zack Wheeler is one of the top pitchers in the NL and has a real chance to win a Cy Young Award this season. He is an innings eater, a strikeout machine and putting together the best season for a Phillies starter since Roy Halladay adorned red pinstripes. Bobbleheads need to have slump-busters too. Click here.

Of course, no player is more integral to the current makeup of the Phillies than $330 million man Bryce Harper. Don't let this era of Phils baseball pass you by without putting Bryce — who could eventually help deliver another title to South Philly — somewhere prominent in your home. Click here.

And finally, it would be hard not to acknowledge how ridiculous a year 2020 was, and how refreshing and invigorating it was to see the Pandemic Krew outside Ashburn Alley day in and day out last summer.

This is our favorite of a pair of bobbleheads dedicated to the most diehard of Phillies fans and it's a pretty unique conversation starter. Click here.