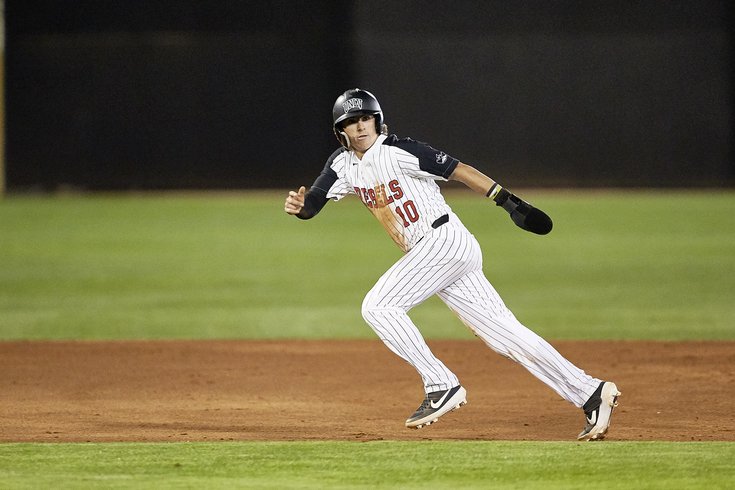 Bryson Stott was the Phillies first round pick in 2019.

If you can't stomach much more of the Phillies' futility on the field (they have blown six saves in their last four games and you're probably still wondering how that's even possible) you can be forgiven. Even the most optimistic of fans is probably getting an undeniable reality check this week. But perhaps the future will be brighter?

Yes, we know the prospect front isn't particularly fruitful — at least that's what Bryce Harper would have you think. But there is some talent in the minor league system worth keeping an eye on. We would say that a lot of these players could be key pieces in a trade this July to help the Phillies contend, but if they don't beat the Mets Sunday afternoon they'll be seven games back in the NL East.

If the Phillies decide to sell over the next month, there's a chance some of these guys get their feet wet in the majors, as Philadelphia needs longterm answers at shortstop, in the outfield and as always, on the mound.

Here's a check in on a handful of young ballplayers who are red hot right now, and others who are ice cold.

The first-round pick two years ago, Stott has found his groove in the minors and if the Phillies keep losing he could be on the fast track to a September call-up. In May, appearing in 22 Single-A games, Stott hit .288 with five homers. He was called up to Double-A to start June and he's been just as effective there, hitting .300 with four homers. With an aging infield, Stott has an open road to an everyday job if he can earn it.

The Phillies top prospect and 2020 first-round pick got his first career win as a pro Saturday, tossing six scoreless innings with eight strikeouts in a gem that saw him allow no hits and one walk. It's a fantastic sign for the best hope for the future of the Phils rotation, who lowered his season ERA by nearly one full run after a sluggish start. Abel is just 19, and it would be music to the franchise's ears if he makes short work of the low minors.

Seemingly out of nowhere, the Phillies' 39th-round pick from 2017 has been absolutely on fire this season. Starting his 2021 in Clearwater, the 22-year-old hit .353 in 17 games, with 21 RBI in that span. Wanting to see more of Stewart, he was moved to Jersey Short where he's continued to hit well, at a .276 rate since flying up north a few weeks ago.

Randolph was making good on his first-round pick status before finding himself on the injured list to start the month of June. Prior to that, he had hit .311 with four homers and 14 RBI.

Drafted as the first overall pick by the Astros way back in 2013, Appel found his way here via trade a few years ago but did not pitch in 2018, 2019 or 2020. He's back, and in his Triple-A debut this season tossed five scoreless innings, good enough to find himself at the bottom of our hot list.

Morales is a good example of just how dire the Phillies prospect pool is when it comes to top-of-the-rotation arms. Ranked as the No. 3 player in the entire farm system, Morales has been god awful pitching in his age 21 season. Over nine appearances (eight of them starts) with the Fightins', Morales has an ERA of 11.33, and has allowed 34 hits in 27 innings, resulting in 34 earned runs. Yuck.

Medina started Saturday and it wasn't good, as he went 4 2/3 innings and allowed five runs. He is 3-5 with a 5.73 ERA in 10 starts this season. He remains a top 10 prospect according to the so-called experts, but for how long?

The good news about the former No. 1 overall pick is that he is still very young, just 23, and has shown flashes of the talent that made him the top choice in 2016. But he was dreadful in a brief opportunity to start in center with the Phillies this spring and he hasn't been much better in Triple-A. He is hitting just .214 for the month of June, though he does have five homers.

The quiet bat for the defensively gifted Gamboa continues, as the shortstop has hit just .133 so far in June after hitting .191 in May.

Ortiz, a top prospect due mostly for his bat, has not wielded it particularly well in June, hitting a meager .231 so far this month. His three home runs all came before June 6 but he has continued to walk at a respectable rate, netting a .339 on base percentage this season.

Rojas is just 20, which makes it a bit easier to swallow his Single-A struggles. The Dominican is hitting .231 so far this season but his average has improved, as it began at .193 to start the month of June.

Another 20-year-old from the Dominican Republic, Garcia is also finding it difficult to get his swing in gear, hitting .225 overall this season and .231 in June. He hasn't contributed an RBI since June 5.

Up until last week, Martin would certainly have found himself in our "hot" section. But after being called up from Clearwater to Jersey Shore, Martin saw his batting average — which was .278 with the Threshers — drop to .143 over the last five games.