Cosmic rays may direct the pathways of lightning

Researchers find new clues about the nature of lightning 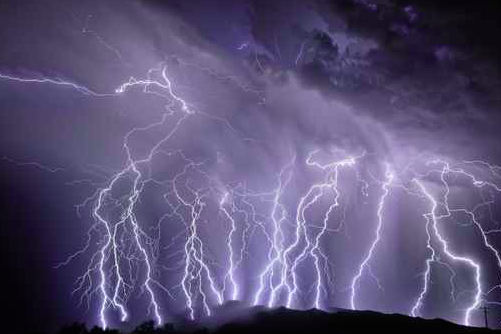 Researchers believe that the interaction of cosmic ray showers and storm clouds may influence the formation of lightning.

Being trapped inside during a thunderstorm can put a damper on outdoor plans. It's even worse if you're sitting on a boat in the middle of a lake with a fishing rod when the storm clouds descend.

Fortunately, nature entertains us with the spectacle of lightning, which, at its best, can outdo just about anything TV has to offer.

We usually think of Earth's atmospheric conditions as the source of lightning bolts, but researchers now believe that cosmic rays have some directional influence on how lightning branches and strikes.

Cosmic rays are high-energy particles created by the explosion of stars, primarily protons that rain down on Earth and collide with particles in its atmosphere. These collisions create new showers, which are primarily electrons.

RELATED STORY: A space odyssey: Cosmic rays may damage the brains of astronauts

In the Netherlands, the Low Frequency Array (LOFAR) observatory monitors the particles from electron showers with thousands of small antennas that detect electromagnetic radio waves. While clear weather conditions tend to create predictable patterns among the radio waves, LOFAR researchers are finding that the electric fields inside storm clouds redirect the electrons and give them distinct characteristics.

Radio astronomy experts at Radboud University in the Netherlands and the University of New Hampshire are now studying the structure of storm clouds to better understand how the electric field within them produces lightning. Their research suggests that cosmic rays could play an important role in carving out the pathways in the air traveled by electric currents that discharge lightning.

To test the theory, the researchers plan to compare the timing of cosmic ray showers and lightning strikes. The details of their preliminary research were published on April 24 in the journal Physical Review Letters.