As a police search began to heat up this week in a Bucks County case involving four missing young men and a "person of interest" in the center of it all, stories and theories involving the case circulated on social media.

One user, Jonathan Riches, created a Facebook group this week that has been a crowdsourcing tool for people to share news articles, information and personal stories pertaining to the case and Cosmo DiNardo, who confessed to committing and/or participating in the killing of all four men on Thursday and agreed to plead guilty in exchange for avoiding the death penalty.

A person with firsthand knowledge of DiNardo's confession told The Associated Press that DiNardo man killed the men separately after selling them marijuana and then burned their bodies at his family's farm, where a massive police search has been underway since Sunday.

Riches, a freelance writer who runs the blog truthseekingsleuth.blogspot.com, has done this type of thing before. He and his wife, Naomi, created similar Facebook groups in the aftermath of the Pulse Nightclub shooting in Orlando and the Ghost Ship Warehouse fire in Oakland.

On it, Jonathan Riches and nearly 1,000 group members are posting wide-ranging content on the case. Along with aggregating news stories and updates, members are posting screenshots of texts and other digital conversations allegedly involving DiNardo, some of which have already been reported on.

Among them are screenshots of messages posted to Facebook by a woman who claimed, in an effort to warn others about the dangers of engaging and meeting with strangers on social media, that DiNardo made multiple romantic and sexual advances toward her in private messages on Facebook.

Bucks County District Attorney Matthew Weintraub announced just after midnight Thursday that Finocchiario's remains were found buried along with other human remains inside a 12-foot-deep "common grave." Authorities have not yet identified the other remains.

Some on social media took it a step further, speculating and commenting on rumors that the Bucks County murder plot is related to another recent case of violence in Philadelphia, in which a 19-year-old man was jumped by several people near Temple University in May. As the rumors go, some or all of the four men may have had information about the North Philadelphia attack, which is headed to an August trial. 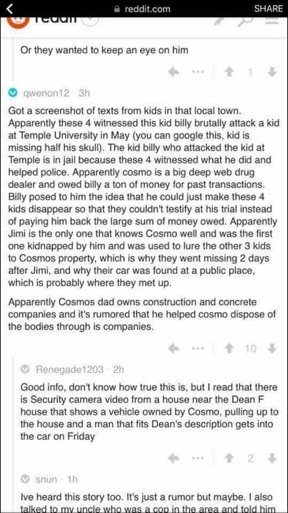 Facebook/Screengrab
Another Facebook user said he has heard speculation that the case is possibly connected with a dismembered body set on fire in Bridesburg last week, and he asked in his post to Riches' Facebook group if anyone else has heard anything further on that.

One Facebook user said earlier in the afternoon that a customer of hers reported seeing a huge bonfire on the DiNardo property from the road on Friday night.

Police have scoured the farmland owned by DiNardo's family in Solebury Township since Sunday.

The other three men who went missing last week are Mark Sturgis, 22, Jimi Taro Patrick, 19, and Tom Meo, 21. Patrick was last seen on Wednesday, while the other three disappeared on Friday.

DiNardo was first arrested Monday on an unrelated gun charge. His father put up $100,000 bail, but DiNardo was back in custody Wednesday after he allegedly tried to sell Meo's 1996 Nissan Maxima for $500, authorities said.

All speculation may be put aside on Friday morning, when Weintraub holds a news conference.

Next briefing is scheduled for 11 a.m. Friday in the 6100 block of Lower York Road. DA Weintraub expects to have add'l info at that time.