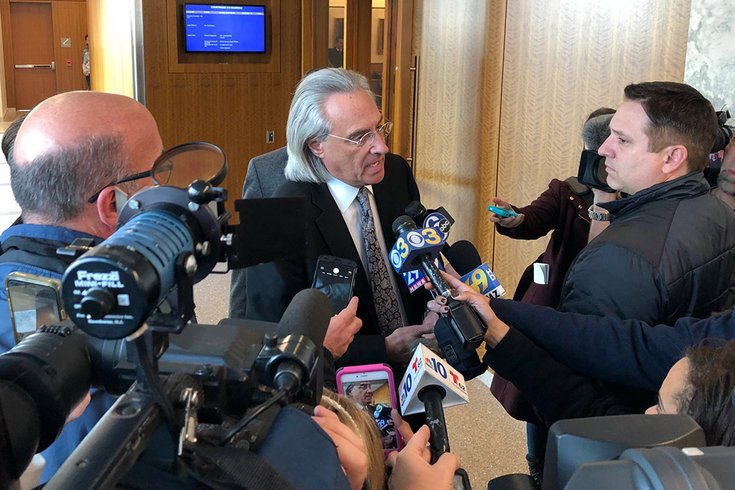 Philadelphia attorney Tom Kline, who represents the family of Dean Finocchiaro, talks with the media after the arraignments.

Cosmo DiNardo made his first courtroom appearance since he confessed to killing four men over the summer at his family's sprawling farm in bucolic Bucks County.

When DiNardo waived his preliminary hearing in September, he did so from jail, appearing via video.

In back-to-back hearings, both men entered not guilty pleas to a litany of charges for their alleged roles in the gruesome quadruple homicide and attempted coverup, including criminal homicide, abuse of a corpse, robbery with the intent to inflict serious bodily harm and various conspiracy offenses.

Each of the victims allegedly was gunned down on the DiNardo family farm after meeting DiNardo for an alleged marijuana deal. DiNardo and Kratz allegedly placed three of the bodies in a pig roaster and lit it on fire before ultimately burying the bodies elsewhere on the 90-acre farm.

DiNardo and Kratz appeared in person and separately before Judge Jeffrey L. Finley in a large courtroom filled with the victim's families, their attorneys and news reporters.

Finley informed both defendants that they have the right to file a mental health or alibi defense. DiNardo previously had been involuntarily admitted into a mental health facility.

The families of the victims mostly remained composed as Kratz – and later DiNardo – entered the courtroom for their hearings. Some dabbed their eyes with tissues, but most simply stared straight ahead.

"It's all just very, very disturbing," civil attorney Robert Ross, who is representing the Sturgis family, told reporters after the hearings. "They're just horrific acts and obviously the families are all just extremely heartbroken." 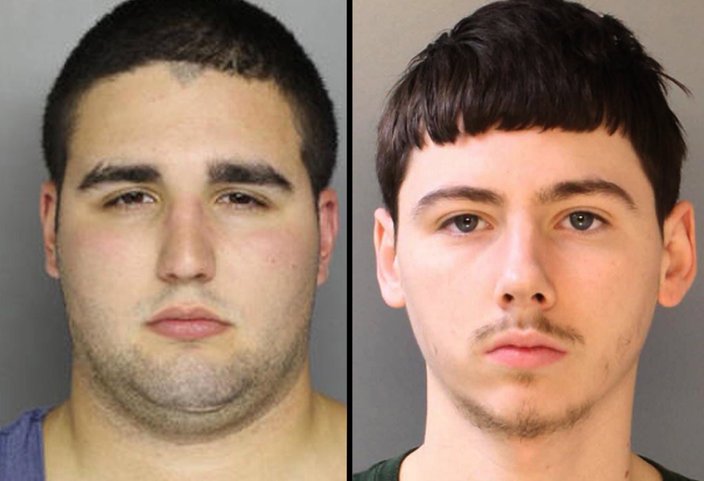 Cosmo DiNardo, 20, of Bensalem and his cousin, Sean Kratz, 20, of Northeast Philadelphia, are charged in the murders of four men at the DiNardo family farm in Solebury, Bucks County.

'NO PUNISHMENT IS TOO HARSH'

Civil attorneys for Meo and Sturgis, however, called for the death penalty.

"The Finocchiaro family supports the death penalty – period," attorney Tom Kline said. "They believe there is no punishment that is too harsh to bring justice to the individuals who caused their son's death. They are fully supportive of the death penalty – make no mistake about it."

On Wednesday, District Attorney Matthew Weintraub filed notices of aggravating circumstances in the case – paperwork that paves the way for prosecutors to possibly seek the death penalty against both DiNardo and Kratz.

But Weintraub said that paperwork was filed out of obligation and should not necessarily be viewed as his intent.

Last summer, prosecutors made a deal with DiNardo to spare his life in exchange for helping investigators locate the body of Patrick, who was buried alone on a remote section of the DiNardo property.

The other three victims were buried in a common grave that investigators discovered during a five-day search that drew national media attention.

"We honor our agreements," Weintraub said. "Should Mr. DiNardo decide to uphold his end of the bargain, we will not seek the death penatly against him. However, if we uncover additional evidence or he seeks to go to trial, that's his prerogative.

"We'll be prepared and we will then, at that time, seek the death penalty."

Weintraub said his office has not determined whether to seek the death penalty against Kratz.

"They're not going to have any influence, whatsoever, on our decisions and how we seek justice in this case," Weintraub said. "We will continue to consult with the families directly, not through their attorneys. We have been doing that on a very regular basis and we're comfortable with the posture of our relationship with each and every one of those four boys' families."

DiNardo entered the courtoom Thursday wearing thick-rimmed glasses and a forest green jacket with orange prison pants. At one point, he glanced back toward the full courtroom.

DiNardo spoke loudly and clearly when speaking to Finley. By contrast, Kratz – who had his arraignment first – spoke in hushed tones when responding to the judge.

HOLIDAYS WITHOUT LOVED ONES

"Although this court hearing was about DiNardo and Kratz, they are undeserving of even a second of our dialogue today," said civil attorney Andrew Duffy, who represents Meo's estate. "This is about a family that just went through Thanksgiving and had to look across the table at an empty chair, a mother who is not going to be buying her son Christmas presents in the next couple weeks."

According to prosecutors, DiNardo shot and killed Patrick, of Newtown Township, with a .22-caliber rifle on July 5 while they were on a remote section of his family's farm. He then allegedly used a backhoe to dig a 6-foot hole and bury Patrick's body.

DiNardo claims Kratz shot Finocchiaro twice with a .357 handgun as he left a barn on the farm, according to charging documents. Kratz alleges that DiNardo shot Finocchiaro.

Later that day, DiNardo and Kratz allegedly shot and killed Meo, of Plumstead Township, and Sturgis, of Pennsburg, Montgomery County, on the farm. DiNardo told investigators that he ran over Meo's body with the backhoe to ensure he was dead.

The men then loaded the three bodies into a pig roaster and poured gasoline on them, according to charging documents. They allegedly set the bodies on fire and left the farm.

DiNardo and Kratz returned the next afternoon and used the backhoe to dig out a massive common grave, burying the tank with the bodies inside, according to charging documents.

Police began searching the DiNardo farm the next day. That commenced a five-day hunt that started as a missing persons case and culminated with the unearthing of the four bodies.

Investigators used cadaver dogs to find the bodies of Finocchiaro, Meo and Sturgis, who were buried inside the pig roaster. But they needed DiNardo's assistance to find Patrick's body.

DiNardo and Kratz are being held without bail at Northampton County Prison.