Could the Cowboys or Vikings trade for Sam Bradford or Chase Daniel? 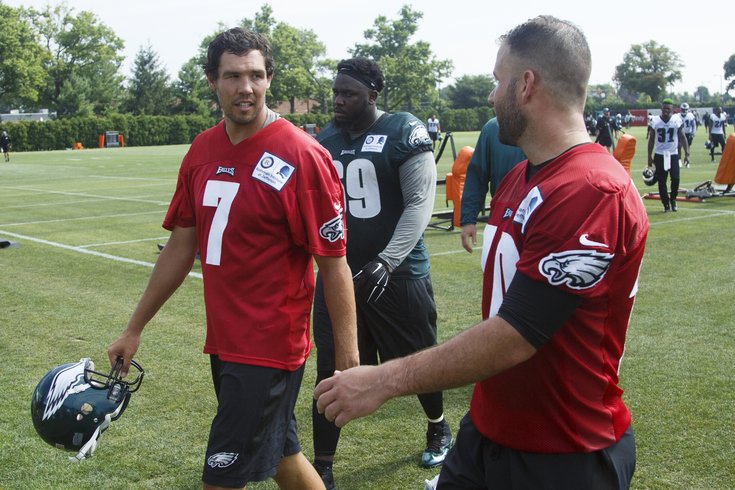 No. That's the short answer. But we'll give the longer one as well.

In our weekly Eagles chat, an overwhelming number of readers asked if the Eagles could potentially trade Sam Bradford or Chase Daniel to the Dallas Cowboys or Minnesota Vikings, seeing as the Cowboys have already lost QB Tony Romo for what looks like it could be half the season, and the Vikings have lost QB Teddy Bridgewater for at least the entire 2016 season.

As we know, the Eagles are flush with three quarterbacks, making it a rare position where they have some depth.

So a trade makes sense for both sides, right? Well, no.

To begin, let's just eliminate the Cowboys right off the bat. Beyond the notion that the Eagles will have zero interest in helping their division rival (and vice versa, for that matter), the Cowboys aren't even looking for a starting quarterback. They feel like preseason phenom Dak Prescott can lead the way until Romo returns.

The Cowboys are seemingly in the market for a player who can back up Prescott until Romo returns ... or in other words, a temporary No. 2 who will soon become a No. 3. Thus, they are not going to be willing to take on any kind of big salary to do so. That would immediately eliminate Chase Daniel, for example, who just signed a three-year deal worth $21 million.

The Vikings would make more sense as a suitor for one of the Eagles' quarterbacks, more specifically Sam Bradford, seeing as many believe they are legitimate Super Bowl contenders this season. However, we've already been through this drill.

Remember when the Eagles had the very same three quarterbacks (or rather Bradford and Daniel, with a Carson Wentz to be named later), and a Bradford-to-the-Broncos deal made sense? That never materialized because the Broncos reportedly felt the Eagles wanted to too much for Bradford, which makes sense, seeing as the Eagles appear determined to win this year.

The Eagles should be in no rush whatsoever to trade Bradford right now, for the following reasons:

Sure, the Vikings are desperate for quarterback help, as are several teams seemingly every offseason. If they were to offer, saaaaay, a first-round pick for Bradford, would the Eagles consider it? Of course. But they won't, because they aren't insane enough to believe that a quarterback with no more than seven wins in any one season is going to learn the playbook in a week and lead them to a Super Bowl.