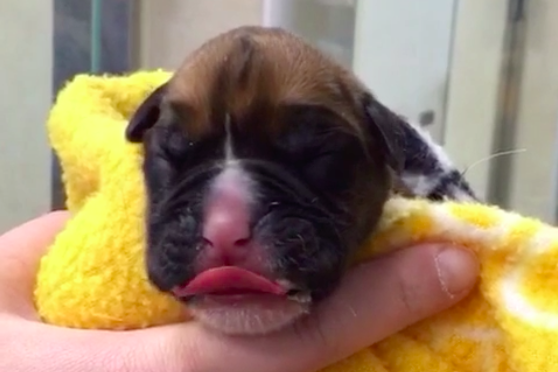 One of the cloned puppies after it was born

A British couple is celebrating the birth of two new puppies who were born using DNA from their beloved pet dog who died earlier this year, The Guardian reports.

Dylan died of a brain tumor in June.

The couple sent DNA from Dylan to the firm two weeks after his death, marking the longest period of time after an animal's death when DNA was successfully recovered for cloning, according to CBS News.

The first puppy, who was born on Boxing Day (Dec. 26), was named Chance, after a character in Jacques’ favorite movie, Disney’s "Homeward Bound." The second puppy, named Shadow after another character in the movie, was born early Monday.

And they called it #PuppyLove https://t.co/C7CemnTiEo

"After they got him out I still couldn’t quite believe it had happened," Jacques told The Guardian. "But once he started making noises I knew it was real. Even as a puppy of just a few minutes old I can’t believe how much he looks like Dylan. All the colourings and patterns on his body are in exactly the same places as Dylan had them."

Read more from The Guardian here.